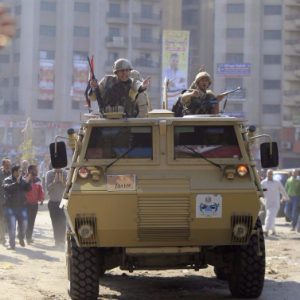 Ahmed al-Araby, 60, is a pensioner from Matariya – a low-income suburb in Cairo that recently witnessed an increase in clashes between Islamist supporters of former president Mohamed Morsi and state security forces. On the four-year anniversary of the January 25 uprising, twelve people were killed in the Cairo district alone, while at least forty-three were arrested. Araby’s 19-year-old son, Mohamed, is one of the many victims of this continued standoff. Police officers stormed into Araby’s home in December 2014 arresting his son charges of spreading false news about the Armed Forces.

“My son’s been in prison for about three months now. He was detained on the charge of spreading false news and disturbing the national interest solely for sharing a video clip on Facebook,” Araby told EgyptSource.

The university student has been in juridical limbo for several months now as he is facing a military trial. There are thousands more like him facing a similar fate.

The advocacy group No Military Trials for Civilians notes that over 3,000 citizens have been referred to military courts in the past five months. Their calculations are based from the time when President Abdel Fattah al-Sisi issued a presidential decree in late October 24 expanding military jurisdiction to include public facilities, such as universities, that have been the epicentre of protests.

This law, according to human rights group, directly contradicts Article 204 of the Egyptian constitution that stipulates civilians should not face military trials unless there’s a direct targeting of military facilities. Under the new law, the expansive legal reach of military jurisdiction to include public facilities enables authorities to easily detain civilians in circumstances that controverts the constitution.

The group says that in just one week, almost 100 students were expected to face military trials including forty-eight from Mansoura University, thirty-one from al-Azhar University and fourteen from Menoufiya University. Omar Tayseer, a Port Said University student, is facing eleven separate trials alone on charges including setting police and interior ministry vehicles on fire.

For Araby the legal battles ensnaring his son are taking a personal toll on his health. “He’s not an activist or involved in political activities whatsoever. It’s a daily struggle for me because I am a pensioner and he’s my only son. My health is not the same it used to because of my diabetes and I am running around between courts and prisons just to see my son,” he adds.

According to Mona Seif, a prominent human rights activist and founder of the group, the spike in civilians referred to military courts in recent months is because Egypt is “in a period of marked repression from state institutions and a form of clear payback against the revolution.”

Seif, whose siblings Alaa and Sanaa are currently serving sentences of five and three years respectively under a controversial protest law, reiterates that four years since the group’s creation, their stance is more critical than ever.

“Our demands haven’t changed: we want a complete stop to military trials for civilians, changing the culture of human rights abuses towards civilians from 2011-2015 and the swift launching of investigations in abuses of the military apparatus with respect to the treatment of its citizens whether it be torture, sexual torture, land-grabbing and compensation for victims of the revolution who were killed under the Supreme Council of the Armed Forces (SCAF) rule,” she told Egypt Source.

In an extensive new paper, legal scholar Sahar Aziz explains that former President Hosni Mubarak used military courts as a means of curbing the autonomy of civilian courts. Despite this, she notes, “From February 2011 to June 2012 thousands more civilians were tried in military courts than the thirty years under Mubarak.”

Under Mubarak, Aziz says, “military courts had jurisdiction to try any crime committed in a location operated by or for the military, including commercial places. These courts were an effective mechanism for expedited prosecution of dissidents because the judges are military officers appointed by the Minister of Defense and the President for two-year renewable terms.”

This trend has worsened since the revolution, and in Seif’s view Egypt has witnessed a “militarization of the civilian judiciary,” whereby the same egregious tactics of trials being held in secret and limited access to lawyers, have spilled over into civilian courts popularly touted as independent by Egyptian authorities. Seif’s brother Alaa Abdel Fattah was sentenced last June when the judge summarily issued his verdict to an empty courtroom without giving the defendants the opportunity to attend the rushed session.

Seif adds, “being at a building affiliated with the interior ministry to see my sister and her friends and not being able to go inside to check up on her mirrors the experience of going to a military court where courts are inaccessible to the public even if you are a witness or lawyers, let in on a whim after they endure abuse from the authorities. These are all practices of what we term the militarization of the civilian judiciary.”

Araby has not seen his son in three months and is worried about his mental health status. He recently discovered through a lawyer working with the No Military Trials group that his son’s charge has been escalated from a misdemeanor to a felony, and he could end up in prison for an indefinite period.

In an opaque and complex legal system, Seif and other activists advocating for prisoners such as Mohammed al-Araby, are pragmatic and hard-nosed about prospects of slow reform. “I am not optimistic because the situation has worsened considerably, the state’s oppressive belligerence has become scary but we have no other choice but to go on” she says.

Farid Farid is a journalist based in Cairo. His work has been published in various outlets including The New York Times, The Guardian, Egypt Independent and in academic journals including Social Semiotics. Follow him on Twitter: @FaridYFarid