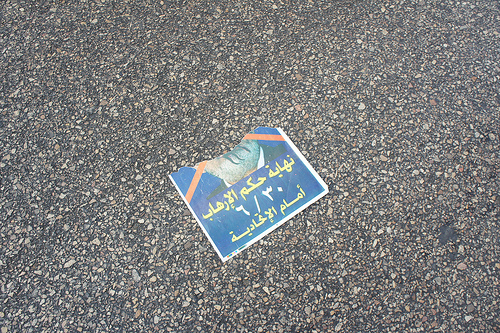 As Egypt is witnessing unprecedented protests across the country, with millions of citizens calling for President Mohamed Morsi to step down, the military has come out with its most direct statement yet—giving Morsi and the political forces forty-eight hours to reach consensus, or the military would be forced to step in and enforce its own roadmap for the country’s future. A few hours later, the military followed up with a second statement denying an impending coup and reiterating the fact that the Armed Forces has no desire to resume a political role in Egypt.

In its previous statement, the military gave Egypt’s political forces one week, until June 30, to reach a consensus. In it, al-Sisi said that an attack on “the will of the people” would not be tolerated. It was not clear, however, whether the will of the people came from the ballot box or from street protests. After the unprecedented protests seen throughout the country, demonstrating the extent of the people’s dissatisfaction with Morsi and his government, it would appear that the military places just as much importance on protests as it does on elections.

In the statement, al-Sisi spoke admirably of the protests currently taking place, while also subtly admonishing their political leaders. The lack of political consensus, al-Sisi said, “led the people to persistently and autonomously take to the streets in an impressive way, which has raised admiration and attention inside and outside of the country.” He went on to say that if the people’s demands are not met within forty-eight hours the armed forces would be “obligated” to present a roadmap for the future, working in collaboration with the various political factions, as well as the youth, “without sidelining anyone.”

Quickly after the statement was broadcast, Egypt’s presidency, in what appeared to be a move to show it is still in command, published a photo of a meeting between Morsi and al-Sisi on its official Facebook page. It was not clear when the photo was actually taken. Reports, however, have begun to emerge of military action in the governorates, including dismissing the Morsi-appointed governor in Fayoum.

Despite the military’s track record in leading the country through an unstable transitional period following Mubarak’s ouster, al-Sisi’s statement was welcomed by many, including Tamarod, the youth movement spearheading the protests, which secured 22 million signatures withdrawing confidence from Morsi. “The army responding to the demands of the people crowns our movement,” Tamarod spokesperson Mahmoud Badr said. It is unclear, however, whether or not the military roadmap will adhere to Tamarod’s own roadmap– which, among other things, calls for early presidential elections, while the head of the Supreme Constitutional Court serves as acting president in the interim.

The opposition coalition, the National Salvation Front (NSF), issued a similarly welcoming statement, and even the Muslim Brotherhood’s Freedom and Justice Party described the military statement as “optimistic,” seeing it as an opportunity for genuine dialogue among political forces. In a tweet, the Brotherhood’s official Twitter account said the opposition would like to interpret the military statement as a coup against the president, adding that it is not, describing the military as a “patriotic institution.” Apache helicopters flying the Egyptian flag over Tahrir were met with cheers, as the square “erupted in joy” following the statement, while chants of “the army and the people are one hand” could be heard in the protest at the presidential palace.

The pressing question on everyone’s mind now is, what next? It is a question that is near impossible to answer. Both the military and the ministry of interior gave clear indication that they have all but abandoned the presidency, with the latter announcing that it would take no action against officers who join the street protests. Meanwhile, the Salafist Nour Party, often taking a unique stance, once again offered a possible solution to the deadlock prior to the military statement, recommending that Morsi call for a public yes/no referendum on whether or not he should remain in office. This may, however, be too little too late.

A political force that has been unable to see eye-to-eye in a year will reach no agreement in forty-eight hours. If forced to step in, the armed forces—having learned their lesson—would likely appoint a civilian leader, while playing a role behind the scenes in guiding the country to the next step. Following the Tamarod roadmap would ensure an end to street protests and bring the NSF and opposition in line with military expectations. Any government that is to take over the reins of the country must be united, otherwise it is doomed to fail.

Missing in this unified equation, however, are the millions of Islamists who have taken to the streets in the past couple of days declaring that the president’s legitimacy is a red line. If the military does find itself faced with the self-appointed task of forming a government, it could also find itself facing a serious threat to national security, with comparisons to Algeria already emerging on social media.

If the Muslim Brotherhood were to sacrifice Morsi, once referred to as the ‘spare tire’ candidate, how much control they exercise over their Islamist allies is suspect. Morsi has already come under fire from more conservative Islamists who feel he has not applied Sharia law satisfactorily in Egypt. His removal by the military may only galvanize a response far more violent than was witnessed in the past year. There are elements within the hardline Islamist current who have resorted to inflammatory and violent rhetoric over the past year. At a rally in support of Morsi several months ago, for example, Safwat al-Hegazy said, “Those who spray us with water, will be sprayed with blood.” Faced with a real threat to what they view as their legitimate president, that rhetoric could become a reality.