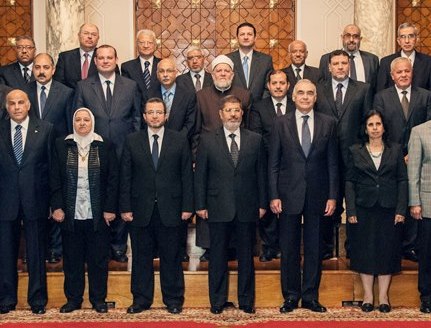 In an effort to improve government performance, President Mohammed Morsi introduced a limited cabinet reshuffle, in which a number of ministers from Hisham Qandil’s government were replaced. Most striking among the replacements was the appointment of Judge Hatem Bagato as Minister of Parliamentary Affairs, as well as the appointment of Judge Ahmed Suleiman as Minister of Justice.

To better understand the rejection of Bagato’s appointment both within the judicial and political sphere, it is worth bearing in mind the fact that Bagato was the Secretary-General of the Presidential Elections Committee (PEC) in May and June, 2012. As secretary-general, he assumed a caretaker and management role of electoral procedures. This constitutes a grave conflict of interest and is a serious violation of the  "assumed neutrality" of the Presidential Elections Committee, with the appointment of its secretary-general  as a minister in the government of a president who won these very elections. Such a move could, rightly or wrongly, create suspicions that this appointment might have been an “electoral bonus” or “payment” of sorts.

At the time of the elections, supporters of the Islamist movement themselves raised doubts about Bagato’s impartiality in his role in the PEC. What has since changed to enable him to become a minister in the government after his impartiality was questioned? Bagato was appointed as Minister of Parliamentary Affairs while it is a known fact that the current government is temporary, until a new House of Representatives is elected. Until that time, is the Shura Council the ‘parliament’ which Bagato’s ministry is in charge of? Bagato knows that the Shura Council is considered an invalid body and is not entitled to assume legislative power. When serving as an SCC judge, Bagato himself participated in rulings that stated the People’s Assembly Law was unconstitutional. This is the very same law under which the Shura Council was elected. How can he then accept being the minister of a representative council, knowing that the law under which it was elected is unconstitutional?

Morsi decided to appoint Judge Ahmed Suleiman as Minister of Justice, replacing Ahmed Mekki. Suleiman is one of the judicial figures involved in the “Judicial Independence Movement.” The movement emerged under former president Hosni Mubarak’s rule, beginning in 2005 when the role of the Judges Club in Egypt became increasingly prominent. The movement became known for its antagonism toward the ruling authorities. Among its most prominent figures were Zakariyah Abdel Aziz, the former president of the Judges Club, Ahmed Mekki, the former Minister of Justice who resigned from Qandil’s government, Mahmoud Mekki, the Morsi-appointed vice president who resigned after the newly drafted constitution eliminated his post, and finally Hisham Geneina, appointed by Morsi as head of the Central Accounting Organization. It appears that Morsi is following Mubarak’s model of reliance on a single faction or specific group, by concentrating his cooperation and decisions on making appointments from this group. Since Morsi assumed the presidency, we have witnessed complete reliance—as previously mentioned—on figures from the Judicial Independence Movement for important posts in his administration. This reflects the limited circle upon which he relies and also suggests that decisions are made based on “loyalty” and not on “competency” or validity as the president and the Muslim Brotherhood often repeat.

Furthermore, in an attempt by Morsi to avoid repeating the gross legal and constitutional mistakes he had made, he issued a resolution to form a legal committee under the auspices of the presidency charged with looking into the legal and constitutional aspects of presidential decisions. The committee is made up of 16 members, one lawyer (an official Muslim Brotherhood lawyer), five law professors, and ten judges. It is worth noting the appointment of judges to this “administrative” committee that is nevertheless political in nature. The committee is charged with looking into presidential decisions in order to determine their legality and legal soundness, an aspect where politics can play a powerful role. There is no doubt that this committee is another example of a judicial “conflict of interest.” The judges belong to the judicial authority and confront presidential decisions when exercising their duties. It is, thus, unacceptable for a judge to be a member in an administrative council under the presidency.

For appointments to this committee, the president should depend on retired judges as their professional connection to the judiciary has ended, in addition to law professors and lawyers. A judge, however, who has agreed to play this role in the presidential palace should resign from his judicial work.