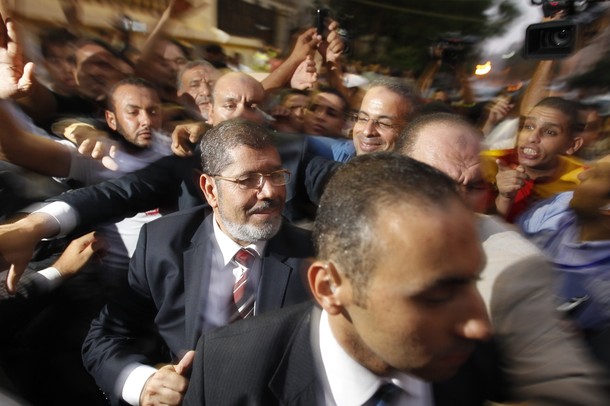 As President Mohamed Morsi and the Muslim Brotherhood slowly appropriate power, they consistently issue an unspoken theme: Trust us. They do not say so, of course; that no one should be trusted is a platitude in politics. Rather, at each step from the revolution through the transition to the presidency, they speak of consensus, broad-based governance, and the will of the people. Then they proceed to act unilaterally, and the process repeats.

The worried Coptic voice interprets this as a grand scheme to implement an Islamic state. The frustrated liberal voice interprets it as evidence of their Machiavellian lust for power. Both may be right.

But what if the Brotherhood really means it? ‘Trust us’ may not result in everything the Copt or the liberal desire, but it may reflect a real Brotherhood wish to honor the goals of the revolution in respect to the conservative social reality of Egypt.

Or perhaps I have the wool pulled over my eyes.

In November of last year following the Islamist victory in the first round of parliamentary elections, I interviewed Youssef Sidhom, editor-in-chief of the Coptic newspaper Watani. Imagining I would hear alarm bells from an intellectual leader in the community, I was surprised by the exact opposite.

“I believe the Muslim Brotherhood wants to prove they can create a form of democracy,” Sidhom said, “that respects the rights of all Egyptians.” He went on to describe several positive pre-election meetings with Brotherhood leaders, from which he was convinced they were ‘decent people’.

Yet when asked why they would not submit to a consensus over binding constitutional principles, his answer has echoed in my mind in all events since.

“Perhaps … they don’t want it said, ‘They did so only because they were forced to.’”

If Sidhom is correct, the Brotherhood wants its due as the primary political force in Egypt. Yes, the first round of presidential elections showed their support tops off at around 25%, and if Islamist votes are collected they can lay claim to 40%. Though this indicates the majority of Egyptians do not want Islamist government, the plurality of support for the idea far out-trumps any organized liberal vision.

Whether or not this is true, it fits with the Brotherhood self-conception as a vanguard. In March 2011, far before Egyptian politics became contentious, Deputy Guide Khairat al-Shater addressed a congregation of Brotherhood faithful.

“The Gama’a [group, that is, the MB],” he said, “is not an instrument of conflict or competition. The Gama’a is an instrument of integration and rallying of the entire nation in order to build its renaissance on the basis of Islam.”

Shater was clear the Brotherhood intended the full Islamization of life, and moreover, of leadership of the world. But when he spoke of the particulars as concerns Egypt, his definition – to his own people, not a Western audience – was quite liberal.

“We don’t want the autocracy to return once again,” he said. “For this to happen, the revolution needs … to push for the achievement of as much of its objectives as possible…

“So as to keep a guarantee that the current government or any future government commits to the interests of the people, to building a stable political life including peaceful rotation of power, independence of the judiciary, rule of law, security, and attempts to develop the country and people and fix [their] problems.”

Shater disavows that this should necessarily involve their ascent to power.

“Our preparation for the stage of Islamic government does not, as the secularists understand it, entail us striving to reach the seat of government ourselves, no. Our one and only concern is for there to be a government that is … keen on establishing the lives of people on the basis of Islamic reference, whether it be us or someone else.”

The case can be made that if the goal of the revolution was to unseat the old establishment of power and military custodianship of government, only the Muslim Brotherhood could accomplish this. Perhaps it could have been done better through full cooperation with liberal forces. Yet liberal forces either sincerely feared the Brotherhood would not be sufficiently liberal, or else sought to undermine them in appeals to the governing military council. In either case, they were not willing to let the Brotherhood be the vanguard.

The Brotherhood, meanwhile, was certainly Machiavellian in its politics, also in reference to the military council. But step-by-step in their consolidation of power, they are refusing to allow anyone to say they were forced, by the military, the courts or anyone else, to deliver democracy.

Sacking Tanatawi and Anan? Check. There is no co-presidency or constitutional declaration to confine us.

Seizing control of the constituent assembly? Check. The constitution produced will be under our auspices.

Taking authority of state newspapers? Check. We will not allow ourselves to be slandered in the press.

Now, the manner in which this has been done has produced the exact opposite reaction. Few political forces trust them, and fear is even more rampant that they will seize full control of the institutions of government. They may well; but to what end?

A careful reading of events shows that in each case the Brotherhood has been very careful. Each move can be understood not as Islamist, but as necessary preparation to secure the goals of the revolution.

Returning to Sidhom today, his faith is not as strong as it was, but his read of the situation is similar.

“Morsi is pushing all civil and military forces out of his way. Why? But it must be said that until now we haven’t seen anything concrete to implement an Islamic state.”

Sidhom is very wary, and he is ready to take to the streets if necessary. But for him, the key indicator is still coming.

“I stand waiting for our greatest challenge – the writing of the constitution. When they finalize their work I can say more confidently if they have good intentions or a hidden agenda.”

The only question is if it will then be too late to have a choice in the matter.