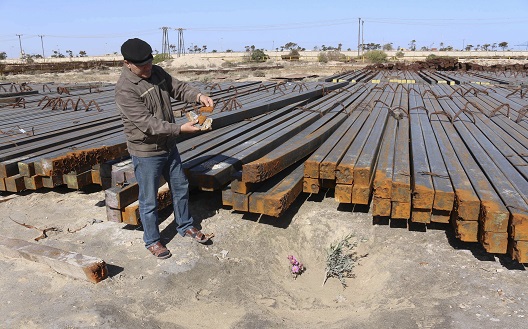 Observing events in Libya since the revolution has often been like watching someone set his dining room table while the house is on fire. Urgent problems go unattended while people try to act as if everything were normal—or at least as if there was no active conflict: the international community trains recruits for an army that does not exist; Libyan youth go to school to train for jobs their country cannot provide. This is especially true of Libya’s economy. Last year, representatives from the Libyan National Oil Company and Ministry of Oil encouraged international oil companies and foreign governments to discuss potential tenders and partnership opportunities at an oil and gas summit in London. At the same time, Ibrahim Jadhran had halted production at around 60 percent of Libya’s oil ports and other installations for around six months. Neither Libya nor its international partners in the West have been able or willing to address the root causes of the growing economic crisis.

The myth of Libya’s wealth come from a place of truth: superficially, Libya had the potential to be an economic powerhouse in the Maghreb after the 2011 revolution: it has the largest oil reserves in Africa, a small, educated population, and it engaged in early efforts to establish better trade relations with its neighbors and the West. Yet if one scratches just below the surface, weak, dysfunctional institutions contorted to funnel money to a dictator’s pockets and ill-advised macroeconomic policies systematically robbed Libya’s future development. In the past, budgets were established based on the assumption that oil production and prices would remain high and stable. But oil production and export and oil prices continue to fall far below expected levels, causing the central bank to bleed its reserves and the deficit to grow. It will not be as easy for Libya to recover should the conflict end because the extensive structural destruction to their largest oil port, Es Sider, prohibits an immediate resumption of the same levels of exports.

If the current fighting does not crush the aspirations of the revolution, economic collapse may do so. Libya’s money woes, especially the fate of its oil sector, which provides the majority of government revenues, have been a cause and consequence of the conflict. Without the rule of law and effective police and military institutions, policymakers fear for their personal safety and put off reforming subsidies and cutting the salaries of those who participate in the conflict. The security vacuum has left oil installations vulnerable to closures or attacks by non-state actors. Corruption has been a significant problem for years, and no government entities have been able to enforce responsible or transparent spending. On the other side, Operation Dignity’s armed takeover of the Central Bank branch in Benghazi and efforts to syphon oil revenues from the Central Bank headquarters, and the intense reaction from authorities in Tripoli, as well as intensified lobbying efforts in the United States, UK, and other countries holding Libyan assets, illustrate how important Libya’s dwindling reserves are to both sides’ quest for dominance.

The economic crisis began long before the Tobruk-backed Operation Dignity or Islamist-backed Libya Dawn butted heads. In the last few months, however, the conflict-fueled decline has received more media attention. Atlantic Council Nonresident Fellow Mohammed Eljarh and Libyan writer Hisham Matar recently provided poignant descriptions of the heavy toll of war on personal security and access to services like hospitals, electricity, education, clean water, and household fuel. Economic collapse would force Libya to succumb further to well-funded extremist groups and would increase Libyan factions’ reliance on wealthy patrons with their own interests, prolonging the conflict. As more children have less access to education due to the conflict and face fewer opportunities to study on government scholarships overseas, a generational decline in the quality of Libya’s labor force appears more likely. Libya’s economy must undergo drastic changes to avoid this fate. On January 15, the Central Bank recognized this fact when it announced that it had to undertake painful austerity measures because its funds had been “drained.”

International financial institutions have urged Libya to take reform measures for years, but without a wildly successful political settlement the Libyan authorities themselves will be unable to work together to reverse these trends themselves. The few international private sector entities operating in Libya do not have the incentive to pressure Libyan officials to confront the situation, despite recent destruction of assets at oil installations and ports throughout the country.

Pessimism surrounding the trajectory and pace of UN dialogue efforts has provoked the international community to think of how it can intervene more directly. The West has only a few, less-than-ideal options to reverse the spiral into economic collapse. In the event parties to the Geneva negotiations do agree to a national unity government in the near future, it might be possible for the West to do more. Nevertheless, any intervention should aim to help address the underlying causes of the crisis, not merely bring destabilizing forces to a negotiating table or prevent wasteful spending.

Recently western analysts and the EU have considered whether international actors could or should administer a trust fund containing Libya’s oil revenues, existing reserves, and sovereign wealth funds. Such a fund would finance budgets to avoid further economic instability while separating Libyan policymakers from everyday decision-making. This fund would enable Libyan policymakers to finally cut militia salaries and implement pre-existing subsidy reform and other austerity policies without fear; they would deflect the outrage among militias. The organization providing technocrats to administer the trust fund could simultaneously provide technical assistance to Libyan bureaucrats to hand responsibilities back to Libyan authorities as soon as possible. But such a trust fund would be a hard sell to Libyans, who distrust foreigners to manage their oil revenues—their “national wealth.”

A second option for countries holding Libyan assets would involve freezing them to avoid misuse. The United States already announced that it would safeguard local Libyan assets from being used to promote terror or war on January 18. From attempts to freeze assets during the Qaddafi regime, UN members know well that this is easier said than done. Libya’s foreign assets are scattered throughout the world, sometimes in countries that have limited ability to fulfill an actual freeze. It is also unclear how countries would determine assets intended to finance nefarious activities versus efforts to rebuild the country. Freezing assets would likely put further strain on every day Libyans and do nothing to solve the underlying reasons for the dysfunction.

A more passive option for the West would be to wait for Libya to fall into bankruptcy and go door-to-door for financial relief. If Libya qualified for an loan from the International Monetary Fund (IMF), it would be compelled to implement many of the reforms it has avoided. But Libya is not qualified for an IMF loan, or any similar loan for that matter. It is not considered bankable by any recognized lending agency and no creditor could expect to be repaid given Libya’s track record since the revolution. Instead, Libya would have to go to individual lenders for grants. The countries that would provide those grants may not have Libya’s best interests in mind and attach conditions to the grants, which may prolong the conflict. But providing grants could also be an opportunity for countries to put pressure on Libya individually to take actions that could right its transitional trajectory, such as austerity measures, human rights reforms, or restructuring of security and justice institutions. Ultimately, a cocktail of all these options may be the most appropriate remedy. Regardless of how the international community responds, or the fate of the UN-sponsored political dialogue, Libya faces a long and painful road to economic health.

Lydia Sizer is a consultant on North African affairs based in the UAE. She previously served as a Libya Desk Officer at the US Department of State from 2012-2014.

Image: An employee examines shrapnel at site of a recent air strike at the Libyan Iron and Steel Company (Lisco) in Misrata January 26, 2015. A power struggle between two rival governments that threatens to tear Libya apart has started to take its toll on Misrata, an important shipping and industrial hub that had shrugged off the turmoil until now. Production at the country's biggest steel works has been cut and the port of Misrata has been forced to restrict operations. REUTERS/Hani Amara