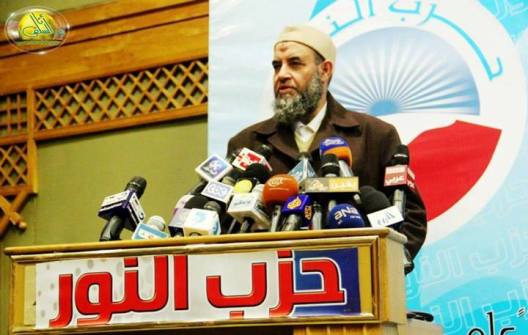 While emerging unexpectedly in the wake of the January 25 revolution, the Salafist political trend is one of the few Islamist movements still involved in the current political process, in the form of one of one of the largest Salafi political parties – the Nour Party. While giving cover to the current government, with a modicum of political inclusion appearing through the Nour Party’s involvement, the Islamist party itself has continued to play an intelligent political game, influencing the process where its own interests are concerned, but carefully avoiding the messy responsibility of the transitional phase placed on Hazem El-Beblawi’s cabinet.

The Salafi current made fast gains in Egypt’s first post-Mubarak parliamentary elections. The Nour Party became the second largest democratically elected political party in 2012, holding about a quarter of parliamentary seats. It has since cemented itself as a key player in each phase of Egypt’s rocky path to democracy.

This new found political immersion marked a clear ideological shift from the traditional Salafi philosophy that previously frowned upon any form of political deviation towards the state. Even more striking is the party’s recent pragmatic rupture with the Muslim Brotherhood, opting to back the popularly supported military ouster of Morsi on July 3. After supporting former Brotherhood candidate, Abdel Moneim Aboul Fotouh in the first round of the presidential election, the Nour Party aligned itself with the Brotherhood in the runoffs, backing Morsi’s candidacy against Ahmed Shafiq.

The Nour Party’s support of Morsi and the Brotherhood, however, did not last. “Owing to the Brotherhood’s mismanagement of the state and increased estrangement, we aligned with the secular National Salvation Front several months ago,” party spokesperson Nader Bakkar explained.

While the Nour Party has distanced itself from the Islamist current, and is not a member of the National Coalition to Support Legitimacy, calling for Morsi’s return, it continues to behave as a free agent, condemning attacks on the Muslim Brotherhood, the armed forces, and secular movements, as the need arises.

Such paradigm shifts lead to further confusion about the Salafists and their ideological practices and beliefs. “There is no tailor made education or formula to become Salafi,” explains Dr. Hatem al-Hajj, the former advisor to Nour Party Chairman Younis Makhioun and the Head of Foreign Relations Committee who left the party following internal divisions earlier this year. “As Muslims, we are all Salafi by default. Some people just choose to adhere to the Salafi philosophy.”

Since Morsi’s ouster on July 3, the Nour Party has consistently refused to participate in the interim political government. They refused both cabinet and gubernatorial positions, whether under ousted president Mohamed Morsi, or under the current interim government, while still playing a key role in the selection of the candidates. Their alleged refusal of Inas Abdel Dayem is said to be the reason she was passed up for minister of culture.

The Salafist party has also denounced what it perceives as “military appointments,” stating political participation will only be accepted via democratic elections. This proclaimed neutral stance should safeguard the party from further backlash and accusations related to its involvement in what most of its fellow Islamists deem a coup.

A Shift in Position

Despite an initial bid to refrain from political participation after Morsi’s ouster, the Nour Party recently decided to join the fifty member committee selected to propose amendments to the 2012 constitution.

Incongruously, the Nour party remains a staunch critic of what it terms the  undemocratic procedures involving the constitutional process. The Nour Party criticized not only the actual breakdown of the committee, but its selection process as well, having called for selection through a democratic electoral system. Additionally, the party was critical of a proposal that allows for judiciary review of the constitutional amendments prior to parliamentary elections. Amr Farouk the Chairman Assistant of Foreign Affairs complains that such unconstitutional mechanisms will prolong instability and facilitate a one party monopoly of power.

The key article in question is Article 219, which explicitly defines Sharia as the main source of legislation, and was recently removed from the constitution by a ten-member committee of legal experts. Farouk warns that its elimination will be detrimental to the country’s ‘Islamic identity.’ The party has said that it is willing to relinquish its insistence on maintaining Article 219 in exchange for a modification of Article 2. The modification in question, however, is no small matter – with the Nour Party calling for the article to read “Islamic sharia is the principal source of legislation,” rather than the “Principles of Islamic sharia.” Another priority for the party is the removal of Article 6, which prohibits the formation of religious-based parties. The ultra orthodox party’s reliance on Egyptians intrinsic piety in this battle is unmistakable.

The party stated that is participating due to a sense of responsibility towards the Egyptian people, and to ensure that all political perspectives are represented. Accordingly Farouk says the party’s duty is to participate as a balancing tool against the institutional influences over the constitutional committee.  “All political currents should be integrated in the constitutional processes,” he explained.

There are only two Islamist representatives on the fifty member committee, one belonging to the Nour Party, while the other, Kamal al-Helbawy, does not belong to a specific party. In fact, Helbawy is a staunch critic of the Muslim Brotherhood, having left them after Khairat al-Shater’s nomination for the presidency, after over twenty years with the organization. The Nour Party is now demanding that Helbawy not be identified as an Islamist representative.

The Nour Party has carefully calculated its moves and is currently using its independent position opportunistically, as reflected by its participation. “Al Nour is priming itself to become heir to the Islamic current in Egypt,” political sociologist Dr. Saad Eddin Ibrahim explains. Their attempt to dissociate themselves from al-Helbawy’s role in the constitutional committee only further cements this thought.

Political Sociologist at the American University in Cairo, Dr. Said Sadek points to the financial impact Gulf countries, particularly Saudi Arabia, in helping empower the Salafist party to make independent decisions.  He also points to Nour’s sense of betrayal at the hands of the Brotherhood as another motive behind the party’s shift. The Nour Party’s growing resentment toward the Brotherhood can be attributed to the latter’s failure to allocate the party any appropriate ministerial offices. During Morsi’s presidency the Nour Party boycotted Hisham Qandil’s cabinet when Morsi failed to fulfil his promise of offering them three ministries and the vice presidency, offering instead only the ministry of environment. This pattern, however, continued with the post-Morsi cabinet, when the Nour Party turned down the agriculture and environment ministries.

The future of the Salafist current in Egypt according to analysts like Sadek, remains unclear. It is still too early to determine whether the Nour Party, once labeled as the ‘dark horse’ of the upcoming parliamentary elections, has the potential to dominate the Islamist scene in the wake of the Brotherhood’s political descent. What remains clear, however, is the party’s pragmatic political ambitions.

“We backed Morsi’s ouster to safeguard the reputation of the Islamist stream, facilitate future political participation and prevent further carnage,” the head of the party’s female wing, Hanan Alam, says. Whether the Salafis will triumph in the upcoming elections, refrain from participation for a set period or withdraw entirely from politics following its early practices, remains to be seen. If the Nour Party continues on its current path, its presence in parliamentary elections is all but guaranteed.