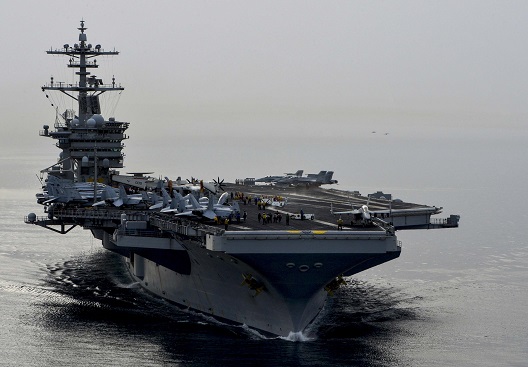 President Barack Obama, in his interview with Tom Friedman on April 5, was at his intellectual best. He convincingly explained the framework agreement with Iran while stressing serious strategic disagreement with Iran’s Supreme Leader Ali Khamene’i. Tom Friedman, in turn, was at his diplomatic best, trying to nudge the President into crafting an Obama doctrine on air. Here’s what emerged from the discussion: Engagement is always possible, it can bridge the gaps between adversaries; the United States will engage (as with Iran), while keeping all options on the table. The President also reminded, “We are powerful enough to do this without putting our interests at risk.” One can afford to be magnanimous and take the risk for peace when one is strong, a message that applies equally well for US policy on Iran and US advocacy of democracy to its Arab friends and allies in the Middle East. On all fronts, however, the President has not succeeded in convincing friend or foe to take his advice.

Several US presidents have had foreign policy concepts that helped define US global interests and shape foreign policy. The Monroe Doctrine defined the Latin American sphere of influence from 1823 to the present; the Truman Doctrine launched the Cold War containment policy; the Carter Doctrine defined the US national interest in the Persian/Arabian Gulf; while the Reagan Doctrine, backing anti-Soviet forces and parties, launched policies and initiatives that contributed to the eventual demise of the Soviet Union and eroded its sphere of influence in Eastern Europe. An Obama doctrine of such clarity and effectiveness has yet to emerge.

As a critic of the P5+1 talks from the start, I must admit to having been won over by the President’s justification of the endeavor and his explanation of why the deal, if agreed to by all parties concerned, would indeed significantly retard Iran’s ability to produce undetected an atom bomb. The current framework agreement, if fleshed out properly by end of June, presents the best option under current circumstances—certainly better than no agreement, which would leave Iran with the option go forward with their nuclear build-up or a war which would devastate Iran and have dangerous long-term consequences for the region and the US national interest. An agreement may or may not emerge by the end of June, but the true test of a turnaround with Iran will come from getting Iran to work with their neighbors on conflict resolution rather than conflict exacerbation. From Syria to Yemen, that desired outcome is nowhere in sight.

Iran remains unconvinced by US diplomacy or deterred by US power from supporting the murderous Assad regime in Syria. Iran and Hezbollah’s words on Yemen are confrontational and it is ironic, to say the least, that US Secretary of State John Kerry says that the United States can reward Iran on a nuclear deal while punishing them on support to the Houthis of Yemen. Such a stance would only see the end of US sanctions in June (if an agreement is signed), only to slap them on again if support for the Houthis continues. Working with Iran’s Revolutionary Guard (IRGC), even indirectly, in an effort to defeat ISIS does not convey US displeasure with IRGC terror tactics around the region nor does it convince those fighting for democracy in Syria and Iraq that the United States is on their side.

In Yemen, the Saudis have put together an impressive coalition of the willing as an Arab force to fend off the Houthis. If institutionalized, this force could intervene elsewhere in the region. But an Arab “force de frappe” may be an idea whose time has come and gone. Given the sectarian divide in the Saudi-Iranian rivalry, this force looks and acts as a Sunni coalition against Iran and the Shia forces supporting it in the region. Tactically, such an Arab force could have played a useful role had it buttressed the GCC transition plan for Yemen in 2011. It would then have been perceived more benignly. Even as late as 2014, such a force could have deterred the Houthis from marching on the capital had it been deployed in Sana’a early enough.

Now that the Saudi-led force has demonstrated its power in Yemen, President Obama can feel vindicated in having advocated for Arab self-help. Yemen lies on the edge of collapse, however. If this war continues, it would result in a humanitarian disaster of the first order. This is the time to show how the other part of the doctrine—namely engagement—works. Given its demonstrated support (in intelligence sharing and logistics), Washington should now suggest a show of magnanimity. Specifically, give peace a chance and show the Houthis and Iran that they can be equal partners in conflict resolution and help the Yemenis get back to the business of building the future of their country. US naval action came too late to deter either Houthi or Iranian movement. Doing it now increases the chances of a mistake that could lead to a broader regional war. It is not too late however to lead through diplomacy.

President Obama has invited the Gulf Cooperation Council (GCC) states for a summit at Camp David on May 13. This meeting presents an opportunity to tie the Yemen conflict to the broader regional one and lay out a clear US strategy. The GCC countries should be encouraged to convene two summits in quick succession: a Yemen-focused one and a broader regional one. Both summits should feature Saudi and Iranian participation. The conflict between the two has complicated, if not actually spawned conflicts in Lebanon, Syria, Iraq, Bahrain, and Yemen. Saudi Arabia and Iran should be encouraged to explore potential partnership in the region. If Iran leans on its Houthi allies and Saudi Arabia leans on its friends in Yemen, a summit in Doha or Muscat (Doha having offered its honest-broker services before and Muscat having stayed out of the current fray) could take place relatively quickly. Abdelmalek al-Houthi could then issue a personal invitation to Yemen’s President Abdrabbo Mansour Hadi, former president of south Yemen Ali Nasser, Mohamed Ali Ahmed and Abderrahman al-Jafry as representatives of the southern Hirak movement, and Saied No’man, from the Socialist opposition party. A summit of the major regional leaders in Yemen would aim to create a new social contract in the country—one that could then be the basis of a new constitution, the details of which were partially worked out during long and laborious sessions of the national dialogue over the past two years.

The broader summit, featuring Iran’s and Saudi’s top diplomats, should discuss nothing less than a full regional agenda. The problems throughout the region have many common features: Terrorism, poor governance, and ethnic and religious mistrust. In Lebanon, common wisdom believed all local problems required an S-S agreement, meaning Saudi-Syrian entente. Given the collapse of the Syrian state, it is clear that a Saudi-Iranian (S-I) agreement would be much more to the point.

The GCC summit at Camp David is an opportunity for President Obama to put his philosophy of engagement to the test. Rather than simply bolstering the egos of Gulf leaders with promises of military support, this is the time to put them before a diplomatic challenge of the first order. If it works, it would revolutionize Middle East politics. If it fails, it would be back to business as usual as unrest spreads throughout the region.

In Syria, as in Yemen and on engagement as on democracy, the Obama philosophy is in need of action based on a clear strategy before it can rise to the level of doctrine. Lawrence Freedman writes, “The realm of strategy is one of bargaining and persuasion as well as threats and pressure … it is the art of creating power.” In the Middle East, President Obama has been strong on articulation, but he has yet to create an effective blend of soft and hard power. A clear strategy backed by US strength would see a marriage of word and deed to promote conflict resolution or, failing that, deter an adversary from causing harm to the region and to long-term US interests in it.

Image: The aircraft carrier USS Theodore Roosevelt (CVN 71) operates in the Arabian Sea conducting maritime security operations in this US Navy photo taken April 21, 2015. The Roosevelt and its escort ship the guided-missile cruiser USS Normandy (CG 60) will join seven other U.S. warships in the waters near Yemen. (Photo: Wikimedia)