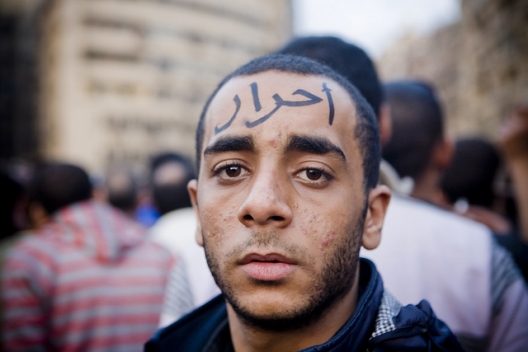 Today, all TV journalists working in Egypt know that tasreeh—a monthly-renewable permit issued by the interior ministry for accredited journalists to film on the streets—is back. In the wake of the January 25 Revolution, it had disappeared from the bureaucracy, but now police are once again preventing journalists from filming without permission. While some, myself included, have managed to talk their way out of the resulting problems as we discovered the reintroduced regulation this summer, others haven’t been so lucky. Footage filmed by a France24 team was erased by police while working on a story on subsidies in July.

The three-year moratorium on the permit, and other restrictions, allowed independent journalism to flourish. Young freelance reporters driven by a revolutionary spirit were able to work and establish themselves on the scene, away from the structure of bureaucratic requirements. Independent initiatives in the field stand as a testament to the positive transformation.

Unofficial restrictions, however, persisted and sometimes to dangerous ends. Citizens were encouraged to police the public space and question those they deemed ‘suspicious’ – an accusation often directed at camera-carrying journalists, who were assaulted and beaten on numerous occasions. The politically motivated incitement by the state also fueled citizen policing of their neighbors’ beliefs and ideas, with deadly repercussions on minorities. The resulting violence is one symptom of a vigorous debate over public space that has reverberated through various fields—culture, economy, politics, and more.

In July 2011, sociology professor Mona Abaza described a visible cultural transformation. “It is expressed in the blossoming and daring youth subcultures and artistic expressions, which Tahrir magically released. These have opened new visionary paths and dreams that will be difficult to suppress.” She said they converged towards new ways of “practicing democratic advocacy” and “remain dreaded and uncontrollable for authoritarianism.”

Now the state is reclaiming whatever space the public seized, reversing the benefits and outcomes that could arise through cultural and social empowerment. While citizens police the public space, the government is actively working on eliminating these spaces altogether to preserve the status quo. The repercussions however will far exceed the diluting of the political scene alone, as various aspects of public life are targeted.

A monthly music and arts festival that has become a Cairo fixture is now required to seek permission from the ministry of interior, in addition to the customary permit issued by the district authority. This led to the delay of the festival in August and its cancelation this month. Usually populated by young faces, the festival aims to “turn public spaces into spaces for free expression, knowledge and joy.” In a statement to the media, organizers of El-Fan Midan said they would hold the festival this Saturday even without the security permit. They dismissed the ministry’s reasoning in which it cited fears football fans and street vendors would take advantage of the large gathering.

Both are subject to security crackdowns. Downtown Cairo is now void of the vendors that occupied its streets over the past three years. Police and army vehicles and special forces now stand in the place of vendors, some of whom have been moved to another location.

“The problem is not in the security vacuum or the civilized appearance, but it is an unemployment crisis that was not addressed by the state. Citizens had to solve it personally by buying goods and trying to find outlets to sell in the public space. It’s a problem of a renewable battle over public space that has been eroding as demand by conflicting parties increases,” wrote politician Shahir George. He argued that laws need to be amended to find a just solution for the use of public space.

This battle isn’t limited to the physical space. The political overtones occasionally found in El-Fan Midan or the challenge to authority posed by vendors blocking traffic and operating outside the formal sector is an indicator of the changing human element. More organized efforts and developed ideas therefore pose a bigger threat and consequently expose their beholders to worse risks.

Egypt’s civil society is currently bracing for a crackdown. A government announcement calling on NGOs to register under the current, but long-ignored civil society law, led many activists in the rights field and advocacy groups to believe they will be targeted and prosecuted under the penal code. The September 2 deadline was extended, but the extension is likely nothing more than a reprieve. A new law, described by activists as the worst draft law presented in the past three years, is expected to pass with the election of a new parliament.

“Issuing this draft law in its current format has nothing to do with the government’s desire to ‘regulate’ this field, but to make rights and development organizations subject to the control of the executive agencies of the state, and specifically, security,” rights lawyer Ahmed Ezzat wrote. He argued that the new bill aims to silence groups calling the government out on its failures and rights violations or push them out of the scene all together.

As the government seeks to reassert control over a space dominated by religious parties, legislation went into force this summer bringing mosques back under government control. An official at the ministry of religious endowments said in July that the goal is to combat extremism, atheism and Shi’ism.

In its report on the regulations, the Egyptian Initiative for Personal Rights said that a review of these policies and their outcomes would reveal instead their counterproductive nature, fostering the idea that religion is the main source for political legitimacy instead of fighting political Islam. These efforts also created a crisis in social and religious plurality and kicked off a battle over the ownership of the supposedly unified religious discourse, the report said.

Government efforts also extend to subliminal targets. According to independent daily Al-Masry Al-Youm, the ministry of education agreed to infuse “ideological security” in curricula. “Ideological security guarantees the ideological, moral and theological immunization of teachers and is necessary for social stability,” the paper said quoting a study adopted by the ministry, giving no further details of what this means or how it would be implemented. On university campuses, all forms of political activity and expression are banned in a bid to rein in a volatile student movement.

It seems the government wants to control the development of ideas early on, in schools and in universities. Its view of unmonitored ideas as potential risk falls in line with other efforts to restrict public space and the activities that characterize it – the government views it all as a nuisance. Such misguided efforts will only lead to a brief reprieve for the government. The issuance of a repressive protest law last year was effective in curtailing street action but did nothing to address the anger that has fueled protests. Instead of demonstrating, some activists are resorting to new tools such hunger strikes while others are pursuing violence. With no public space or recourse, citizens will look for other venues, pushing the debate and the development of ideas underground.

Instead of trying to control the expression of frustration, the government is better off addressing these grievances. Instead of fighting it, it needs to invest in the social and cultural enrichment of its citizens.

The state is at a point where it needs the backing of the civil society in all its economic and social forms; without the help of NGOs in development work, almost a parallel system to the ailing government bureaucracy, there can hardly be any improvement. Stripping citizens of their role as stakeholders in their communities, where they see themselves as beneficiaries as well as contributors with the comfortable space to do so, will backfire on multiple fronts. Without a healthy and open public sphere that allows citizens to explore their options and their potential input, apathy will rule. Detachment from society along with simmering anger with no recourse to address and solve grievances boil over more often than not.

Sarah El Sirgany is a nonresident fellow at the Rafik Hariri Center for the Middle East. She is a Cairo-based journalist and television producer, contributing to regional and international publications and networks including CNN, the New York Times, Al-Monitor and Mada Masr.