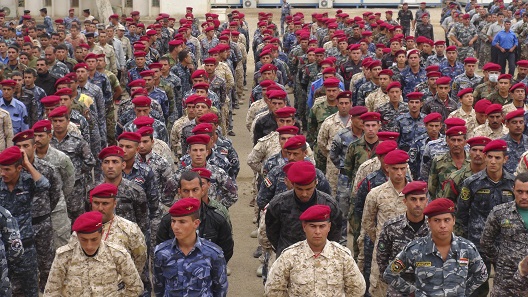 Iraqi Prime Minister Haider al-Abadi’s encouragement of a tribal revolution to fight the Islamic State (ISIS or ISIL), or the foreign enemy, seems to be a necessary reaction to the dire situation of the state army, struggling to maintain an effective force in the face of the jihadist threat. Abadi chose a familiar tactic from the Iraqi political playbook—one that was used in previous Iraqi administrations, including that of Saddam Hussein, to incorporate tribes into Iraqi national identity and politics.

During the 1990s, Iraq’s Ba’th regime faced declining political legitimacy due to the 1991 uprisings in the Kurdish north and Shia south country and exhausting wars with Iran and the West, which led to economic difficulties for the regime. These events forced Saddam to shift his socialistic secular Ba’thist approach, which had lost its resonance with the people. He adjusted to new economic and political realities by initiating his “Faith Campaign” (al-hamla al-‘imaniyya) aimed at strengthening his religious and tribal legitimacy. By putting on an Islamic mask, Saddam’s regime pushed for greater piety in Iraqi society and began to prioritize religious occasions, favoring Islamic policies in Iraq, and allowing trans-regional Islamic organizations to conduct meetings in Baghdad.

The Ba’th regime also adopted a policy aimed at resolving intertribal disputes and dominating intertribal dynamics. It accommodated tribal judicial practices and selectively armed tribes while incorporating important ones into the political machinery to ensure none would grow too strong. The Ba’th party labeled itself the “tribes of all the tribes.” The strategy also attempted to construct a new national Iraqi identity on top of the previous failed ones: the Hashemite identity, the nationalist, and the socialist. Instead, Saddam attempted to recreate an Arab pre-Islamic common denominator to unify Sunnis and Shias in Iraq under one patriotic banner by reawaken importance of tribal kinship and traditions—previously seen as remnants of the colonial past. Yet, the pro-tribal and Islamic strategies were for Saddam’s regime primarily a rhetorical tool to realize regime policies rather than an expression of sincere ideological or religious belief.

How does this fit into current Iraqi politics and encouragement of a tribal revolution and how is the approach to tribes different in post-Saddam Iraq?

In today’s Iraq, tribes have acted with more independence and openly challenged Nouri al-Maliki’s government. The strength and popular support of the Sunni tribes have forced the new Abadi government in Baghdad to accommodate tribal demands, which the Maliki government either neglected or failed to do. The Sunni tribes and the Shia-led government, however, share common cause in fighting ISIS. This cross-sectarian alliance has played out in tribes fighting together, with the army, and with Shia dominated popular forces. With the support of coalition airstrikes, Iraqi tribal-militia-military forces have made real progress, gradually capturing ISIS territory in northern Iraq and ultimately forcing ISIS into a defensive posture.

Yet, Abadi’s tribal revolution seems only geared to fighting extremism to protect Iraq. It remains unclear how the renewal of tribal identity will play out after defeating ISIS. What is clear though, is that the Iraqi tribes once again play a central role in the construction or imagination of an Iraqi identity, which has previously proven to be fragile and subject to change since the founding of the nation in 1921. In the post-Saddam Iraq, tribes are no longer easily coerced and now occupy a real military and political position. As such, two different scenarios could emerge after the defeat of ISIS:

The development of institutions in the rural areas and a policy of inclusion will bring the rural population out of poverty, alienation, and illiteracy and establish the foundations of a shared national identity. Rural citizens would feel part of a larger national project. To achieve this goal, the government must adopt a national school curriculum that carefully considers the inherent diversity in Iraqi society and work toward political reforms and economic development, expanding access to markets and developing the agricultural sector in the rural areas. Such policies could develop the national unity that would allow the Iraqi government to combat extremism and regain its monopoly on violence in the country.

It is necessary for Baghdad to differ from past experiences of coopting and excluding tribal elements and instead carefully consider their real power and future involvement in national and local politics. Without it, there is a real danger of tribal infighting and sectarian clashes in and around Baghdad. Such a scenario would weaken the already weak national sense of belonging and lead to increasing regionalism in Iraq, where tribal elements are only interested in maintaining local security and remain loyal to local leaders.

Jeppe Stavnsbo Sorensen is a research intern with the Atlantic Council’s Rafik Hariri Center for the Middle East.

Image: Sunni tribesmen take part in a military training, as they prepare to fight against militants of the Islamic State, on the outskirt of Ramadi, west of Baghdad, November 16, 2014. (REUTERS/Ali al-Mashhadani)