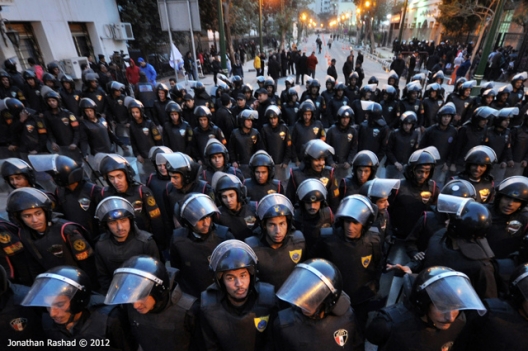 Amid speculation that newly elected President Abdel-Fatah al-Sisi would start his term by looking into the cases of dozens of political activists who have been in jail for months, either pending trial or serving sentences, for violating an unpopular Protest Law issued in November, a series of court orders issued this week ended such expectations, and increased fears that the worse might still yet to come.

Adding to the sense of dismay among several political parties, youth groups and human rights organizations was the fact that most of the jailed young men and women were known for support of the 25 January, 2011 Revolution that ended the 30-year rule of former President Hosni Mubarak. They had also stood up against the failed policies of former President and Muslim Brotherhood leader, Mohamed Morsi, which ended with his removal a year ago.

Pro-democracy activists apparently wanted to test the waters as soon as Sisi took the presidency to press for the release of their colleagues who were arrested over the past few months, and to amend the Protest Law that grants wide powers to the Interior Ministry and sets harsh penalties of up to five years imprisonment for violators. Hardly after gathering to stage a demonstration in front of the presidential Ittihadiya Palace on June 21, police, accompanied by thugs who were seen chasing away protesters with knives and rocks, cracked down on the small demonstration, arresting 23, including seven young women, among them a few known human rights activists, including Sanaa Seif and Yara Sallam

Early on Sunday morning, relatives and activists gathered in front of the Masr al-Gedida court in Heliopolis, hoping for their release pending trial, considering they were involved in a peaceful protest. Yet, they learned from lawyers that the trial had been suddenly moved to the Tora Police Academy, usually reserved for cases involving political Islamic groups and those involved in armed violence.

To the surprise of lawyers and families, the judge decided to adjourn the case until September 13 to “study requests made by the defense team.” This would leave the 23 young men and women in prison for nearly three months before their trial resumes. Lawyers said the only option left for them now is to present a request to the court to hold an earlier session, and renew their demand for the release of the defendants pending trial.

A day before, on June 28, a court in Alexandria adjourned the appeal of prominent lawyer and 25 January activist, Mahienour al-Masry, until July 20. She had already been in prison for over three months after she was convicted with violating the Protest Law and sentenced to two-year imprisonment and a fine of EGP 50,000 (almost $7,000).

Al-Masry was among a group of activists who staged a small peaceful demonstration earlier in December in front of a court house in Alexandria where two policemen were being tried for the brutal beating and killing of a young man in 2010, Khaled Saeed. His death was considered among many other reasons that triggered the January 25 Revolution, with Saeed becoming one of its icons. She was sentenced in February with eight other youth activists, but was not present in court. After her arrest on April 12, she appealed the sentence, and her lawyers were hoping she would be released pending trial.

A lawyer herself, Al-Masry is a member of the Revolutionary Socialists group, and only two days before her imprisonment was extended, she received a prestigious French human rights award that goes to lawyers defending human rights. The committee of the Ludovic Trarieux international human rights prize said on June 26, it had decided to honor Al-Masry in 2014 for her role in defending human rights in Egypt, and as a result being jailed under Mubarak, Morsi and Sisi. The same award was given to the late South African President Nelson Mandela while serving 27 years in jail.

Also on Sunday, a Cairo court announced it will start looking, on July 22, into the appeal made by 26 activists who were sentenced in absentia to 15 years imprisonment for taking part in an unauthorized protest and attacking a police officer a few days after the Protest Law was issued by former Prime Minister Hazem El-Beblawy in November. They include prominent blogger and activist, Alaa Abdel-Fatah who was arrested with two other defendants immediately after the sentence was issued on June 12 while trying to get into the court. The judge decided to hold an early session at 9 am, and when he came into the courtroom and found no lawyers or defendants, he sentenced all 26 to 15 years imprisonment in absentia. Alaa’s sister, Sanaa, is among activists who were arrested on June 21 in front of Ittihadiya Palace, and whose trial has been adjourned until September.

Most of the activists held over the past few months have opposed Sisi’s candidacy, and believe the army should not be involved in politics, nor should it remain a secretive entity that cannot be held accountable, even by elected bodies. They were also critical of stipulations in the 2014 constitution that allow the trial of civilians in front of military courts, and give the Supreme Council of the Armed Forces the right alone to name the defense minister for a transitional period of eight years.

The sentences and trials of these pro-democracy activists come at a time of debate among political parties and youth organizations on how useful street protests were in the first place, considering the ongoing daily violent demonstrations by Muslim Brotherhood supporters opposing Morsi’s removal, terrorist attacks against policemen, and Sisi’s insistence to maintain the Protest Law. While several official political parties said they would no longer support holding demonstrations at this stage, other youth groups believe that would be a setback to the gains made after the January 25 Revolution, and would not lead to the release of their colleagues.

Several political parties and movements, including Al-Dostour, the Popular Current led by former presidential candidate Hamdeen Sabbahi, the Popular Socialist Alliance, The Social Democratic Party, Al-Adl Party, Al-Karama Party and Egypt Freedom Party have announced they would hand over the presidency an amended Protest Law that would respect the right to assemble and hold peaceful demonstrations in accordance with the Constitution Egyptians approved in a referendum in January. They have also renewed their appeal to President Sisi to issue a pardon for activists who received final prison sentences according to the law.

Many analysts believe that Sisi will continue to support some sort of legislation that sets restrictions on public demonstrations, particularly in light of the renewed wave of terror attacks in Egypt and daily protests by Muslim Brotherhood supporters. However, Presidential Spokesman Ihab Badawi said, last week, that Sisi tasked the newly formed Legislative Reform Committee with reviewing the Protest Law, to ensure it is in line with the constitution. Political figures and commentators close to Sisi also note that they continue to receive indications that the newly elected president might be willing to pardon activists held for demonstrating without permit, but give no firm dates. Leaders of the political parties say they were hoping the president would consider the religious occasion of the beginning of the holy fasting month of Ramadan, and his own pledges during his election campaign, to reconsider the cases of jailed activists in order to open a new page at the beginning of his four-year term.