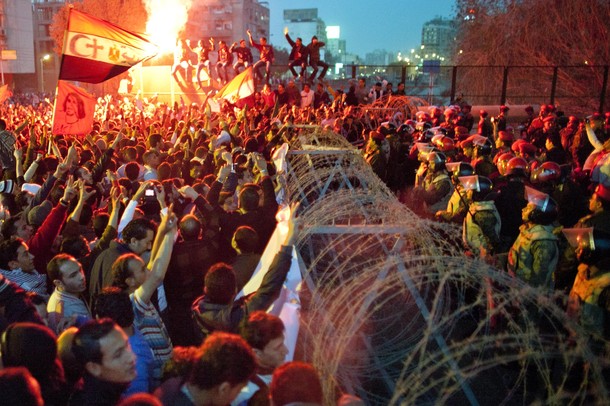 In the past two months, public appearances by members of the ruling Supreme Council of the Armed Forces (SCAF) have become increasingly rare, and they have grown accustomed to the insulting anti-military slogans emanating from persistent protests in public squares across the country.  This week, the revolutionary forces have decided to escalate their tactics by calling for a sweeping nationwide civil disobedience campaign on February 11. In preparation, they are beginning to decentralize protests from Tahrir Square and shift the focus to the Defense Ministry, where tens of thousands of protesters gathered on February 10 to demand an immediate end to military rule. These moves represent a strategic effort to increase pressure on the military leaders hiding behind their fortified walls on Friday from Tahrir Square to the location of the Ministry of Defense to further pressure the military leaders hiding behind the walls and resist the presence of armored vehicles that have been redeployed in the streets on the eve of the anniversary of Hosni Mubarak’s resignation.

The call for civil disobedience originated with youth movement but has since been adopted by student unions in most Egyptian universities.  The revolutionary forces have announced that the disobedience campaign and strikes will spread gradually, starting with employees of universities, then spreading to  workers unions, followed by the finance and transportation sectors.  The organizers of the campaign have not articulated a unified set of demands, however they generally reject presidential elections under military rule and demand removing article 25 from the Constitutional Declaration, which prevents challenges to the presidential election results.  They are also demanding clarification of the timeline for the presidential election following the SCAF’s announcement that the start of nominations would be moved up to March 10.

In the run-up to the campaign planned for February 11, Egyptian media commentators have begun to reference great historical precedents for successful civil disobedience movements, such as Ghandi’s campaign in India, the civil rights movements in the United States led by Martin Luther King and the anti-apartheid campaign led by Nelson Mandela. But unlike these historic analogies, calls for civil disobedience in Egypt currently lack the leadership needed to unify diverse interest groups and disparate demands.

Mohamed ElBaradei had the potential to assume such a role – and was nominated more than once by protesters in Tahrir Square to serve as their representative – but the former presidential candidate has disappointed his supporters every time by declining to lead them. He has chosen to prioritize his own safety over the demands of the street, initially announcing that he would only participate in protests marking the anniversary of the January 25 revolution if the security situation was sufficiently stable. Although ElBaradei’s concern for safety was not entirely unjustified, the anti-government protests that did materialize on January 25 were far less organized and widespread than activists on Twitter had hoped.

The lack of leadership among activists and protesters has damaging consequences for public safety and progress of the transition in general, as evidenced by the rage on display in the streets following the violence in the Port Said soccer stadium on February 2, which killed at least 76 fans, many of whom were supporters of the al-Ahly team. The next day, major demonstrations erupted all over the country – fueled by the popularity of the al-Ahly team – but the absence of leadership allowed the protests to devolve into chaos and anger. Out-of-control crowds attempted to storm the Interior Ministry, rapidly losing the respect and sympathy of the Egyptian people, whether or not they were provoked by “Beltagiyya” (thugs).

Those who participated in marches planned for February 10 and called for a nationwide civil disobedience campaign and general strike on the following day are convinced that the riot in Port Said was a deliberately orchestrated by the military to exact revenge on the “Ultras” (soccer fans) for their role in mobilizing anti-regime protests during the revolution. In this charged atmosphere of conspiracy theories, the Egyptian public is rapidly losing confidence in the SCAF’s ability to administer a free and fair presidential election. Contributing to concerns about the fairness of the upcoming presidential elections is the allegation of a pact between Islamists and the SCAF, reinforced by the former’s statements defending the military and accusing protesters of engaging in thuggery.

Another indication of the public’s growing distrust with the SCAF was the shockingly low turnout in the first stage of Shura Council elections last week, in which only 6.5 percent of eligible voters cast ballots – as compared to the 50 percent turnout rate recorded during the People’s Assembly elections. Although many voters undoubtedly chose to stay home because of the Shura Council’s reputation as a politicall weak body – lacking the power to pass legislation – dismissing these elections as a waste of time would be a fatal mistake.  Although the upper house of parliament may not have law-making authority, its composition will have profound implications for the selection of a 100-member parliament-appointed constituent assembly that will draft Egypt’s next constitution.  While Egyptians are already turning their attention to what will undoubtedly be a fiercely contested presidential race, the results of the parliamentary elections – still in progress – will have just as much bearing on the course of the transition and will define Egypt’s future legal framework.