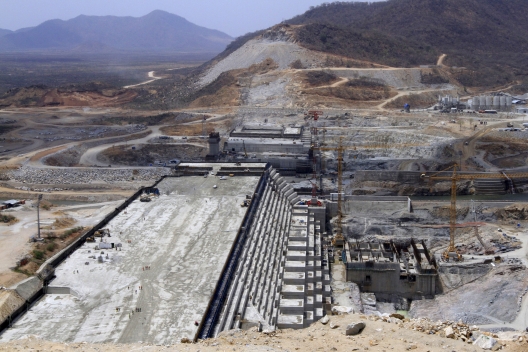 The end of 2015 saw the completion of a new round of negotiations between Egypt, Ethiopia, and Sudan over the Grand Ethiopian Renaissance Dam project (GERD), with all participating countries reaching an agreement on the technical studies to be completed on the dam. As Egypt, Ethiopia, and Sudan start a fresh round of talks, EgyptSource takes a look back at negotiations and what’s at stake for each country.

The 2015 talks concluded with the countries deciding on two French firms–BRL and Atelia—that will bid for a contract to study the dam’s impact on Egypt’s water share. The firms recently produced their offers for the technical studies for the participating countries’ review. The first study aims to determine the impact of the dam on water reaching Egypt and Sudan, while the second will evaluate its potential environmental impact.

Negotiations over the construction of the dam have been ongoing since 2011, fraught with tensions and delays, as the countries struggle to reach agreement over water allocation, supply, and rights to the Nile.

An Overview of the Issue

The nearly $5 billion, 6,000 Megawatt project is being constructed in Northwest Ethiopia along the Blue Nile, about 40km from the Sudanese border one of two major tributaries to the northward flowing Nile in Egypt. As of October 2015, the Ethiopian Electric Power Corporation (EEPCO), financed by Ethiopia and China, had constructed approximately 47 percent of the dam. The next phase is planned for  October 2016.

What’s at Stake for Each Party?

Egypt: A colonial-era treaty brokered by the British Empire afforded Egypt majority rights to the Nile and its tributaries by guaranteeing the country 48 billion cubic meters of Nile water. A 1959 agreement increased that amount to 55 million cubic meters (or 66 percent). In 2010, the Entebbe agreement between Uganda, Kenya, Tanzania, Ethiopia, and Rwanda invalidated the colonial era agreements, however the Egyptian government has steadfastly argued that it should retain its majority share ownership of the Nile.

To make its case, the government has relied on a clause in the 1959 agreement that states that all member countries of the Nile River Basin must ratify future agreements. Because Egypt has not ratified the Entebbe Agreement, the argument is that the agreement is invalid. While Egypt could seek to launch an international legal case for its claims to the river, the March Declaration, also known as the Declaration of Principles, signed by Egypt, Ethiopia, and Sudan in 2015, fails to specify the medium through which disputes can be resolved. In December, former Irrigation Minister Mohamed Nasr al-Din Allam advised that, should future negotiations fail, Egypt could organize a presidential meeting between the three countries to address grievances internally before taking the matter to the African Union or the United Nations Security Council.

In the most recent negotiations, Egypt, which relies on the Nile for over 90 percent of its water needs, demanded that the countries focus on finding a common solution to alleviate concerns over the dam’s operation and on the technical studies that will determine the dam’s impact on downstream water flow. Egypt remains concerned that the crop production of its nearly 40 million farmers will be negatively impacted, and also remains skeptical that it will reap any real benefit from the dam’s hydroelectric power, having already built the High Aswan Dam to supply electricity for portions of its population.

Ethiopia: Ethiopia views GERD as an opportunity to reevaluate Egypt’s claims of control of the Nile’s waters, allowing for the possibility of renegotiating old terms. Ethiopia is looking to expand its power source and take advantage of what will become the largest hydroelectric power plant in Africa to meet its energy needs. Ethiopia also sees the dam as a path through which to enhance sustainable development and reduce its carbon emissions while addressing the issues of food and water security for its rapidly growing population. In addition, Ethiopia is eager to quickly fill one of the spillway reservoirs within the dam in order to mitigate drought, increase agricultural production, and enhance flood management.

Construction workers erect rebars at a section of Ethiopia’s Grand Renaissance Dam, as it undergoes construction, during a media tour along the river Nile in Benishangul Gumuz Region, Guba Woreda, in Ethiopia March 31, 2015. (Tiksa Negeni/Reuters)

Ethiopia remains insistent that the dam will not negatively impact the downstream water share for Egypt and Sudan—claims Egypt has rejected.

Sudan: Like Egypt, Sudan fears that the dam could impact downstream water flow. It has voiced concerns that the project could threaten  its population’s main water source. In addition, Sudan has raised concerns in the past that its water supply could fall under Ethiopian control.

Sudanese Foreign Minister Ibrahim Ghandour said during a meeting in Cairo in early January that “Sudan’s interests are similar to Egypt’s and we will not allow anything to threaten both our and Egypt’s water security.” However, he also stressed that Sudan will not be an intermediary between Egypt and Ethiopia in the negotiating process. Ghandour added that Sudan does not view the construction as a threat to the safety of Sudan’s people.

A number of Egyptian public officials have been involved in the negotiations in various capacities since 2011. Here is what current key players in the talks have said about the dam and its impact:

President Abdel Fattah al-Sisi: Sisi has taken a more conciliatory approach to the negotiating process than his predecessor, Mohamed Morsi, who said in 2013 that “all options are open” in addressing threats to Egypt’s water security. Egypt, Morsi said, was not calling for war, but added, “If [the Nile] diminishes by one drop then our blood is the alternative.” In a meeting with Morsi, political leaders were caught on camera proposing a range of hostile actions Egypt could take against Ethiopia in retaliation for beginning construction on the dam.

Sisi, who resumed negotiations with Ethiopia after his election, has remained insistent that the talks be held in good faith and that Ethiopia redresses Egypt’s concerns openly and fairly. He has made it clear that he wants to ensure that Egypt’s water flow levels are not negatively impacted by the dam’s construction.

In May 2014, Sisi addressed the Egyptian public’s concerns about the dam and its impact on Egypt’s water supply, noting that  “water is a matter of life and death.” Striking a conciliatory tone toward Ethiopia, Sisi stated, “We should admit that we haven’t given enough effort to all our African brothers and Ethiopia…Negotiations and mutual understanding are key to cooperation and solving all these issues.” Sisi has also worked to publicly promote positive relations with Ethiopia, stressing the importance of enhancing social and economic cooperation between the two countries.

Foreign Affairs Minister Sameh Shoukry: While working to ensure the continuation of negotiations over the technical aspects of the dam, Shoukry has remained steadfast in his insistence that Egypt will not cede its claims to the Nile and its water security to any outside power. He recently stated all Egyptians “should be assured of the ability of Egypt and its negotiators to protect its water interests.”

Prime Minister Sherif Ismail: Ismail has highlighted three main issues of contention for Egypt regarding the GERD’s construction: securing Egypt’s claim to its share of Nile water; ensuring that the dam is not used for political purposes; and making certain that Egypt can benefit from the dam to bolster its own development.

Minister of Irrigation Hossam al-Moghazi: Moghazi recently said that Egypt will prepare a technical study on the dam’s current sluices, or gates, in response to Ethiopia’s rejection that further sluices be built. He said that the results of the study will determine Egypt’s final decision on the number of sluices it hopes to negotiate. According to Moghazi, Egypt also intends to conduct its own technical study to determine its position on the number of spillways needed to guarantee the flow of water downstream.

Image: Photo: A general view of Ethiopia's Grand Renaissance Dam, as it undergoes construction, is seen during a media tour along the river Nile in Benishangul Gumuz Region, Guba Woreda, in Ethiopia March 31, 2015. (Tiksa Negeri/Reuters)