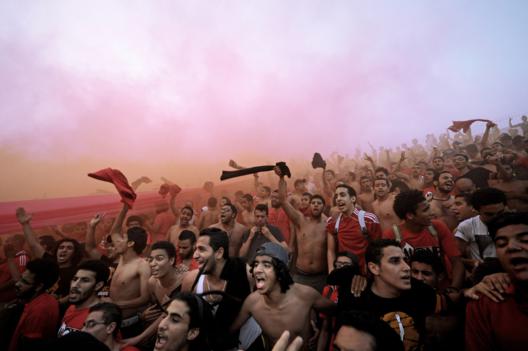 On February 1 2012, the Port Said stadium witnessed one of the biggest catastrophes in Egypt’s recent history, in a match between Cairo’s al-Ahly club and Port Said’s al-Masry club. Under the auspices of the police, seventy-two football fans from al-Ahly’s biggest fan club ‘Ultras Ahlawy’ were slaughtered in the stadium by football fans from Port Said city, and what is believed to have been paid thugs.

Contrary to protocol, police did not search al-Masry fans, who wielded knives, swords, stones, and fireworks. As clashes broke out towards the end of the match, the police did not intervene. Instead, they withdrew from the stadium, welded the doors, and turned off the stadium lights. In the meantime, Ultras Ahlawy were being chased, stabbed, choked, and thrown off the grandstands.

“It was a nightmare. I had to cover myself in my friend’s blood to escape the thugs who were chasing me,” said Ahmad Sabry, who witnessed the death of his childhood friend.

Most of the fans killed in the stadium were between the age of thirteen and twenty. The massacre took place within a twenty-minute frenzy.

This massacre happened against the backdrop of an ongoing vendetta between the police and Ultras Ahlawy, which has manifested itself in repeated clashes since the group’s inception in 2007. Many believe that the police orchestrated this massacre to retaliate for the humiliation suffered at the hands of the Ultras, who fiercely fought off the police during the 2011 Egyptian revolution.

19 June 2013. Mother of slain football fan Amr Ahmed, popularly known as ‘Steef’, cries as she holds a portrait of her son. Steef, 26, was an accountant and one of the founders of Ultras Ahlawy. “My son had the chance to leave the stadium, but stayed trying to save his friends,” said his mother. According to forensics, Steef died due to a rib-cage fracture.

20 June 2013. Parents of slain football fan Mohamed Abdallah hold his portrait in his room. Abdalla, 21, was an engineering student and was supposed to get married in 2013 to his childhood friend following a five-year engagement. “I sold everthing to buy a him an apartment for his marriage, but now he’s gone,” said his mother.

6 May 2013. Port Said, Egypt. A mural reflecting resentment against the police amongst football fans.

27 June 2013. Father of slain football fan Ahmed Zakariya, popularily known as ‘Ziko’, holds a portrait of his son. Ziko, 16, was a highschool student and an old member of Ultras Ahlawy. “I will never back down until all of those responsible for my son’s death are held accountable,” said his father. Ziko died after being hit on the head with a metal rod.

26 June 2013. Portrait of slain football fan Mohamed Khaled, who died at the age of 15. Khaled was one of the youngest victims in the stadium massacre. He was fatally struck on the head with a metal rod. “He didn’t tell me that he was going to the match that day, as he knew I would refuse. I wish had the chance to hug him before he left,” said his mother.

7 May 2013. Graffiti in Port Said, Egypt showing one of the 21 defendants sentenced to death for their alleged role in the massacre. Many of them are believed to have been arrested randomly.

26 June 2013. Portrait of slain football fan Osama Mostafa, who died at the age of 18 in the stadium massacre. Mostafa was a Computer Science student and a member of Ultras Ahlawy.

20 June 2013. Family of slain football fan Mosatafa Metwally, who died at the age of 17. Metwally was a highschool student and an influential person in Ultras Ahlawy,  despite his young age.

19 June 2013. Mother of slain football fan Mohamed Gamal, popularly known as ‘Jimmy’, who died at the age of 15. Jimmy was a member of Ultras Ahlawy and one of the youngest victims in the stadium massacre. “I miss your simle,” said his mother.

28 June 2013. Graffiti outside al-Ahly club headquarters in Cairo, Egypt showing the number of football fans killed in the stadium massacre and the ensuing violence. As these deaths threw the political landscape in turmoil, families continue in agony to mourn the loss of 74 sons.

28 June 2013. Widowed wife and daughter of Youssef Hamada in the Cairo suburbs of Matariya. Hamada initially managed to escape the attack, but turned back after hearing his comrades scream for help from behind the welded gates. When they broke open, he was crushed under the gates. “The only reason l’m still living is my daughter Gana. She’s Youssef’s flesh and blood,” said his wife.