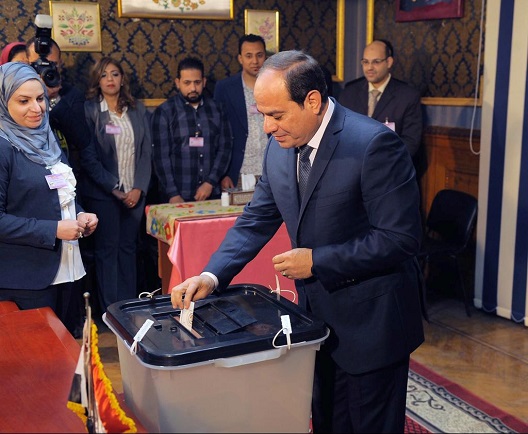 Egyptians are going to the polls to vote in a presidential election for the third time since the uprisings of 2011. The act of voting for a president who could, ostensibly, be voted out was a novelty. Hosni Mubarak served five six-year terms before stepping down in February of 2011, and Egyptians were keen on taking advantage of their new rights. This election, however, is likely to see a low turnout at the polls.

The first reason is that it is viewed by many in Egypt as a referendum rather than an election. There are two candidates: the incumbent, President Abdel Fattah El-Sisi and the head of the centrist Ghad party, Moussa Mostafa Moussa. Moussa scrambled to present his papers, finishing just minutes before the deadline for nominations had expired. Moussa’s credentials as a serious candidate are not particularly burnished given that, at the time of his nomination, his Facebook page declared his support for Sisi’s candidacy.

There had been other candidates. Two of them, both military men, were arrested for contravening army rules; Egyptian officers cannot retire from the army, they must be released. The army maintained that neither Ahmed Konsowa nor Samy Anan ever obtained such a release. Three other candidates dropped out. Ahmed Shafik was escorted from the airport on arrival from the UAE, spent some time at a luxury hotel in Cairo and then said he’d reconsidered. Khalid Ali and Anwar al-Sadat cited a lack of a level playing field before withdrawing their candidacy. Moussa is likely to stand no chance at all.

Notwithstanding the very real issues that Egypt faces—an economy still struggling to its feet in the wake of the tumultuous post-uprising years, declining political and civic freedoms and a looming security threat—Mr. Sisi still has a very significant following. However, it is unlikely that any but his most ardent fans will head for the polls. This reluctance is not out of any deep-seated political resentment, although it certainly exists for some. The majority of Egyptians are weighted down with other concerns, chief among them the economy. That’s significant since Mr. Sisi’s electoral platform four years ago rested on two factors, the economy and security. And while security is a prevalent concern for almost all Egyptians, it’s the ability to put food on the table that takes precedence for the vast majority. So for most voters, the question is, has he delivered?

Mindful of Egypt’s teetering economy, the government, under Mr. Sisi, resorted to what Egyptians have traditionally viewed as the very last resort—it cut a deal with the IMF. The deal was in the form of a $12 billion loan, approved in November 2016 and the resulting economic reforms were largely unprecedented. They started with energy subsidies being further slashed (serious energy subsidies were first cut in June 2014) and peaked with the flotation of the Egyptian Pound in November of last year. For Egyptians, the effects were immediate and, for many, crippling. The currency all but halved its value against the dollar, leading to steep price increases on almost everything, sky rocketing inflation, which peaked at 35 percent in July of 2017, and pushing interest rates to over 18.5 percent.

It was an extremely risky political move. Traditionally, Egyptian governments have balanced serious reform against domestic popularity, generally to the detriment of the economy. It was a measure of both Mr. Sisi’s political resolve and his popular support—there were few demonstrations against the initial cuts and since then, Egyptians have mostly grimly tightened their belts and struggled on.

The risks have begun to pay off. Egypt’s economy is on the mend. The macroeconomic indicators are rising; the inflation rate has shrunk from its peak of 35 percent in July 2017 to 14 percent, and it is expected to fall to 12 percent during this year. Egypt’s GDP is showing remarkable improvement and is expected to register 4.8 percent growth in July, up from 3.5 percent in the previous year. In a show of creeping interest, international investors bought $20 billion in Treasury bills, pushing the foreign reserves (the nominal sign of Egypt’s financial health) up to $42.5 billion; from an anemic $19 billion pre-IMF deal.

The country has worked hard to attract FDI: A new investment law—No. 72 of 2017—went into effect on 1 June 2017, aiming to promote foreign investments by offering further incentives, reducing bureaucracy, and simplifying and enhancing processes.

The IMF has given Egypt a thumbs-up. Its latest report  noted that growth will gain momentum in 2017-18, driven by factors including a recovery in consumption and private investment. It projects growth of around 6 percent in the medium term.

Egypt had an annual financing gap of around $10 billion. Currently, according to the report, “the financing gap for the next 12 months is about $3 billion after fund disbursements, and is expected to be met with bilateral, gross reserves, and commercial financing.”

While all this is undoubted progress, it has yet to filter down to Egypt’s citizens, the majority of whom are struggling to provide their families with the basic necessities. The government has labored to protect the most vulnerable with programs ranging from the smart card program, designed to ensure that subsidies go to the most needy, to the most recent attempts to provide affordable life insurance for the poor. These are excellent starts, but much remains to be done.

While unemployment has fallen 11.3 percent in the final quarter of 2017, from 12.4 percent the year before, it’s still high. More importantly, youth and, more specifically, those with higher education degrees and women, made up a disproportionately higher percentage of those unemployed. If Sisi’s first presidential term dealt with setting foundations for economic reform, the second must forge ahead with tackling unemployment by encouraging entrepreneurship, refining and increasing vocational training, and ensuring access for women to the job market. Egyptians might not be flocking to the polls to vote in the presidential elections, but that does not mean that they aren’t judging the president.

Mirette F. Mabrouk is the senior fellow and director of the Egypt Program in the Rafik Hariri Center for the Middle East.