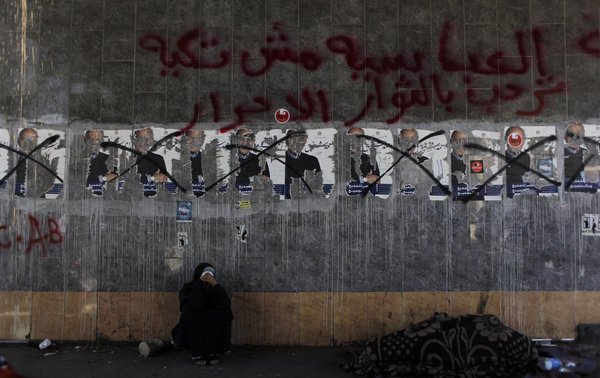 A few days before Egypt’s first presidential election since the January 25 revolution, Egyptian voters are feeling tremendous confusion toward the eleven candidates vying to succeed former president Hosni Mubarak, overthrown by the popular uprising fifteen months ago. But activists and observers here in Cairo fear that this election will restore the former regime to power if voters choose so-called “filul” candidates – remnants of the Mubarak regime. The atmosphere here is frenzied and heated, reflecting the fact that the presidential race is seen as the final battle for revolutionary forces, a fight pitting revolutionary candidates against counter-revolutionary candidates. This battle has been instigated by the miserable performance of Islamists in parliament over the past three months and the ensuing violence.

A few days before the election, the candidates Abdullah Ashaal and Mohamed Fauzi Eissa withdrew from the race, reducing the pool to eleven candidates – among them five serious contenders and six trailing from behind. The field of contenders is divided between a camp representing the old regime or counter-revolution, as perceived by the public – including former Ahmed Shafiq (former Prime Minister during the revolution), Amr Moussa (former Foreign minister and who left the Mubarak regime ten years before its dissolution) – and another camp representing the revolution,  Abdel Moneim Aboul Fotouh (a former Muslim Brotherhood leader now separated from the group), who has presented himself as a symbol of “national unity” after winning the support of liberals, the Salafis, certain Christian groups.

The other liberal and revolutionary candidates are trailing behind Aboul Fotouh. Hamdeen Sabahi, a prominent leftist figure, is very popular with the Egyptian street as a result of his bold opposition to the former President Anwar Sadat with Aboul Fotouh in a famous debate three decades ago. Khaled Ali, a left-wing human rights activist barely meeting the 40-year-old age requirement for presidential candidates, has been endorsed by a number of revolutionary activists, but has little hope of reaching average Egyptians.

The third camp is represented by Mohamed Morsi, who was the Muslim Brotherhood’s back-up candidate until the disqualification of Khairat al-Shater. But in the streets of Cairo, where I am writing, and in the villages of rural Egypt, where I attended campaign events and conferences held by several candidates, there is a growing sense of disillusionment and rejection of the Islamist candidates, as a result of their unsatisfactory performance in Parliament.

In my opinion, if the presidential elections were being held a year from now, the nature of the competition would be entirely different, and the contest would be solely between the Islamist and revolutionary candidates. Under these circumstances, voters would likely reject candidates affiliated with the counter-revolution or the so-called “filul,” meaning remnants of the former regime. Many believe the ruling Supreme Council of the Armed Forces (SCAF) has tried to postpone the presidential election in order to prevent this unfavorable scenario.

In my interactions with voters, I see Egyptians as falling into three main categories: 1) those who support the revolution or the Islamist current and whose views cannot be changed; 2) a smaller group affiliated with the former regime, who are equally steadfast in their beliefs; and 3) the most important group – those confused voters who have not yet made up their minds, and who determined the parliamentary elections in favor of the Islamists led by the Brotherhood’s Freedom and Justice Party (FJP) and Salafi Nour Party. But as undecided voters are exposed to different influences and variables, they could withdraw their support from revolutionary or Islamist trends. This shift would decrease the gap between revolutionary and counter-revolutionary candidates.

The competition between revolutionary and counter-revolutionary candidates can be traced back fifteen months to the start of the revolution. Over the past fifteen months, Egyptian voters have seen a frightening deterioration of security, scoring casualties and injuries, growing panic, a rise in the price of public transportation due to the fuel and gasoline crisis.

Furthermore, they are becoming disullisioned with the weak and unsatisfactory performance of the Parliament, in which Islamists hold 70 percent of the seats, and which has yet to achieve a single aspiration of voters. Moreover, the interests of business owners and citizens have been severely damaged as a result of the demonstrations and clashes that occurred outsideof Maspero (state television headquarters) last year, in which Christians were killed. More recent outbreaks of violence in Abassiya, where supporters of the disqualified Salafi presidential candidate Hazem Saleh Abu Ismail were killed, and also in Tahrir Square, where battles raged around the Cabinet headquarters and Interior Ministry building, have discredited the revolution in the eyes of Egyptian voters, who are now desperate to find an exit to the cycle of violence, even if it means bringing back the Mubarak regime and not just its symbols.

Many Egyptians argue that the revolution has not improved their living conditions, but has only increased their misery in light of deteriorating security conditions and protests that no longer satisfy them, the anger against mass protests and demonstrations rose more and more after the killing of a soldier by gunfire in the clashes at Abbasiya. State media repots that the army discovered weapons among the protesters, this instability, chaos and insecurity situation has made many voters  inclined to choose a candidate capable of restoring security and order in the Egyptian street, rather than the candidates associated with the revolution.

The Parliament’s disappointing performance does not bode well for Islamists, who have failed to present solutions to problems of unemployment, low salaries, and inflation. In my conversations with Egyptians in the Delta region who voted in large numbers for the Brotherhood in the parliamentary elections, the perception that the Muslim Brotherhood aspires to control and monopolize all state authorities and institutions is now causing many voters to turn away from the Brotherhood’s candidate Mohamed Morsi.

This trend is also pushing voters toward Shafiq and Moussa. The latter enjoys considerable support in the Egyptian street because of his strong stance against Israel during his tenure as Foreign Minister.  Many believe that the SCAF is keeping Shafiq in the race despite his initial disqualification by the Supreme Presidential Electoral Commission (SPEC) to galvanize activists against Shafiq, and them more willing to accept Moussa as an alternative. But many activists here are fighting them both equally, and they believe that Moussa is only marginally better than Shafiq.

In summary, the January uprising has plunged revolutionary forces into a final battle against the former regime, and it is a battle of survival that will determine the fate of the nation. But the war is not only against candidates of the former regime but also against stereotypes that control undecided voters’ perceptions of the revolution and Islamists, which pushed them to vote in favor of former regime candidates although only fifteen months have passed since the revolution.