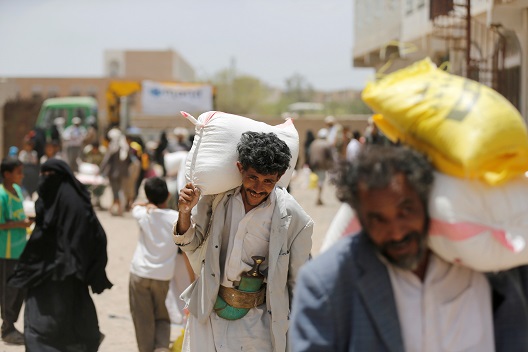 An international fundraising conference for Yemen took place at the United Nations (UN) offices Geneva in early April. Co-chaired by Sweden, Switzerland, and the UN, the conference succeeded in securing humanitarian funding worth over $2 billion, doubling the previous year’s pledges of $1.1 billion. Despite optimism that the donations represent a “success of international solidarity to the people of Yemen,” as stated by UN Secretary-General António Guterres in his closing statement, the current humanitarian response presents more problems than solutions.

Guterres himself acknowledged the shortcomings of humanitarian assistance absent the “respect of international humanitarian law” and “a serious political process to lead to a political solution.”

Two of the leading international parties in the conflict—Saudi Arabia and the United Arab Emirates—are among Yemen’s top humanitarian donors; together pledging roughly $1 billion, this year alone. Major allies of the Saudi-led coalition—the UK and the US—also made large donations this year of $237 million and $87 million respectively.

The US armed forces, meanwhile, provides assistance to the Saudi-led coalition, including aerial targeting assistance, intelligence sharing, and mid-flight aerial refueling. Perhaps most devastating is the naval blockade, resulting in major food shortages in Yemen, supported in part by the US navy, which halted and searched vessels suspected of carrying Iranian arms to the Houthis.  The State Department also recently announced a $1 billion arms deal with Saudi Arabia.

A year prior to the deal, a study by the American Bar Association’s Center for Human Rights found that US arms sales to Saudi Arabia violate the Arms Export Control Act and the Foreign Assistance Act, and legislative efforts to end US support for the Saudi-led coalition are ongoing.

In the UK, some estimates place arms sales to Saudi Arabia since 2015 at $6.4 billion—a 500 percent increase since the start of the conflict–and the Saudi and UK governments admitted to the use of British-supplied cluster munitions in the conflict.

Other UN member states donating to Yemen’s humanitarian assistance fund—including Switzerland and Sweden—are also top arms providers to the Saudi-led coalition, and together with the UK are in violation of the UN’s Arms Trade Treaty.

There is an innate conflict of interest in selling the weapons that perpetuate the suffering of Yemen’s civilian population while also sending humanitarian assistance and funding. And absent a political will to end the conflict, efforts by donor countries to support the people of Yemen, including humanitarian actions, are compromised.

Earlier this year, the Saudi-led coalition barred relief operations from reaching Houthi-controlled areas of Yemen. In 2015, Saudi Arabia pledged to cover a UN donation request of $274 million to fund its humanitarian efforts. Despite this show of goodwill, Saudi Arabia delayed the donation through five months of negotiations, during which it reportedly tried to coordinate its relief efforts through a government-run charity as well as trying to bar the donation of goods to Houthi-controlled areas.

Yemen’s 2018 pledges are no exception, with only just under 10 percent of the required amount collected. Previous international conferences, held under the auspices of the Friends of Yemen—a group of 39 countries, co-chaired by the United Kingdom, Saudi Arabia, and Yemen—pledged billions in 2013 and more since then, but have yet to meet any of its goals.

Yemen is among over twenty other countries in need of a humanitarian response, with the United Nations describing it in 2017 as the largest humanitarian crisis at the time. The amount of money required to address Yemen’s crisis is second only to Syria. The process for executing plans is a long and bureaucratic process involving dozens of humanitarian agencies in preparing a response plan—based on humanitarian needs and best practices and tools—and tend to take so long as to be ineffective in the rapidly changing conflict.

The most crucial humanitarian policy is to lift all restrictions—imposed by Saudi Arabia, the UAE, and the Houthis—and provide access for the delivery of humanitarian aid across Yemen.

According to a recent Human Rights Watch report, restrictions on humanitarian supplies and commercial imports imposed by both Saudi-led coalition and the Houthis have deepened the humanitarian catastrophe.

The Saudi-led coalition destroyed a bridge connecting the Hodeidah city port to the capital of Sana’a, which is under Houthi control. That bridge was used to carry 90 percent of the food supplies gathered by the UN. Human Rights Watch (HRW) who also documented dozens of Saudi-led coalition attacks targeting Yemen’s economic infrastructure—including factories, warehouses, power plants, and other economic sites—contributing to the scarcity of goods.

Houthis forces have deployed sea mines in the Red Sea, which could impede access to humanitarian assistance through Red Sea ports–and could remain a threat for up to ten years.

Lifting restrictions on the delivery of humanitarian assistance can only happen if the international community places political pressure; for instance, in the form of a resolution from the UN Security Council, calling on both the Saudi-led coalition and the Houthis to lift their respective blockades.

Yemen’s complex humanitarian crisis is taking place in “a state that has all but ceased to exist after three years of conflict,” a recent UN report warned. Developing a humanitarian policy in a state with little to no infrastructure left is difficult.

As crucial as it is to intervene and alleviate human suffering in the country, the question remains whether these international fundraising events for Yemen are putting the cart before the horse. Ending the conflict, starting with cutting off arms deliveries, must precede fundraising events. As long as the war drags on and food is used as a weapon of war, attempts to fundraise are futile.