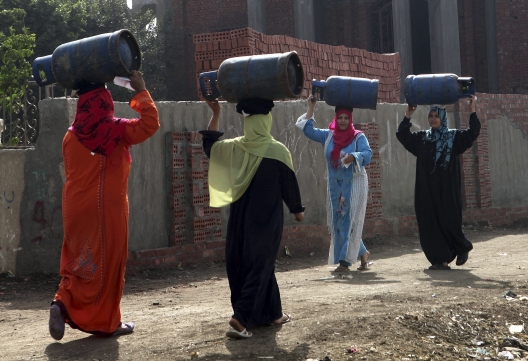 Photo: Women carry gas cylinders to be refilled on the outskirts of Cairo, April 1, 2013. (Reuters/Asmaa Waguih)

The government’s budget may see some much needed relief in the near future as oil prices on the international market have fallen precipitously. The decline coincides with President Abdel Fattah al-Sisi’s attempts to unwind crippling energy subsidies that have driven up government deficits and debt, drained foreign currency reserves, and strained relationships with international oil and gas companies.

For decades now, Egyptians have lived with subsidized fuel and electricity costs far below international prices. Fear of public backlash coupled with a net surplus in domestic petroleum production held pre- and post-revolutionary governments in check, with symbolic reforms alone enacted. Over the last half decade however, this negligence has begun to catch up with Egypt. According to the Minister of Petroleum Sherif Ismail, in an address to a US business mission this past November, subsidies in fiscal year 2013/14 reached a dizzying 128 billion Egyptian pounds ($18.4 billion), up from 63 billion Egyptian pounds($10.5 billion) in fiscal year 2009/10 before the revolution. Putting this in perspective Ismail notes, the 2013/14 energy subsidy bill reached 7 percent of GDP and accounted for 22 percent of the government’s budget.

The first step towards serious subsidy reform came in July. Sisi implemented across-the-board fuel price increases, with gasoline prices increasing on average 42 percent. The government also announced its intentions to remove electricity subsidies over the coming five years. Initial data reflecting the impact of the subsidy cut was released in mid-November, showing a promising 29 percent year-on-year drop in the subsidy bill in the first quarter of fiscal year 2014/15 (i.e. July –September), lowering subsidies to 22 billion Egyptian pounds ($3.08 billion). The decrease was also affected by fuel rationing and steep cuts to energy intensive industry, while a drop in global crude oil prices also played a part, which were down 7.6 percent on average compared to the same quarter a year prior.

Pinning down an exact number in future savings considering the unpredictability of oil markets and the variations in price of oil products, among other variables, is a difficult, if not impossible task. However, Egyptian brokerage firm, Pharos Holding, recently issued an equity strategy note, which provides a ballpark figure that is summarized here. In 2013, Egypt consumed 276.3 million of barrels of crude oil, while producing 260.6 million barrels according to BP’s 2014 Statistical Review of World Energy. This production, however, is divided roughly equally between international oil companies and use for domestic consumption (depending on the production sharing agreement between Egypt and oil companies). Therefore Egypt is entitled to 130.3 million barrels (i.e. half of the total produced), leaving 146 million barrels left to import. At an average price for crude of $108.56 in 2013, Egypt’s crude oil import bill amounts to $15.9 billion. As of mid December Brent crude is down roughly 45 percent from the 2013 average, to roughly $61. If crude were to maintain at this level through 2015, Egypt’s new import bill (assuming consumption stays constant) would plummet to $8.8 billion, creating a savings of $7.1 billion (EGP 50.7 billion). To put that in perspective, that savings represents 40 percent of the FY 2013/14 subsidy bill or 45 percent of the current level of foreign currency reserves. In other words, massive savings.

This slump in oil prices affords Sisi a number of domestic economic and political advantages. Namely, the significant drop in crude prices not only reduces the enormous burden of Egypt’s energy subsidies on the government budget, but does so without any of the civil unrest and deleterious economic effects normally associated with such austerity measures. This allows future subsidy cuts to be enacted more gradually. The subsidy cuts in the beginning of July 2014 resulted in few disturbances, coming shortly after Sisi’s election and inauguration, when he was arguably at the peak of his popularity.  If future subsidy cuts are too severe, they are unlikely to enjoy a similar reception. Instead, future fuel price increases caused by further subsidy cuts could trigger popular unrest, something to which modern Egyptian history is no stranger. In addition to straining the finances of ordinary Egyptians, subsidy cuts could also snuff out a burgeoning economic recovery. Looking across the Mediterranean, Europe is rife with examples of austerity-induced stagnation.

Through closing the budget deficit by reducing spending on petroleum and strengthening economic growth, Sisi can further improve Egypt’s credit rating, boost investor confidence, shore up the value of the pound through healthier current reserves, while also having the potential to improving the government’s tenuous relationship with the international oil companies, to whom it still owes $4.9 billion.  The end all affect is a strengthening of Sisi’s hand domestically, as he can portray himself as the savoir of Egypt’s economy without ever having to face the public backlash that comes with dramatic fuel price increases.