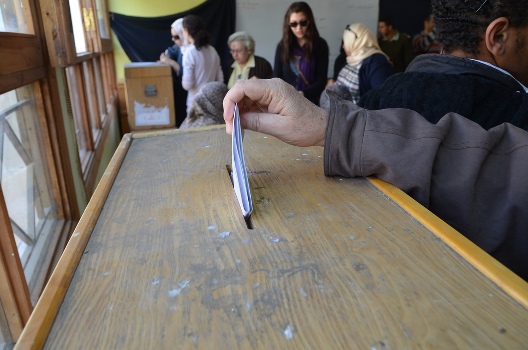 With voting in Egypt’s second presidential elections in two years expected to take place on May 26 and 27, EgyptSource will be providing periodic updates on the latest news coming out of the Egyptian elections process.

Saturday May 3 marked the official start to the presidential campaigning period, which is scheduled to last to May 23. It will be followed by a two-day campaigning blackout period before voting begins on May 26.

On the first day of campaigning, former army chief Abdel Fattah al-Sisi met with members of the media. During the meeting, he said, “The role of the media in the current phase is a critical one; they [the media] are capable of uniting Egyptians after the massive polarisation that took place in society.”

On May 5, CBC and ONTV aired the first television interview with Sisi.

The pre-recorded interview is being aired in two segments, with the second segment expected today.

His presidential candidacy and the army: In response to a question on whether he was the “candidate of hte armed forces,” Sisi said: “I will not tolerate your usage of the word a’askar [military] again.” He said “the armed forces have never ruled Egypt.” He also said that he decided to run for president when he detected an effort to “destroy the state,” forcing him to heed the calls of the people. He said he made the official announcement of his candidacy in uniform as a tribute and to thank the army. Speaking about the army in the context of his possible election, he said, “The army will not be involved in politics but will continue to help in economic developmental projects.”

He claimed Brotherhood leader Khairat al-Shater threatened that “fighters from Libya, Syria and Afghanistan will enter the country if anything happens to Islamist president Mohamed Morsi.” Shater’s family denied the claims.

Protests: Sisi expressed support for the protest law and skirted a question on whether he would heed calls to pardon January 25 activists jailed for breaking the law. He said, “We will make that call when we cross that bridge.” He also said, “The right to protest is guaranteed for all, but we will not let the country be destroyed.”

Gamal Abdel Nasser: “I wish I was like Nasser. Nasser was not just a portrait on walls for Egyptians but a photo and voice carved in their hearts.”

Security: If he is president, the army will increase its support of the police in fighting “terrorism.”  Sisi said “he would take whatever decision needed to protect the country from terrorism,” when asked if he would pass an anti-terrorism law.

Electoral platform: “I will focus on security, stability and development, encompassing education, health and food security.”

Political opposition: El-Sisi said that the concept of opposition offence was wrong and “should be corrected” through him being a role model as well as through interaction and communication. He said that the state should contribute in “correcting” people’s ethics through using mechanisms such as the media, the family and religious institutions. “It will take time, but we should start,” he said, adding that the president has a “coordination role” to play in this process.

Read reactions to the interview on social media here.

Leftist candidate Hamdeen Sabbahi launched his campaign in Upper Egypt’s Assiut, and the main elements of his electoral platform have included social justice, the public sector, the protest law, corruption, and the rights of martyrs’ families. He also invited Sisi to take part in a public debate.

In his first televised address to the nation on May 4, he vowed to scrap the controversial protest law, and replace it with a law that organizes protests.

His focus during the speech included a “war on poverty,” and eradicating terrorism through social justice. “We have toppled two heads [of state] yet the same policies [we revolted against] remain. We have made dear sacrifices, yet we still fail to get the good life we deserve,” he said.

Protest law: “I will put a stop to the working with the protest law, and will re-issue a law that regulates and does not ban peaceful protesting.” He promised to pardon “opinion detainees.”

Egypt and its African Neighbors: “I will call for the establishment of a regional entity for Nile Basin states; there will no room for rivalry between the Nile Basin countries.”

Electoral platform: “We must agree to fight poverty and work on providing real job opportunities.”

“Together we’ll build an active state in the modern world … a state that will be part of the principles of human rights and respect its duties in defending the rights of its Arab world and the rights of the Arab Palestinian people.”

Watch the full speech below:

Not supporting any candidate