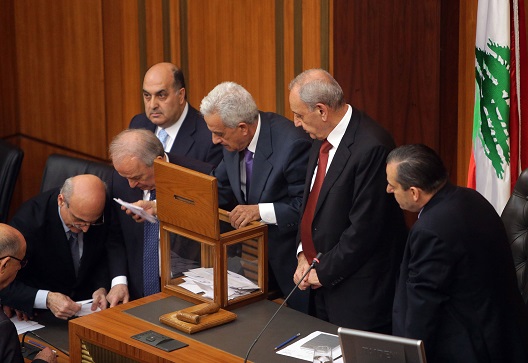 Lebanese members of parliament count the votes after casting their ballots to elect the new Lebanese president in the parliament building in downtown Beirut April 23, 2014. Lebanese parliamentarians failed to elect a new president in a first round of voting on Wednesday, with leading candidate Samir Geagea falling well short of the required two-thirds majority. (Photo: REUTERS/Joseph Eid/Pool)

The most important question underlying Lebanon’s presidential election is to what extent certain Lebanese parties—and their foreign backers—want to confront Hezbollah. It will not be answered by May 25, when the current president’s term expires, and will be largely influenced by regional developments, particularly the war in neighboring Syria.

Lebanon’s parliament—which elects the new head of state—met twice in April to vote on a new president and failed both times. Constitutionally, the legislature is supposed to elect a new president between March 25 and May 25. Under an unwritten power-sharing pact agreed in the 1940s, Lebanon’s president must be a Maronite Christian.

The Taif Accord, which ended Lebanon’s civil war, altered the country’s Muslim-Christian balance of power in the Muslims’ favor. For example, it reduced the sectarian ratio in parliament from six Christians for every five Muslims to half for each. It also handed more executive authority to the country’s cabinet, and thus the Sunni prime minister, at the Maronite Christian president’s expense.

The president today is a largely symbolic figure. As the country’s top Christian leader, however, his (or her) opinions have to be at least taken into consideration, if not respected. A president siding with one coalition or another may not mean much in terms of constitutional power to sway policy, but it is politically important.

Further, the president’s power is also related to his political base. The current head of state, Michel Suleiman, was elected as part of a political deal in 2008 that ended nearly six months of vacuum in the post and was immediately preceded by Hezbollah’s takeover of half of Beirut in the worst bout of civil violence the country had seen in nearly two decades. He was commander of the army before taking office, and had never stood for election before.

While the presidency commands respect from the Christian community, President Suleiman has no base of support and cannot argue that he represents a particular percentage of the population. Today, Lebanon’s top Christian political parties are demanding a “strong” president as Suleiman’s replacement, and by “strong” they referr to themselves—those who lead political parties and have bases of support.

Politically, Lebanon is currently divided into three camps—the pro-Western March 14 alliance, so-called centrists who can tip the balance of power one way or the other, and the March 8 alliance (of which Hezbollah is the leading member) along with March 8-allied Michel Aoun. Both March 8 and March 14 want a president on their side. The centrists, as kingmakers, have the power to side with one coalition to elect a president given that neither March 8 nor March 14 has the votes to elect a president alone.

Since the weekend before the first round of voting on April 23 and ever since, Hezbollah has made it clear that the future president must support the party, its right to hold onto its weapons, and its right to unilaterally defend Lebanon (whether by fighting Israel or doing battle on behalf of Syrian President Bashar al-Assad).

On paper, March 14 is committed to immediately curbing and ultimately disarming Hezbollah, an armed Shitte political party founded by Iran during Lebanon’s civil war. The party was the only group allowed to keep its weapons when the war ended, at the behest of then-Syrian President Hafez al-Assad and much to the Iran’s delight. In practice, March 14 often accedes to Hezbollah’s demands at the direction of the coalition’s largest member, the majority Sunni Future Movement, founded by assassinated former-Prime Minister Rafik Hariri and today led by his son, Saad. Most recently, Future led March 14 into joining a government with Hezbollah, abandoning a previous demand the party first withdraw its forces from Syria.

Any presidential candidates March 14 puts forward would face an uphill battle in getting elected (the coalition’s only candidate thus far only received 46 of 124 votes, far short of the threshold needed for success) and would have a difficult time reigning in Hezbollah.

Hezbollah’s alliance with Maronite Christian former army commander Michel Aoun allows the party to argue it has cross-confessional support. The last two parliamentary elections showed Aoun is the most popular Christian politician, although his support dwindled some between the two contests. If Aoun and Hezbollah remain allies, a March 14 Christian president attempting to move against Hezbollah can easily be dismissed as a partisan politician who represents less than 50 percent of the Christian population and only around half of the country at large.

The common perception in Lebanon is that Aoun would do anything to become president. For over a year, Aoun has been working hard to woo the Future Movement – and the party’s top foreign patron, Saudi Arabia – and put some light between himself and Hezbollah. Aoun has by no means broken his alliance with Hezbollah, but has made small moves indicating he is not in complete lockstep with the party.

Because of his strong support base and ties to the army, Aoun could stand a chance in confronting and demanding concessions from Hezbollah. He is best suited to begin weeding out, if not completely eradicating, Hezbollah’s ties with the armed forces and could even push the army to be more vigilant in the South, where Hezbollah built complex bunkers and weapons storage facilities between 2000 and 2006 without raising an eyebrow—something the party is likely replicating in an improved form as it prepares for future battle with Israel.

That said, March 14 and the country’s most important centrist politician, Walid Jumblatt, seriously distrust Aoun; March 14’s Christian parties all but loathe him. To date, Future and Aoun have not reached any agreement on the presidency. Indeed, Future reportedly told Aoun he must get backing from March 14 Christian parties before the party will even consider voting for him.

It is far from clear if Aoun would be willing to abandon Hezbollah, if he can be trusted to actually do so even if he promises to, and if he can secure Christian support from within March 14 or the needed support from centrists. The answers to these questions are also not entirely limited to internal Lebanese deliberations. Syria not too long ago dictated election results at almost every level in Lebanon, and Damascus’ influence is not entirely gone.

Lebanon’s religious communities and political parties have ties to the United States, Europe, Saudi Arabia, Syria and Iran, to name a few. The county has long been seen as a barometer of larger geopolitical forces, and everyone in Lebanon—from taxi drivers to elected officials—claims that geopolitical actors outside Lebanon will have the final say on the presidential election and see the contest linked to the war next door.

Whether or not the election is truly tied to a regional “grand bargain” devised in Washington, Moscow, and Tehran is impossible to verify. Regardless, whoever comes out on top in Syria’s civil war – and whatever deal making is involved in ending the conflict – is an extremely pertinent factor in local Lebanese politics.

Many in Lebanon expect the current president to leave office with no successor in place. While such a scenario would weaken the already fragile office of the presidency, six months of void preceded the current president and the country remains intact. For now, Lebanese politicians will continue to insist a president should be elected by May 25, but ultimately the choice will be made beyond Lebanon’s borders.

Matt Nash is a journalist covering Lebanese politics for NOW Lebanon since 2008.