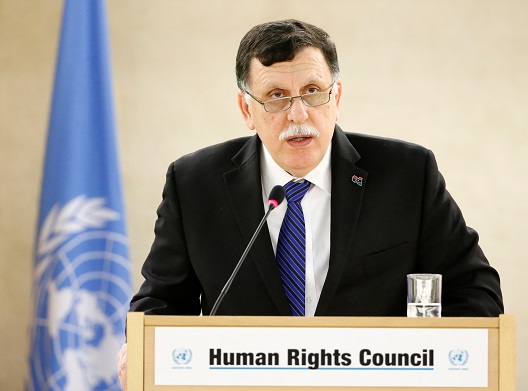 On March 30, 2016, Prime Minister Fayez al-Serraj and a few other members of Libya’s Presidency Council (PC) and Government of National Accord (GNA), the two government bodies that the UN-brokered Libyan Political Agreement (LPA) established, arrived to Tripoli’s Abu Sita navy base after having operated in Tunisia for three months. While the international media and diplomats cheered the move as a major step toward stabilizing Libya, it was actually the beginning of the end the GNA and PC.

The move to Tripoli, which UN Special Representative Martin Kobler had encouraged, handed al-Serraj over to the mercy of the powerful militias in the capital. The Prime Minister is an upright person from Tripoli’s upscale Hay Andalus district, with no familiarity with dealing with armed groups. While the United Nations and some European countries organized “feel-good” meetings and signed agreements with al-Serraj, the situation in the country deteriorated, particularly in the capital. Libya’s elected and internationally recognized parliament, the House of Representatives (HoR) refused to endorse the GNA, dismissing its core purpose and ensuring that a political battle would parallel the military one. The HoR relocated to Tobruk in East Libya after Islamist militias forced it out of Tripoli.

Fast forward to the present. A few weeks ago, fighting intensified as the Sirte basin and Tripoli have become major battlefields again. The Libyan National Army, which Field Marshal Haftar commands, is battling the Islamist-leaning Benghazi Defend Brigade (BDB, in Arabic: Suraya Difaa Benghazi) for control of Libya’s most important oil terminals, Ras Lanuf and al-Sider.

The picture in Tripoli is more complicated. In theory, there are two sides: a pro-GNA militia block, supporting the internationally recognized GNA, and a pro-NSG block, siding with the Islamist National Salvation Government (NSG) of ‘prime minister’ Khalifa al-Ghwell. But the reality on the ground is very different. All the individual militias are first and foremost interested in maintaining their own power and influence. Most of the pro-GNA militias support al-Serraj only in as much as they consider him a useful tool. All the important militia leaders siding with the GNA, rejected a ceasefire brokered mid-March by some members of the PC and shows how quickly militias can change colors.

In fact, al-Serraj and his GNA are helpless between the mighty militia blocks, with no real possibility of influencing developments on the ground. As things stand, they are doomed to failure, and with them the UN-brokered LPA.

Although Libya’s most important economic organizations, the Central Bank of Libya (CBL), the National Oil Corporation (NOC), and the Libyan Investment Authority (LIA) recognize the GNA, al-Serraj has not been able to solve the country’s economic difficulties. The cash crisis—a combination of inflation, black market currency exchanges, and general lack of funds—continues to worsen and power outages are frequent. High subsidies on fuel and basic foodstuff are a strain for the budget and smuggling is an endemic problem costing the state several hundred million dollars a year. The CBL is still financing competing administrations in the east and the west and paying former “thuwwar” (revolutionary fighters who are eligible for payments from the state). Corruption is out of control. The combination of problems is melting away the country’s cash reserves.

On the security side, al-Serraj lacks influence on the jihadists in Benghazi and Derna, on the Misrata militias, and the BDB. The refugee deal recently signed by Italian Prime Minister Gentiloni and Libyan Prime Minister Serraj is just words on paper because the GNA has no means to enforce it.

After the recent heavy fighting in Tripoli, the hostile protests against Misrata, and violent attacks against its Misrata citizens in Tripoli, the Misrata local government suspended its contacts with the PC,  feeling that its citizens and institutions were being targeted because of fighting with Misrata militias. Before this, Misrata had been among the strongest and most powerful supporters of the GNA, even providing security details for the GNA, but now the city council is debating whether to continue supporting the GNA.

Although it is easy to blame the HoR for not endorsing the GNA, it has no real reason to do so. The HoR is not willing to accept a government that cannot act independent of the armed gangs in Tripoli. At this point, whether the HoR endorses the GNA and Haftar or the GNA support al-Serraj is irrelevant—he is focused on his own survival among the militias in the capital, a struggle in which neither the HoR nor Haftar can be of much help.

Martin Kobler’s experiment with the PC-GNA-Serraj is about to fail, and with it the reputation of countries that backed these groups. To stabilize Libya and restore international credibility, a powerful nation needs to take the lead in organizing stakeholders to implement future agreed upon plans. The United States is the only one capable of doing this.

An immediate and comprehensive ceasefire—except for the fight against terrorist groups like al-Qaeda and the Islamic State—needs to be brokered and supervised. Libya’s neighbors have an important role in this process, wielding their influence on proxies to make them cooperate. The United States does not need to put boots on the ground, but it does need to bring together stakeholders to create a neutral observer force that can enforce the ceasefire from the ground and sky. Otherwise hostilities will break out again.

With a ceasefire in place, Libya can move into a transitional phase. It is too early, and the mechanisms are not in place for a country-wide reconciliation. The transitional period should focus on bringing peace to Libya in parts (its three historic provinces).

An amended form of the Libya’s 1963 constitution, which Gaddafi abandoned in 1969, can be used in the interim period. Legally, it can be argued the constitution is still in place. The constitution will need to be amended to ensure the distribution of the oil wealth between the regions. Some provisions of the 1951 constitution, such as article 36 about central government powers and article 39 about provincial powers, can also be used. For the head of state to have respect and authority, he must either be a well-respected person or the Libyan crown prince.

The location of the interim government cannot be Tripoli. Though it is the capital, residing there puts the government at the mercy of the militias. An international protection force could secure a safe zone until the new government has sufficient forces of its own.

There are already small scale international development programs that support local government and civil society development, and with a ceasefire in place these programs can be scaled up. The current programs have had limited success accessing the central government and large cities due to the presence of militias. Programs that worked on elections and constitution development have largely been a failure, and will continue to be so until a certain level of stability is achieved.

Image: Photo: Faiez Mustafa Serraj, President of the Presidency Council of the Government of National Accord of Libya attends the 34th session of the Human Rights Council at the European headquarters of the United Nations in Geneva, Switzerland, February 27, 2017. REUTERS/Denis Balibouse