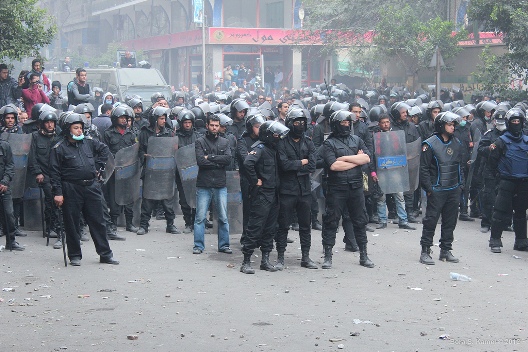 Since the foundation of the first republic in 1952, Egypt’s rulers, regardless of name or political orientation, have struggled to distance the Egyptian people from politics and strip its individuals from the ability to act independently from the state. To ensure its success, the state nationalized the public and political spheres, seeing to it that they are managed and controlled exclusively by the state’s coercive apparatuses. The individual right to express oneself through protest, marches, public conventions, and even the media, was limited. Nowhere has this been more evident in Egypt’s recent history than with the laws governing the right to assembly. Repressive laws continue to stifle the right to protest, while government after government praises the street movement that brought it to the helm of power. On Tuesday, Prime Minister Hazem El-Beblawy’s cabinet joined these ranks, passing a highly repressive protest law, which is currently under review by the interim president.

The state has employed a variety of legal and security procedures to guarantee its position. More often than not, any challenge to its formal or informal authority is met with a violent response. Emergency law was, and continues to be, the umbrella under which the state restricts individual freedom and activism. The revolution radically altered the state-society relationship in Egypt. It is no longer a one-way or a top-down relationship, but whether it through the drafting of laws or through the use of excessive violence on the part of the security apparatus—the state is constantly attempting to restore this dynamic.

The January revolution brought with it a hope for a balanced relationship with the state as well as a hope for free access to public spaces. People aspired to a new authority that respects human dignity and the right to protest and rejects draconian state policies, and the abuse of power by state officials, especially within the security apparatus. These hopes, however, did not appeal to the power structures and institutions founded on the ideas of a leviathan state, in which the government owns all forms of power. The interim rulers of Egypt, whether the Supreme Council of Armed Forces (SCAF), the ousted Muslim Brotherhood president Mohamed Morsi, or the current interim government, have sought to restrict people’s hopes and regain the state’s absolute control over public spheres and spaces.

Under the pretext of protecting the state’s authority and prestige, maintaining public order, differentiating ‘honorable’ citizens (al-Mowatneen al-Shorafa’) from thugs and keeping the ‘wheel of production’ turning, each of these regimes sought to create a legal framework that enables it to restrict freedom of expression and access to public and political spheres—namely the right to stage marches, protests, and public gatherings.

The proposed text of the new draft, which places many restrictions on the right to protest, bears an uncanny resemblance to the protest law drafted by Ahmed Mekky, the Minister of Justice in Hesham Qandil’s government, under Morsi. Worse yet, according to a governmental source, the current interim government is discussing a proposal to merge the protest law with a draft law to fight terrorism. Comparing Mekky and Beblawy’s draft laws demonstrates the insistence of Egypt’s rulers to once again bring society under the control of the state.

Although both drafts recognize the right to freely express opinion through peaceful protest, both drafts place many restrictions on this right. Both versions of the law require organizers to give the police prior notification about the protest and its location. In the case of Mekky’s draft proposal, prior notification was required five days in advance, while in Beblawy’s draft, it has been extended to six days. The notification must include the following information: the route, location, starting time and duration of the protest. Additionally, organizers must provide a statement that includes the overall theme of the activity, its purposes and the demands the participants are calling for, and, finally, a record of the organizers’ names. Mekky’s draft proposal required only the names of three organizers (Article 7), whereas the new draft requires the names of all organizers (Article six).

Both drafts required the minister of interior to form a committee in each governorate, headed by the director of security. That committee will be tasked with specifying restrictions and safeguards that secure the protest. It is tasked with determining the means to be used in the event that the protest is no longer peaceful, and lives and public and private property are put at risk. The committee also has the right to change the protest route or location if deemed necessary in order to properly secure it.  Moreover, both versions gave the minister of interior or director of security the right to ask the ad hoc judge to cancel, postpone or move the protest to a different location or route. The judge must expeditiously issue his decision, while also stating his reasons for the change. This mandate reveals massive discretionary powers given to state officials, particularly security officials, allowing them to prevent protests of their choice from taking place. With no clear regulations that prevent security officials from abusing this right, this draft law will allow the state to undermine the individual right to protest, march, or convene.

Article 11 is another example of the discretionary power afforded to the security forces. It states that in the event participants in the protest behave in way that is “considered a punishable crime, or violates the peaceful nature of expressing their opinion, security forces in official uniform have the right, based on orders from the field commander, to disperse the gathering.” Due to the article’s ambiguous wording, the nature of those punishable crimes is unclear, and could be interpreted in a way that grants security officials excessive authority to end the protest.

Both drafts also prevented protestors from escalating their actions beyond marches, protests, or public gatherings. The drafts explicitly prohibit participants from extending the protest into a sit-in. In addition, both prevent protests from coming within a certain distance of the presidential headquarters, parliament and Shura Council, ministry and governorate headquarters, courthouses, foreign diplomatic missions, police stations and prisons, among other institutions. Article 14 of the current draft states that protests must allow for a ‘protest-free’ distance of 50 to 100 meters. The current draft is only marginally better than Mekki’s, in which that perimeter was designated up to 500 meters. The previous draft also afforded the cabinet the right to add more locations due to security considerations, while the current version mentions only the specific locations.

Both drafts impose punishments of fines and imprisonment in the event that the restrictive law is violated, or if individuals pay or receive money to organize protests.

The violence that has gripped the country since Mohamed Morsi’s ouster on July 3 has given the state the chance to legitimize its assault on society, under the label of fighting terrorism. Meanwhile, through its actions, the Muslim Brotherhood’s has increasingly isolated itself. This has led to the general population supporting not only a state crackdown on them, but on society as a whole, as people welcome the draft protest law as a means of restoring ‘stability.’

A comparison of both draft laws demonstrates the fact that no matter who is in power, regardless of the democratic slogans they raise, they are only seeking to reaffirm the state’s absolute control over freedom in Egypt’s public and political spheres. Worse now is the fact that society is eagerly pushing the state towards narrowing the scope of freedoms, and restricting the right to protest.

Mohamed Elgohari is an Egyptian academic with varied experience on Arab and Middle Eastern Affairs. He is a recipient of the prestigious Ford Foundation International Fellowship, which provided him with a full scholarship to complete his MA at New York University in Comparative Politics. He worked as a researcher in Cairo for a number of academic institutions. His articles have been published in outlets including Jadaliyya, World Politics Magazine, and World Press. He is currently an intern at the Atlantic Council’s Rafik Hariri Center for the Middle East and a regular contributor to EgyptSource.