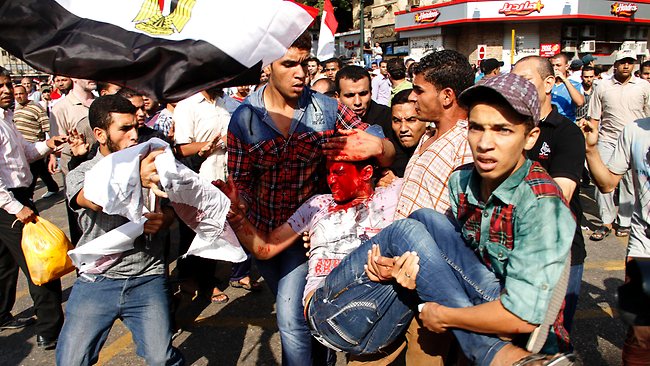 Tahrir has witnessed countless clashes over the past year and a half, and today there is once again the need to set up a field hospital to treat the wounded, as harsh words are exchanged, conflicting slogans are chanted and men pelt stones at one another. The clash is not occurring between protesters and the Central Security Forces (CSF) or the military police, but rather is yet another occurrence of a clash taking place between protesters themselves as yet another struggle for ownership of Tahrir breaks out.

As Morsi’s first 100 days in office came to a close, liberals, leftists and nationalist parties came together with one call – to take to Tahrir on Friday October 12 in what was dubbed ‘Accountability Friday.’ Issuing a joint statement, the parties and movements made several demands, which included calling for a new Constituent Assembly that truly represents Egyptians, as well as for the goals of the January 25 uprising to be fulfilled. The protesters also called for “justice for the martyrs”. While the list of demands was dominated by overtones of disappointment in Morsi’s performance to date, Mohamed al-Baradei’s Constitution Party specifically instructed its supporters not to engage in anti-Morsi or anti-Brotherhood rhetoric. Regardless, there have been reports of anti-Morsi chants in Tahrir.

With an acquittal announced for all defendants in the infamous Camel Battle trial, the bloodiest day seen in the 18 day uprising, expectations for the October 12 protest were heightened. The verdict is one in a long string of many acquittals, with no one held accountable for the deaths of hundreds of Egyptian protesters. Rather than just galvanize original calls to protest, it also prompted the Muslim Brotherhood to put out a statement announcing they would also “respond to calls for million-man protest marches around the country.”

As the various protests converged on Tahrir, skirmishes were reported, with fistfights breaking out between anti and pro-Morsi supporters, amid news that members of the Revolutionary Socialists group trying to prevent Brotherhood members from entering the square. It culminated with protesters attacking and tearing down the platform erected by presidential candidate Hamdeen Sabahi’s supporters. Reports emerged that pro-Brotherhood supporters were behind the attack, but the organization has denied these claims.

On Twitter, Brotherhood leader Essam al-Erian put out a call to the Brotherhood supporters in Tahrir to march to the High Court. Despite that, the official Muslim Brotherhood was quick to disassociate itself from the clashes claiming on Twitter that their members were not involved. Brotherhood spokesman Mahmoud Ghozlan echoed this statement saying that its members were not heading to Tahrir until after afternoon prayers, as well as denying responsibility for the attack on the platform. He stated, "Our members haven’t attacked anyone, the people fighting are supporters of the president."

Regardless, in a disturbing déjà vu, activists have begun to put out calls for medical supplies, and a Twitter account that often coordinates these activities has sprung back into action, and as the situation intensifies, it becomes impossible to determine a protester’s political affiliation. According to initial reports from the Ministry of Health at least 12 have been injured in the clashes.

Many have questioned the Brotherhood’s decision to call for a protest in the same location, labeling it an attempt to sabotage Accountability Friday. Others, among them Ahmed Khairy, the spokesperson of the liberal Free Egyptians Party, also questioned the logic behind the Brotherhood taking to Tahrir, the very symbol of resistance in Egypt, when they are for all intents and purposes, the nation’s ruling party. A struggle to control Tahrir continues to emerge in Cairo, and is yet another example of the Brotherhood unable to make a definitive choice between politics and protest. As attention turns once again to clashes in Tahrir, one of the driving forces behind the call to protest – Egypt’s draft constitution – is again forgotten.

Video of the stage in Tahrir being dismantled: