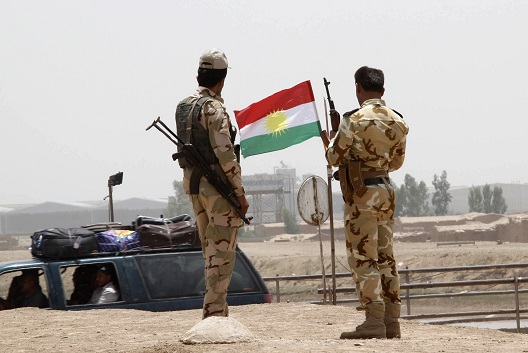 The United States has opposed Kurdish ambitions in both in Iraq and Syria for more autonomy, citing the sovereignty and territorial integrity of the Iraqi and Syrian state. The Kurds have been one of the few genuinely pro-American people in the region and are currently the only force that is able to fight the militants of the Islamic State of Iraq and the Levant (ISIS) and protect Christians, not Baghdad nor Assad.

The United States remains stuck in the old paradigm of Syrian and Iraqi states as created by the West through the Sykes-Picot agreement in 1916. Now, with the weakening of the Sykes-Picot borders as a result of the downfall of Saddam Hussein in 2003 and the Arab Spring in 2011, the United States should reconsider its policies of opposing Kurdish autonomy in both Iraq and Syria.

Despite initial US efforts to disband the Kurdish armed forces, the Peshmerga (those who face death in Kurdish), it eventually recognized the military strength of these forces and their utility as allies. The Kurds helped the US army after the 2003 invasion to catch Saddam Hussein, captured Osama Bin Laden’s messenger in 2004—which led to the death of the al-Qaeda chief—and are now the only force in Syria that is able to fight the ISIS militants. Working with moderate rebel opposition forces in the Aleppo province, Kurds have managed to block ISIS inroads into the area and even threatened its supply lines.

Unlike Baghdad’s sectarian policies of arresting and provoking Sunnis in the Sunni triangle and massacring Arabs in Kirkuk in 2013, the Kurds have acted wisely and solved their difference with the Sunni Arabs in Mosul through a deal with their long-time former adversary, the Mosul governor Athil al-Nujayfi who now fled to Duhok, in Iraqi Kurdistan. In their newly established administrations in Syria, the Kurds have started to work together with Arabs and Christians, and integrated them in their security forces to fight against ISIS and Assad.

Despite these achievements, the United States hopes Iraq and Syria will again be recentralized under the control of friendly Arab allies. As such, it heavily supports Baghdad against the Kurds and publicly condemns Kurdish autonomy in Syria. The US-trained Iraqi army suffered a massive defeat within a few days in Mosul; its only accomplishment was provoking local residents.

The United States also tried to force Syrian Kurds to join the weak Syrian Opposition Coalition in Geneva 2, even though the coalition rejects any form of Kurdish autonomy. While the Syrian coalition was based outside of Syria, the Kurds in Syria helped moderate FSA groups fight against ISIS and combat the influence of Islamist groups.

Kurds in Iraq and Syria protected and trained Christians against the increasing threat of Islamist militants under the black flags of the ISIS. In northern Syria, Kurds supported the Christian Syriac (Assyrian) militia Sutoro in the Hasakah governorate to defend against radical militants targeting civilians and churches. In Iraq, Kurds have hosted thousands of Christians from across Iraq fleeing violence and trained militias to defend Christians in Mosul.

A Syriac Christian, named Omid, who returned to Syria from Switzerland to fight with the Kurds against the ISIS and Assad, points out that the West has failed to recognize the strength of the local Kurds and Christians in northern Syria that are now defending their land. He noted that Assad is not an alternative for the Syrian opposition, given his support for radical Islamist militants to fight against coalition forces in 2003 and cross the Syrian-Iraqi border.

Michael Hayden, who until 2009 was head of the Central Intelligence Agency, now suggests that the Bashar al-Assad maybe the best option for the United States—despite the fact that it was Assad and Iran that were heavily involved in bolstering the Islamist threat in the region. Syrian Kurds believe that Assad still supports Islamist militants against the moderate Syrian opposition. They suggest Assad supports ISIS to distract from Western backing of Syrian rebels and to destroy the local opposition in Syria.

“Everybody knows there is an agreement between ISIS and the Syrian regime. They do not bomb [ISIS] headquarters, and then ISIS cleans areas of Syrian rebels for the Assad regime, and leave their positions without a fight if the regime wants,” said Abdulkarim Saroxan, the self-proclaimed defense minister in the Kurdish administration in Syria.

It is high time the United States accepted and supported the Kurds in Syria and Iraq to counter the ISIS-threat and to protect minorities in the region. The Kurds captured Mosul with the US Special Forces on April 11, 2003, and with or without US support could easily recapture the city with proper backing from Baghdad. In northern Syria, the Kurds (with Western support) could help Syrian moderate rebels to destroy the ISIS-stronghold in Raqqah, and clear out the ISIS from most of northern Syria. The Kurds might be the only force in the region that can defeat and destroy the ISIS, both in Syria and Iraq.

Wladimir van Wilgenburg is an analyst of Kurdish politics for the Jamestown Foundation and a contributing writer for Al-Monitor. He is currently reporting from northern Iraq.

Image: Members of the Kurdish security forces stand at a checkpoint during an intensive security deployment on the outskirts of Kirkuk June 11, 2014. Baghdad will cooperate with Kurdish forces to try to drive militant out of Mosul, Iraq's foreign minister said on Wednesday, a day after an al Qaeda splinter group seized the country's second biggest city. (Photo: REUTERS/Ako Rasheed)