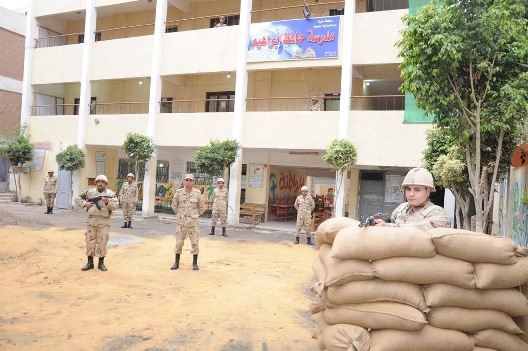 In the middle of a relentless state campaign pushing for a ‘Yes’ vote on the new constitution put forward in a national referendum today and tomorrow, it is clear that the state has all but given up any pretenses of a democratic process.

Giant billboards trumpet a clear message: “Yes to the Constitution.” The same message is written on cardboard cutouts hanging on every other street lamp on Cairo’s 6th of October Bridge. Neutral ‘get out the vote’ campaigns have been few and far between and more often than not used barely subliminal messages: “YES to the referendum, NO to darkness.” Egyptians have joked for days that the ballot will likely feature only one option: vote yes.

And campaigns encouraging a ‘no’ vote have found it practically impossible to get their message out. The governor of Wadi-al-Gedid, an army general himself, declared that anyone caught putting up posters encouraging people to vote ‘No’ would be subject to legal punishment, as the posters “would be defacing public buildings.” His comments were echoed by some of his counterparts around the country. Further north, police seized leaflets in the apartment of a Muslim Brotherhood leader that called for rejecting the constitution in the coastal city of Ras-al-Bar. The article in state newspaper Al-Ahram, describes the raid in the same terms it would a drug bust. Most recently, members of the Strong Egypt Party were arrested while distributing posters encouraging a ’No’ vote. A number of them have since been released pending charges, but at least three remain in custody.

Expatriate voting rules were hastily amended days before the voting revoking the option to vote by mail-in ballots, necessitating that citizens vote in person. This prevented many Egyptian expatriates, the bulk of whom live in the Gulf, from weighing in on the vote. Ultimately, the expatriate turnout was around 15 percent, down from 40 percent for the 2012 constitutional vote.

The number of non-governmental organizations approved to observe the referendum was highly restricted, and those who received authorization to approve are likely to issue a stamp of approval – something to the tune of “inconsistencies observed do not undermine the overall integrity of the process,” thus lending much sought-after legitimacy to the process. However, the leading international institutions that often undertake electoral observation missions such as the Carter Center and the European Union opted instead to deploy small teams that will not be observing the actual polling.

The media, both state and private, continues in its post-July 3 tradition of unbridled support for the government position – a new low in the consistent decline of media professionalism of the past few years. Al-Ahram no longer asks how people will vote, but rather asks, “Why are you voting yes?” Once-independent media is following a similar line. Al-Masry Al-Youm has not only pushed its own agenda through the newspaper, but has also been using its breaking news mobile messaging system to press readers to cast a ‘yes’ vote.

The entire process has been conducted with a meager attempt at fair public debate:  the government deliberately decided that no substantive debate should take place about the very document people are being asked to approve. The Egyptian government has followed its all too familiar ‘attrition war’ strategy, and there was little room for an intelligent discussion of  the virtues and demerits of the constitution. Considering the government crackdown on dissenters, few are willing to risk their freedom to educate people on its flaws. And many activists I have spoken to, all loyal to the ideals of the 2011 revolution of a civil state for all Egyptians, are opting to boycott the vote altogether.

While this sentiment finds its roots in a bitter understanding of the political game summarily played by the government, we must acknowledge that far too many in the Egyptian public are unwilling to stop and think critically. And this is perhaps the real irony: the illusionist is barely trying to conceal his trick, but the audience still chooses to gullibly play along.  The blame should be laid at the feet of both.

It may be difficult to understand why the government is going to such great lengths to ensure the constitutional referendum is a complete success, given that there is an infinitesimal possibility the document is rejected. However, the constitutional referendum is not only about the constitution—rather, the rate of voter turnout and degree of support will speak volumes as a plebiscite of the popularity of the government and Abdel Fattah al-Sisi. Al-Sisi’s presidential bid looks more and more likely by the day.

Al-Sisi’s comments have positioned the vote on the constitution as a vote of confidence in his leadership, and as such, he needs the result to be an overwhelming endorsement.  Many fear that the government will deliberately obfuscate turnout numbers, and at the same time, highlight positive international observer reports that gloss over the inherent weaknesses in the system and the lack of transparency.

The constitution, flawed and lacking as it may be, will undoubtedly pass, amidst much state-sponsored fanfare. Cynically, one could say that the relevance of the constitutional text will take a backseat to the reality of state capture and collusions of the legislature.

A more hopeful observer will see in the ruling regime’s resounding victory the beginning of its end. Not unlike the Muslim Brotherhood a year and a half prior, a military-led government intent on consolidating and maintaining its power will recklessly ride its wave of success to its own demise.

Mohamed El Dahshan is a senior research fellow at the Harvard University Center for International Development and an award-winning writer.