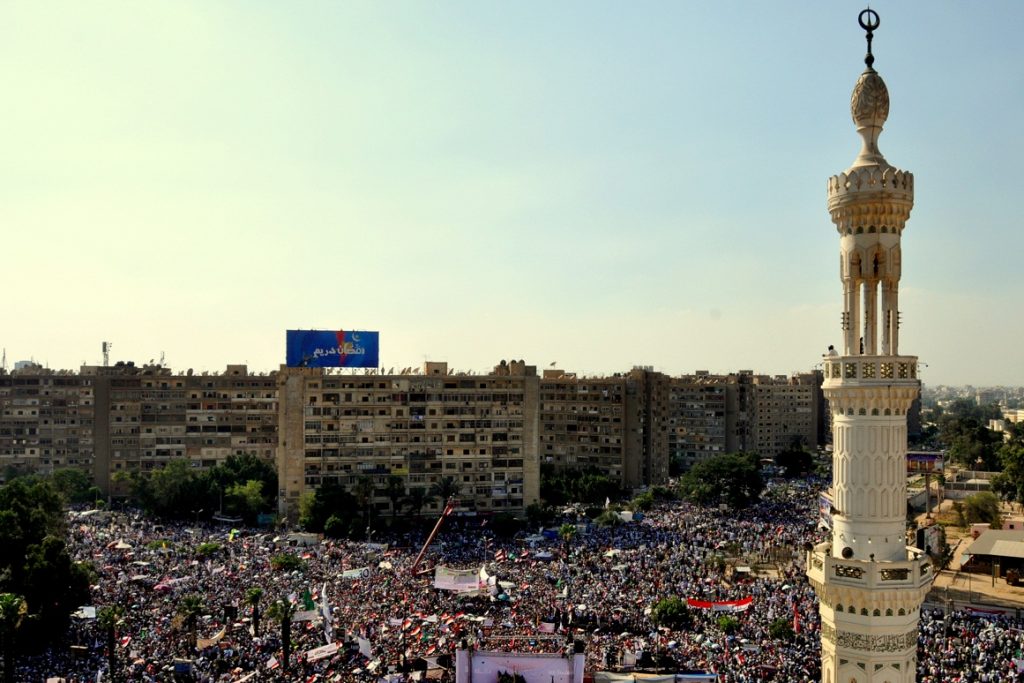 “Egypt is now past describing what happened.”

Egyptian ambassador to the United Nations Wafaa Bassim while discussing if the June 30 uprising was a coup or not.

“Egypt’s future is determined by the people not by a rebel group [Tamarod].”

Essam al-Erian, vice chairman for the Freedom and Justice Party, while speaking in Raba’a al-Adaweya to pro-Morsi supporters.

Cashing In After The Coup | Shana Marshall, The Middle  East Channel

Shana Marshall writes of the ongoing political debate on the United States military aid to Egypt. While simply stating the facts, Marshal also highlights where and how the money is used as well as if this $1.3 billion actually secures the US interests in the Middle East.

“The July 3 coup d’état may have been accompanied by unprecedented popular support, but our normative rejection of coups as a legitimate method of resolving political conflict is based on a consensus that the armed forces should always be subordinated to an elected civilian leadership and never acquire the status of an institutionalized political actor.”

“The claim that a halt to military aid would jeopardize the cold peace between Israel and Egypt is ludicrous, as decades of carefully orchestrated U.S. military aid to both countries has produced a perpetual arms buildup in which Israel always maintains the upper hand. Egypt’s military decision-makers would never go to war with a better-armed Tel Aviv; the rationale that led to that action in previous decades — to bring Israeli leaders to the negotiating table over the Sinai — no longer exists.”

“Egypt’s crisis has been called the worst in its history. But in fact, it bears a striking resemblance to a previous episode, almost 60 years ago.”

Omar Ashour comments on the similarity between the events and protests of 1954 and the 2013 coup. He highlights the consequences of the 1954 military power grab and how the recent events in Egypt can lead to similar consequences.

“The similarities between February-March 1954 and June-July 2013 are numerous. In both crises, zero-sum behavior and rhetoric, mobilization and counter-mobilization by a divided public, and deception by (and manipulation of) the media were the order of the day.

Any resolution to the current crisis should aim to save the remnants of the only gains made so far in Egypt’s revolution: basic freedoms and democratic institutions. That will require ceasing violent repression, stopping propaganda and incitement in pro-junta media and at pro-Morsi protests, and trust-building measures.”

The armed forces released this 30-minute propaganda video highlighting their strength as well as why it was necessary for them to intervene in the society when they did on July 3.

Listen to NPR clip titled “Egypt’s Polarization Descends Into Personal Relationships” in a discussion on how the death of protesters and the violence in the streets has divided society, seeping into even people’s homes and families.

“Ahmed Assem has become the poster child of what Muslim Brotherhood leaders are calling a massacre—last Monday’s assault by security forces on angry Islamist protesters. Assem was a photographer who filmed his own death. An army sniper shot him down. The killing has torn Assem’s family apart. His brother is a police officer who blames the Brotherhood for the violence, but the family, like Egypt itself, is now deeply divided and unsure what is to come.”

Translation: The Month of Ramadan in Sinai

(One bedouin to the other about the terrorist) “Do not worry, that guy is just the ‘Masaharaty’” (The masaharaty is is the man who goes around a few hours before dawn to wake people for their last meal and prayer before the new day of fasting begins).