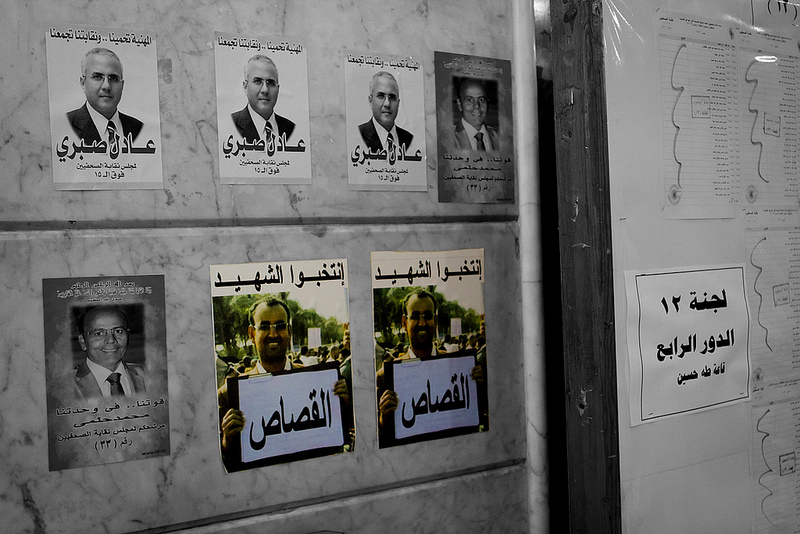 EGYPT IN THE NEWS

On the Egyptian opposition

Issandr Amrani points out the problems with Egypt’s floundering opposition:

"Anyone who follows Egyptian politics will have probably made two broad conclusions by now. First, that the Muslim Brotherhood and President Mohammed Morsi, out of a combination poor judgement, paranoia and greed, have made the choice of sacrificing the possibility of a stable and inclusive transition for the sake of consolidating their control over the old regime machinery rather than reforming it. Second, that the "liberal" or secular opposition gathered under the banner of the National Salvation Front (NSF) is missing a golden opportunity to benefit from the Brotherhood’s actions and the public indignation they have caused by behaving in an utterly politically clueless manner…

…I spend much of my time, on this blog and elsewhere, criticizing the Brotherhood’s disastrous handling of politics in the last two months. They deserve full blame for the situation of the country, and should be the ones making concessions to get out of the current situation. And too often others, notably outsiders, make excuses for them. But the NSF’s ineffectual leadership has made this all the more easy, with no clear alternative being proposed to counter the narrative that the “opposition” are just a bunch of spoilers. I don’t believe it’s that simple, but they are unable to counter that idea without putting forward some serious, well-thought-out proposals.”

Michael Hanna writes about the flaws in the current US policy towards Egypt:

“In dealing with the country’s newly-empowered Islamists, U.S. policy in Egypt remains trapped in the old ways of thinking that produced a bet on authoritarian stability…Since the fall of Mubarak, the United States has adopted a defensive crouch in Egypt that is primarily driven by fears that the treaty might be discarded by Egypt’s new rulers. This narrow and blinkered approach to Egypt misunderstands Egyptian national interests, and undermines the formulation of constructive policies. It also has pushed the United States to focus outsized attention on the cultivation of ties with the now ascendant Muslim Brotherhood, often heedless of broader Egyptian political dynamics…

…The United States rightfully claims that it does not support specific political parties in Egypt but is instead supportive of the democratic process. Its recent actions have undermined this intent. More importantly, by signaling its unconditional acceptance of Morsi and his government, the United States has encouraged the very actions that now jeopardize the success of Egypt’s transition from authoritarianism.”

Tarek Radwan focuses on how US policy has affect Egypt’s secular liberal parties:

“In the two years since the beginning of Egypt’s transition to democracy, nearly every point of inspiration delivered in Obama’s [February 2011] speech suffered a major setback. Even promises of US assistance to Egypt remain only partially fulfilled at best. The most glaring gap in US support to Egypt, however, lies in the arena that can most significantly impact the democratic transition: support for liberals and liberal ideology. With news that newly appointed US Secretary of State John Kerry would soon arrive in Egypt, expectations run high in the hopes that the Obama administration can move away from an economy-based approach and instead engage in a new political strategy that supports the transition to democracy and fulfills the president’s promise…

…At minimum, Kerry should pressure Morsi to immediately register the NGOs facing trial and stress the importance of new law that allows rights organizations to operate freely. A memorandum of understanding between the U.S. and Egyptian government could also facilitate foreign funding to civil society groups to promote good governance and democracy. Diplomatic outreach to liberal-minded parties should also rank high in priority, with particular care given to the language used to prevent misunderstanding or distrust. Strategic concerns and economics alone, without the democratic legitimacy and strong liberal tradition needed to cement it, are insufficient to ensure security or prosperity. Although liberals have kept a courageous front, they cannot hold the line without the required assistance promised by Obama two years ago.”

Taken by Egyptian photographer Bora S. Kamel, the photo below was taken at the Journalist’s Syndicate, where Syndicate elections were postponed this week. The photo displays the late journalist Al Husseini Abu Deif alongside photos of candidates running in the 2013 elections. Abu Deif was killed in the violent clashes that broke out in the vicinity of the presidential palace in December 2012. His family alleges he was targeted..

The Harlem Shake Goes the the Brotherhood Headquarters:

Forms of protest in Egypt are taking on a more creative approach, making humorous signs seen in Tahrir during the 18 day uprising seem tame in comparison. Last week April 6 signed up President Mohamed Morsi to win a trip to outer space to staging the Internet dance craze, the Harlem Shake, outside the Muslim Brotherhood headquarters.

QUOTE OF THE WEEK

“I love dialogue. I want dialogue and I carry out all what we agree upon during our meetings.” – President Mohammed Morsi