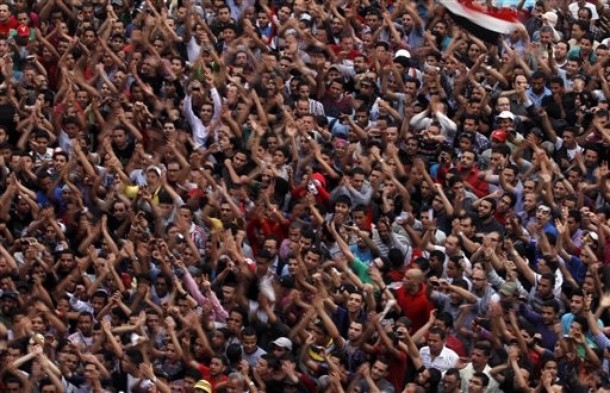 Tens of thousands of protesters representing the Muslim Brotherhood, al-Azhar and over 30 other liberal, leftist and Islamist groups are participating in a mass demonstration in Tahrir Square.

1) Tens of thousands of protesters representing the Muslim Brotherhood, al-Azhar and over 30 other liberal, leftist and Islamist groups are participating in a mass demonstration in Tahrir Square. Separate marches from as far away as Suez converged on Cairo on Friday, April 20. Another 30,000 protesters are Marching in Alexandria. The Islamist groups participating in the protest include the Muslim Brotherhood and its Freedom and Justice Party (FJP), the Salafi Front, the Salafi parties al-Asala and al-Fadila Party, and al-Gamaa Al-Islamiyya. The Muslim Brotherhood issued a statement calling on Egyptians to join the protest to protect the revolution’s objectives, demand the dismissal of Prime Minister Kamal Ganzouri’s cabinet and the formation of a new government appointed by parliament. [al-Ahram, English, 4/20/2012] [al-Masry al-Youm, Arabic, 4/20/2012]

2) Islamist presidential candidate Abdel Moneim Abouel Fotouh said he hopes a “revolutionary” candidate wins the election, and not a former regime official, noting that he disapproves of Amr Moussa’s campaign. In response to media speculation that the Muslim Brotherhood might try to assassinate him, Abouel Fotouh said, “This aims to insult an Egyptian national movement, and is an insult to all movements, not only the Muslim Brotherhood.”  [al-Masry al-Youm, English, 4/20/2012]

3) Amr Moussa said that the exclusion of leading candidates Omar Suleiman, Khairat al-Shater and Hazem Saleh Abu Ismail will play to the advantage of the remaining Islamist candidates. [al-Shorouk, Arabic, 4/20/2012]

4) Saad El-Katatni, speaker of parliament, denied rumors that proposals for a draft law setting standards for the constituent assembly have already been submitted to the People’s Assembly. Instead, he asked Mahmoud El-Khodeiry, head of the Legislative and Constitutional Affairs Committee, to conduct sessions with representatives from all sections of Egyptian society to reach a consensus on the selection criteria for the 100-member assembly. [al-Ahram, English, 4/20/2012]

5) An Islamist coalition including the Muslim Brotherhood, the Salafi groups, and al-Gama’a al-Islamiyya along with 83 Islamic scholars has called for the immediate dismissal of Grand Mufti Ali Gomaa, following his controversial visit to Jerusalem – which many criticized as tacit recognition of the Israeli state. [al-Youm al-Saba’a, Arabic, 4/20/2012]

7) IMF Director Christine Lagarde said that Egypt’s request for a $3.2 billion IMF loan “will not be sufficient” to meet the country’s economic needs and will require additional resources from donor countries. [al-Masry al-Youm, English, 4/20/2012]

8) Saudi Arabia will deposit $1 billion at the Egyptian central bank and buy treasury bonds worth $750 million by the end of April as part of a $2.7 billion package to support Egypt’s economy. [al-Ahram, English, 4/20/2012]