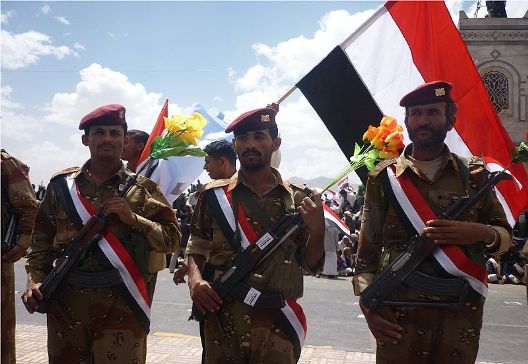 Despite the conclusion of Yemen’s National Dialogue, violence continues to plague the country, most notably with clashes between tribesman and separatists pressing for greater autonomy and government forces that have lost their confidence. The recent incidents in al-Dali’ province illustrate this acutely, where tribesmen and the Thirty-Third Armored Brigade erupted in conflict after local militants associated with Southern separatists fired at a water convoy en route to the brigade’s base; the incident escalated into a conflict defined by an all too typical, indiscriminate military shelling of civilian infrastructure. The fighting in al-Dali’ centers on a specific military outfit: the Thirty-Third Armored Brigade is infamous among locals, especially after its December shelling of a funeral killed more than twenty people—some of them children. The subsequent investigation of the incident has been kept confidential and no prosecutions were made in its wake.

Echoing wider calls in the country for local autonomy and reflecting the National Dialogue Conference’s (NDC) call for decentralization, the local tribes have demanded the Brigade be removed from al-Dali’—and the province’s security manager agrees, saying, “Its existence in the governorate is provoking further Southern calls for secession.” The central government informed the Brigade in late January that its leading officer was to be dismissed, the bare minimum one would expect after an incident like the December shelling. The brigade refused the order, choosing instead to fortify their compound and surround it with tanks.

The events in al-Dali’ are a microcosm of the biggest issue confronting Yemen’s transition: the reform and recalculation of Yemen’s security forces in the context of a democratic and decentralized system. At the moment, hopes are high as the NDC outcomes envision a brave new direction for Yemen, but on the ground, in places like al-Dali’, old ways of abuse and impunity persist. This poses a threat to the country’s future as confidence deteriorates in the government’s capacity to implement the radical changes proposed by the NDC.

Providing stability and security in Yemen is a complicated mess of a task: Houthi militants are frequently in conflict with tribes across the north; southern separatists routinely clash with the central government’s security forces; various tribal grievances continue to fester and flare; and the threat of al-Qaeda in the Arabian Peninsula (AQAP) looms. However, the long-term stability of Yemen’s proposed federal system cannot hope to overcome these challenges if at a very basic level its citizens have no faith in government institutions and security forces.

Apart from al-Qaeda, grievances in Yemen revolve around the desire for local autonomy and equal inclusion in state services and benefits (namely employment and other economic opportunities) that continue to be doled out in ways reflecting the favoritism of the country’s neo-patrimonial past. The conception that is becoming more pervasive, however, is that Yemen’s security forces are an obstacle in the way of stability and security, rather than an a source thereof. This is not just a feature of Herak’s ideology, but is evident in demands across Yemen from Houthis in the north, to average citizens in communities and tribes throughout Yemen.

What is more, when questioned by Human Rights Watch about Brigade 33’s impunity, President Abdrabbo Mansour Hadi admitted that he would be politically unable to implement an investigation’s prosecution, punishment, or even dismissal due to superseding tribal affiliations. This is perhaps the most damning demonstration of the central government’s fragility: there are elements of the military–paid and armed by the state–that are neither loyal nor accountable to the hand that feeds. If military brigades cannot be controlled by the government hierarchy, then they qualify as little more than well-armed warlord militias. The least the president should do is withdraw them from the populations that they are abusing, if indeed he is capable of that.

The desire on the part of Yemenis—in tribal areas and elsewhere—to live free from belligerent military forces does not mean they reject government authority altogether or the presence of security personnel writ large. In fact, polling conducted in late 2012 shows that the people of Yemen actually want more police in their area. The army and tribal leaders get mixed reviews throughout the country, but there’s a clear majority at 63.5 percent that report an increased police presence would make them feel safer. At present, police forces are largely absent from many areas, and where present, they are poorly trained and equipped. This is a powerful mandate to invest far more in creating an effective and accountable police force in the country—a basic state institution that is sorely lacking. When asked if police have a positive or negative impact, 49.5 percent responded that police in their area are “Not active at all;” 41 percent of respondents went on to report security is brought to their area, not by the military, police, tribal leaders, or political factions, but by “the people themselves.” When it comes to security, the people of Yemen appear to feel very much on their own.

As the country deliberates how to put in place a new federal state structure, devolving power from the central government to a more local level will be a complicated and highly-contested task. This process will also require security reform that provides greater autonomy and accountability by moving control to local, state, and governorate level decision-making. At the same time, deep reforms are urgently needed to fundamentally shift the way security and policy forces relate to the population, functioning with the consent of the populace in an effort to protect, not terrorize them, and upholding universal human rights. Taking steps to build confidence in security forces—often the most immediate manifestation of the state—will be essential to build confidence in the transition process and set the stage for the successful implementation of a federal system.

The next major phase of Yemen’s transition will be the drafting and popular ratification of Yemen’s constitution, set to be completed within twelve months, but drastically changing the relationship between the security forces and Yemeni citizens cannot wait a year. Though no effort should be spared in ensuring that Yemen’s constitution reflects the values of the NDC outcomes and recommendations, the contours of these demands are well-known and implementation could begin immediately. Indeed, the integrity of Yemen’s transition process may not survive a year if such issues are ignored much longer.