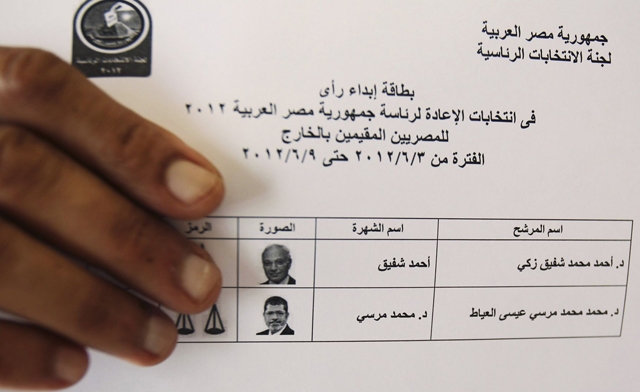 [Ahram Online, English, 6/11/2012]
With only 46 per cent of registered voters having cast ballots in the first round of Egypt’s ongoing presidential poll, it remains unclear how many will vote in next week’s presidential runoff. Some experts believe that voter turnout for the presidential showdown – slated for 16/17 June – will be even lower than it was for the first-round vote. Said Sadek, a political sociology professor at the American University in Cairo (AUC), predicted a low turnout in this month’s runoff, mainly due to dissatisfaction among wide swathes of the voting public with the two presidential finalists. Experts further note that a months-long constitutional crisis, which has left the incoming president’s powers largely undefined, may also take a toll on voter turnout in next week’s runoff. It is also worth mentioning that many working-class voters in Cairo and Alexandria were unable to travel – due to financial constraints – to their respective hometowns to cast ballots. In a bid to bolster numbers at the ballot boxes, Egypt’s current Prime Minister Kamal Ganzouri in a press statement at the end of last week announced that all state employees will be given two days holiday over the two day runoffs.

Abul-Fotouh campaign throws weight behind Mursi presidency bid
[Ahram Online, English, 6/10/2012; Al Arabiyya, English, 6/10/2012]
The campaign for eliminated presidential contender Abdel-Moneim Abul-Fotouh released a statement on Sunday declaring its support for Muslim Brotherhood candidate Mohamed Mursi. The statement emphasised that backing Mursi, who heads up the Brotherhood’s Freedom and Justice Party (FJP), represented the only way to defeat presidential finalist Ahmed Shafiq, ousted president Hosni Mubarak’s last prime minister. The Abul-Fotouh campaign added that the decision was a means of maintaining its struggle to purge state institutions of all elements of the former regime. The campaign went on to urge Mursi to encourage the public to vote for him by signing a written pledge to fulfil outstanding demands of last year’s Tahrir Square uprising; appoint a non-FJP figure to the post of prime minister; and appoint a government representative of all Egyptians in the event that he wins the presidency.

Brotherhood forms committee to mull political groups’ demands
[Egypt Independent, English, 6/11/2012]
The Muslim Brotherhood Guidance Bureau formed a committee Sunday headed by its former supreme guide and a number of group leaders to discuss demands made by some political and revolutionary organizations. Some groups demand that the Brotherhood name two vice presidents and a prime minister in exchange for their support of candidate Mohamed Morsy in the runoff election. MPs Essam al-Erian, a member of the Guidance Bureau, and Mohamed al-Beltagy, Cairo’s FJP secretary, had handed a memo to the bureau that included the demands of the political groups and urged a quick response to them to ensure votes for Morsy.

On verge of consensus, rifts reemerge over Egypt’s Constituent Assembly
[Al Masry Al Youm, Arabic; Ahram Online, English, 6/11/2012]
Liberal political parties say their Islamist counterparts have retreated from last week’s agreement over the structure of Egypt’s Constituent Assembly – tasked with drafting a new constitution – only one day before parliament plans to issue a new Constituent Assembly Law. Farid Zahran, a leader of the liberal Egyptian Social Democratic Party, said that Islamist parties had reneged on an agreement reached last week, according to which the 100-member body would be divided evenly between Islamist and non-Islamist figures. Zahran said that liberal Egyptian parties had received a telephone call from a representative of Islamist parties informing them that the 22 assembly members to be drawn from non-political entities would be counted as part of the assembly’s non-Islamist bloc. Four liberal groups have officially withdrawn from the constituent assembly, relinquishing their 6 seats to underrepresented groups including women, youth, Copts, and Nubians.

Egypt Parliament issues law regulating constitution-drafting body
[Ahram Online, English, 6/11/2012]
Parliament’s legislative committee on Monday issued a new Constituent Assembly Law regulating the work of the assembly responsible for drafting a new Egyptian constitution. Field Marshal Hussein Tantawi, head of Egypt’s ruling military council, has directed the People’s Assembly and Shura Council (the lower and upper houses of Egypt’s parliament) to convene a joint session on Tuesday to select the Constituent Assembly’s 100 members. The legislative committee drew up the draft law, which consists of 13 articles. Following an urgent session of the People’s Assembly on Monday, however, several articles were eliminated and others amended, leaving a total of 11 articles. (See article for text of the law.)

Egypt July-March balance of payments deficit doubles to $11.2 bln
[Reuters and Ahram Online, English, 6/11/2012]
Egypt’s balance of payments slid deeper into the red in the first nine months of 2011-2012 with a deficit of $11.2 billion compared to a shortfall of $5.5 billion a year earlier, as political turmoil hit investment and tourism, figures showed. The country’s economy has been hammered by unrest in the wake of the uprising that toppled Hosni Mubarak in February 2011. Tourism and investment, two of Egypt’s main sources of foreign currency, have been among the hardest hit. The current-account deficit widened to $6.4 billion for the nine-month period from July-March 2011-12, from $4.7 billion in the same period a year earlier, according to central bank figures obtained by Reuters. Egypt’s net foreign reserves, the Egyptian pound’s last line of defence against balance of payment pressures, climbed $302 million in May to reach $15.52 billion. Their growth, however, is boosted by Saudi aid as well as other slight improvements in investments in the past few months.

Government to extend the old budget until the adoption of a new one
[El Watan, Arabic, 6/11/2012]
The Ministry of Finance plans to extend the fiscal year (2011-2012) budget for the public sector bodies in anticipation of disagreement with the parliament on the budget for the new fiscal year before the end of this month. Interim prime minister Dr. Kamal Ganzouri met Sunday with the ministers of the economic group to discuss the file “interlocking debts” between the government bodies. Mr. Ismail, head of the budget organizations and economic units, revealed that the ministry will take precautionary measures to ensure the continuation of the economic functionality in the case of continued disagreement between the government and parliament to adopt the new budget. The interim cabinet also decided last week to transfer the case file related to interlocking debts to the Ministry of Planning and International Cooperation for review before returning it to Dr. Kamal Ganzouri for final approval.

Chair of the Shura’s Finance Committee: Egypt does not benefit from American financial assistance
[El Watan, Arabic, 6/11/2012]
Dr. Mohamed Fiqi, Chairman of the Committee of Finance and Economics in the Shura Council, said that the Egyptian people do not benefit the U.S. aid due to corruption. In a meeting with members and representatives of the United States Agency for International Development, he said that the Egyptian people had complained that U.S. aid was drained by the system of corruption that ruled everything from Mubarak to his mob-like regime who ruled the country. He urged the U.S. government to relieve the Egyptian people of the debt to America, which represents 10% of Egypt’s foreign debt. He argued that the $30 billion spent by USAID in the past 30 years had a $3 trillion premium due to corruption.

Egypt gas exports to Jordan cut again: Official
[Ahram Online, English, 6/11/2012]
A trial run of Egyptian natural gas exports to Jordan has been cut for reasons that remain unclear, Egyptian state news agency MENA reported on Sunday, citing a Jordanian official. The official, who spoke to Jordanian daily Al-Dustour on condition of anonymity, said that his government should look seriously for alternative gas sources to replace Egypt. Egyptian gas accounts for some 80 per cent of Jordan’s electricity production. The Hashemite kingdom imports an estimated 95 per cent of its total energy needs.