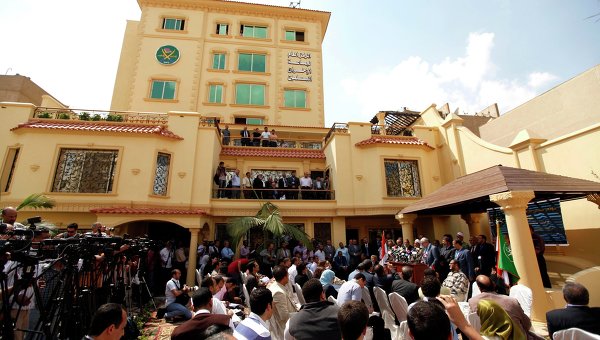 Egypt’s Muslim Brotherhood said it would defend its headquarters against protesters if necessary, raising the possibility of a confrontation at a demonstration planned in Cairo on Friday.

Dostour Party leader resigns in protest against corruption
Hossam Eissa, the deputy chairman of the liberal Constitution Party and member of Egypt’s main opposition coalition, the National Salvation Front (NSF), has declared his resignation from the party on Thursday in an open letter published on the official party’s Facebok page. Eissa said he tendered his resignation a few days ago but ElBaradei asked him to reconsider his decision and return to the party to finish structuring it. "Today my decision is final and I consider myself outside, and I am no longer associated to the Constitution Party," said Eissa. He said he resigned in protest against certain members trying to occupy permanent positions within the party. [Egypt Independent, Ahram Online, Aswat Masriya, 3/21/2013]

Egypt’s Prime Minister creates Facebook forum to engage public
Egypt’s Prime Minister Hisham Qandil has launched an extension of his official facebook page as a means for direct communication between citizens and the government, according to his statement on Wednesday evening. Qandil explained that he will collect weekly questions, suggestions and criticisms from the citizens and "promised" to reply to all the messages. "I know that we don’t agree on everything and I expect a lot of criticism. However, I promise you no matter what your inquiries are that I will answer with all honesty and transparency" he explained. [Ahram Online, DNE, 3/21/2013]

Court ruling hangs over Egypt’s Muslim Brotherhood
An Egyptian judge rules next week on whether President Mohamed Morsi’s Muslim Brotherhood is illegal, in a case that has put the group on the defensive and may stoke political tension. Seeking to shield itself ahead of the ruling due on Tuesday, the Brotherhood announced this week it had gained new legal status by registering as a non-governmental organisation, reversing a previous decision not to do so under existing laws. Brought by anti-Brotherhood lawyers, the court case points to the deep antipathy some harbour towards a group that was formally dissolved in 1954 and forced to operate underground until President Hosni Mubarak was ousted two years ago. The impact of any ruling against the Brotherhood is likely to be more political than practical: analysts find it inconceivable that the state will take any measures against a group that is now at the heart of power. [Aswat Masriya, 3/21/2013]

17 acquitted in Nile Corniche case
Seventeen defendants were acquitted on charges of assaulting the police in clashes around Tahrir Square and the Nile Corniche by the Qasr al-Nil Misdemeanor Court on Thursday. Prosecutors charged the suspects with possession of Molotov cocktails, disturbing the public order and endangering the lives of citizens. According to the state-owned Al-Ahram newspaper, the defendants denied all charges, and claimed they were arrested while passing by the clashes. [Egypt Independent, 3/22/2013]

Egyptian reassurance may fail to woo investment dollars
Earlier this month the central bank reopened a modified version of a mechanism last used in 2003 which ring-fences dollars invested in Egyptian securities. This aims to reassure foreigners that they can recover their hard currency when they sell. But with no end in sight to the slide in value of the Egyptian pound, foreigners fear that any pounds they earn on their investments will be worth fewer and fewer dollars. "Although a similar scheme was successful a decade ago in halting a drop in the value of the Egyptian pound at a time when foreign currency reserves were low, the current economic and political landscape is very different," said Oliver Coleman, an analyst at the Maplecroft risk consultancy. "Egypt is a far less attractive prospect (today)," he added. [Reuters/Aswat Masriya, 3/21/2013]

Moody’s downgrade
Moody’s Investors Service today downgraded Egypt’s government bond ratings to Caa1 from B3. The rating outlook is negative. Today’s one-notch downgrade was prompted by the following factors: 1) More than two years into the Egyptian revolution, the continued unsettled political conditions have significantly weakened Egypt’s economy. 2) The sustained deterioration in Egypt’s external payments position and government finances have reached a level at which the country’s vulnerability to economic or political shocks has widened and the risk of default has consequently increased. 3) The lack of predictability in economic and fiscal policies and outcomes, which is underscored by continued uncertainty surrounding the Egyptian government’s ability to secure financial support from the International Monetary Fund (IMF). [DNE, 3/21/2013]

Bearded officers return to Abdeen, demand reinstatement
Dozens of bearded police officers descended on Abdeen Palace in downtown Cairo on Friday to demand their reinstatement in the Interior Ministry. In the protest, called “We will not give up,” the officers called on President Mohamed Morsi’s administration to issue a resolution that would force Interior Minister Mohamed Ibrahim to reinstate them after they were suspended for growing their beards, in violation of the ministry’s dress code. The officers began to push for the right to grow facial hair recently, citing religious freedom.ٍheikh Alaa Abu al-Nasr, Secretary General of the Construction and Development party, gave a speech in which he said that beards should be allowed not only among police but also the army. [Egypt Independent, Aswat Masriya, Youm7 (Arabic), 3/22/2013]

Jama’a al-Islamiya to propose vigilante committees to Shura Council
The Jama’a al-Islamiya intends to present a plan for organizing vigilante justice committees to the Shura Council within a few days, said on Thursday Khaled al-Iskandarany, spokesperson for the group’s Construction and Development Party. The committees would be under the supervision of the National Security Council, the Interior Ministry, the Defense Ministry and the president, ensuring that the citizen justice bodies could not start imposing their own rule of law, Iskandarany assured. Each committee would include an armed member of the police force, or be in direct contact with the nearest police station, the spokesperson said. The Jama’a has also announced its readiness to defend Muslim Brotherhood offices in anticipation of protests today. [Egypt Independent, Shorouk (Arabic), 3/21/2013]

Lynch mob kills man in Egypt’s Nile Delta
Villagers in Egypt‘s Nile Delta killed a man suspected of trying to steal a car Thursday in the country’s latest incident of vigilante violence, dragging him half-naked and bloody as they kicked and hit him with sticks and fists before tying him to a tree to bleed to death, witnesses and officials said. At one point in the attack, the bleeding man trembled on the ground, pleading, “Take me to a hospital,” according to video of the attack obtained by The Associated Press from a person at the scene in the village. A security official said villagers caught the unidentified man trying to steal a car at gunpoint. But one villager who participated in the attack said the man was roaming at street where cars were parked at dawn when residents descended on him and started beating him up, believing he intended to steal a car. [Ahram Online, AP, 3/21/2013]

Activists, Brotherhood youth scuffle in Moqattam, interior ministry calls for self-restraint
Egypt’s Muslim Brotherhood said it would defend its headquarters against protesters if necessary, raising the possibility of a confrontation at a demonstration planned in Cairo on Friday. Around 12 central security forces vehicles and four armoured vehicles were deployed behind the headquarters while officers from Cairo’s security directory took positions opposite the building. The Ministry of Interior said protesters should practice self-restraint to not further increase instability and violence in Egypt, a day before planned Friday protests by opposition activists and groups at the Muslim Brotherhood’s headquarters in Moqattam district of Cairo. Youths of the National Salvation Front clashed with Brotherhood supporters in demonstrations touted as "Friday of Restoring Dignity" at the Muslim Brotherhood headquarters in Cairo’s Mokattam. Moqattam residents have reportedly formed popular committees, such as those assembled during the 18 days of January 2011 in the absence of security forces, to prevent dozens of buses transporting members of the Muslim Brotherhood from entering the area. Al-Masry Al-Youm reported that residents of nearby buildings were coming to the defense of the protesters, throwing stones at Brotherhood members. [Reuters, Aswat Masriya, Egypt Independent, , EGYNews (Arabic), Asharq al-Awsat (Arabic), Watan (Arabic), AMAY (Arabic), 3/22/2013]

Brotherhood defeated in student union elections nationwide
With the majority of student union elections concluded at universities around the country, liberals and independents have come out on top, winning 66 percent of the seats in 21 public universities, while Muslim Brotherhood candidates won only 34 percent. Elections are yet to be held at Port Said University. The General Union of Egypt’s Students (GUES) is now set to be formed within a month. Forty-eight students will sit on the council as the heads and deputy heads of the student unions of a total of 22 public universities. Six additional seats would be allocated to students representing Al-Azhar University and select private universities. This year’s results contrast strongly with last year, when Muslim Brotherhood students swept the unions of 12 public universities. [Egypt Independent, 3/21/2013]

EU Embassy denies rumors of cutting off Egypt aid
The European Union Embassy in Cairo denied reports on Thursday that the EU was threatening to cut off aid to Egypt. The embassy claimed that the media misinterpreted statements by Stefan Fuele, the EU’s commissioner for development and growth. In a report on reforms in Eastern Europe, the Middle East and North Africa, the European Commission listed "serious setbacks" in Egypt in areas such as human rights, and criticized President Mohamed Morsi for pushing through constitutional changes that plunged the country into "a deeply divisive political crisis." Failure to address EU concerns could result in cutbacks in aid for Morsi’s cash-strapped government, Reuters quoted Stefan Fuele as saying in a news conference. The embassy said Fuele was talking specifically about extra money earmarked for democratic reforms, not about aid in general. [Egypt Independent, Asharq al-Awsat (Arabic), 3/22/2013]

Hamas appeals to Egypt on fishing, promises security cooperation
Hamas complained to Egypt on Friday after Israel suspended part of a Cairo-brokered truce agreement by halving Palestinian access to fishing waters in response to a rocket attack from the Gaza Strip. Thursday’s salvo at the Israeli border town of Sderot, which caused no casualties, coincided with a visit to Israel and the Israeli-occupied West Bank by U.S. President Barack Obama. Israel, which holds Hamas responsible for any violence emanating from the enclave, retaliated by shutting the Kerem Shalom commercial crossing on the Gaza border and by enforcing a newly restricted 5 km (3 mile) wide fishing zone. [Aswat Masriya, AMAY (Arabic), 3/22/2013]