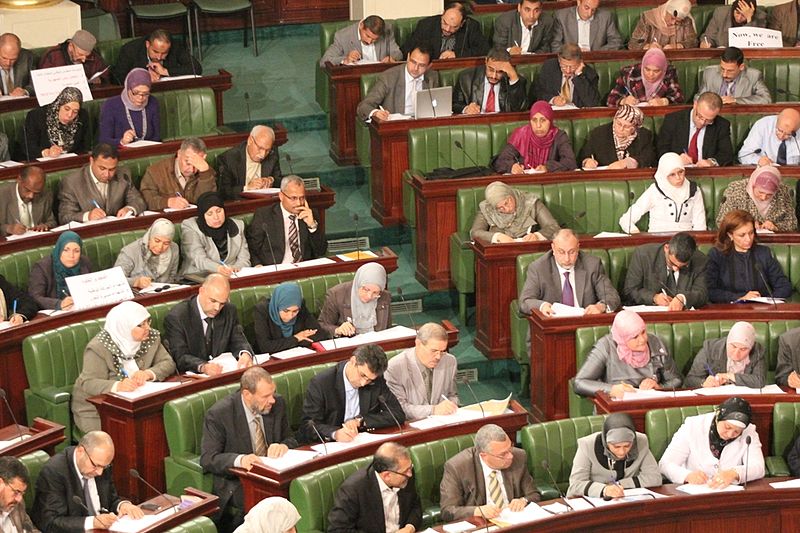 After more than eighteen months of debate, a new constitution is inching toward ratification in Tunisia. The most recent draft, produced on June 1, will be debated by the National Constituent Assembly beginning this week.

Morsi addresses nation, marking his first year in power
Addressing the country in a televised speech, President Mohamed Morsi said demonstrations and sit ins are rights guaranteed by the constitution, according to the State Information Service. He further added that dialogue with the opposition is open, hailing the role of the opposition in defending the country’s interests. The President announced that he has decided to appoint a higher committee for national reconciliation and a committee representing all political factions to amend the constitution. [State Information Service, 6/27/2013]

Egypt’s opposition criticizes president’s speech
A prominent opposition leader has criticized Egypt’s president for not offering a detailed road map for national reconciliation, saying his offer for a dialogue was a repeat of earlier proposals that never panned out. In a statement issued Thursday, former foreign minister Amr Moussa also criticized President Mohamed Morsi for not offering a "clear" economic recovery plan and blaming the nation’s woes on street protests and strikes. [AP, 6/27/2013]

Death toll from Libyan clashes rises to five, ninety-seven wounded
Five people were killed and nearly one hundred were wounded in clashes between rival armed militias in Libya’s capital on Wednesday, Health Minister Nurideen Doghman said. Loud explosions and gunfire rocked Tripoli late into the night for a second day, highlighting the rivalries between heavily armed groups that have plagued the country since the fall of Qaddafi. The fighting in Tripoli started on Tuesday morning when a militia given the job of guarding a major oil field attacked the headquarters of the national force set up to guard oil facilities across the country. [Reuters, 6/27/13]

Senior officer murdered in Benghazi
A military intelligence colonel serving in Benghazi was killed by a car bomb this morning. Colonel Jumaa Musrati’s death is only the latest in a succession of murders of military personnel since the revolution. Some suspect that figures from the Qaddafi regime have been the target of the killings; while others believe the killers are former regime supporters seeking retribution. Meanwhile, three car bombs targeting a commercial district in the southern Libyan city of Sebha left two dead and eighteen injured. [Libya Herald, 6/26/13]

Failed candidate for GNC president resigns from his seat
General National Congress (GNC) member from Benghazi, Abdel Moneim Louhichi, resigned yesterday shortly after the nomination of the new GNC president, Nuri Abu Sahmain. Louhichi told the Libyan news agency LANA that he had resigned in protest at the "poor performance of the GNC and its lack of objectivity and transparency." He also accused the Congress of "partisanship, with regional and tribal considerations." [Libya Herald, 6/26/13]

Transferring subsidized goods into cash will reduce smuggling
Libya is currently looking to remove subsidies on basic food items and fuel in return for cash support for citizens by the end of August this year. The proposed phasing out of subsidies could save Libya more than LD 3 billion a year, according to the chairman of the General National Congress (GNC) Finance Committee. The congressman said that an informal study has shown that around a third of Libya’s subsidized food items and fuel is being smuggled into neighboring countries. [Libya Herald, 6/26/13]

United Nations chemical weapons team in Turkey to investigate Syria claims
United Nations (UN) appointed inspectors, blocked from entering Syria, are in Turkey to gather information about possible use of chemical weapons in the civil war, officials said on Thursday. From Turkey, the team will be unable to gather soil samples or scientific evidence needed to prove chemical use, but could compile intelligence and interviews or take blood samples from witnesses or victims of alleged attacks. [Al Arabiya/Reuters, 6/27/2013]

Syrian rebels lose border town
Syrian President Bashar al-Assad’s forces have retaken the Lebanese border town of Tel Kalakh, driving out rebels and ending an unofficial truce under which it had allowed a small opposition presence to remain for several months. The fall of Tel Kalakh marks another gain for Assad after the capture of the rebel stronghold of Qusayr this month, and consolidates his control around the central city of Homs, which links Damascus to his Alawite heartland overlooking the Mediterranean coast. [Reuters, 6/26/2013]

New Syrian radio to have neutral voice
Syrian journalists backed by France launched a Paris-based radio station Wednesday that will broadcast deep into Syria, aiming to provide what they said would be independent coverage of the civil war and counter the propaganda war being waged by the Syrian government and the rebels. Five Syrian journalists, including three who have left Syrian state media, will broadcast and coordinate Rozana’s coverage with thirty correspondents based across Syria. [Daily Star/Reuters,6/27/2013]

Adoption of Tunisia’s constitution edges closer
After more than eighteen months of debate, a new constitution is inching toward ratification in Tunisia. The most recent draft, produced on June 1, will be debated by the National Constituent Assembly beginning this week. Optimists within the transitional authority tasked with producing the document said it could be adopted as early as August with elections following a few months after. [The National, 6/27/2013]

Court releases three Europeans jailed for topless feminist protest
A Tunisian court on Wednesday decided to release three European feminist activists who staged a topless protest in Tunis last month against the Islamist-led government. The release of the three women—one German and two French members of the women’s rights group Femen—could ease the anger of the European Union, Tunisia’s main economic ally. The three apologized and promised not to repeat the protest. [Al-Jazeera, Reuters, AFP, 6/27/2013].

Government considers abolishing information ministry
The government may abolish the Ministry of Information as part of an anticorruption bill that parliament is debating. The move will make way for an independent, national authority, which will be tasked with providing a better atmosphere for freedom of expression, officials at a press conference said. Abdul Ma’az Dabwan, head of the Parliament Anti-Corruption Organization, said the bill mainly included the cancellation of the information ministry, substituting it with an independent authority similar to the Supreme National Anti-Corruption Authority, whose members are elected by parliament. [Yemen Times, 6/27/2013]

Tribesmen launch new attack on key oil pipeline
Yemeni tribesmen launched a fresh attack on a key pipeline overnight, interrupting the flow of oil and forcing troops to deploy as technicians were blocked from repairing the installation, officials saidThursday. The attack in the Sarwah area of Marib province, 170 kilometers (105 miles) east of the capital Sanaa, was the second time the pipeline has been targeted in less than a fortnight. An official said armed members of tribes also cut off the road leading to the damaged pipeline to prevent technical teams from reaching the site and carrying out repair works. [Daily Star/AFP, 6/27/2013]

Yemen, Qatar sign an agreement to establish $4.3 million dialysis center
Yemen and Qatar signed on Wednesday an agreement to establish the Sheikh Tamim bin Khalifa’s Dialysis Center in Lahj governorate. The center will be built on an area of 1000 square meters with an operation capacity up to 500 dialysis cases per month at a total cost of $4.3 million funded by the Qatar Red Crescent. [Saba, 6/26/2013]

Poll shows Hezbollah losing support among Palestinians
A survey conducted by the Pew Research Center published this month shows a significant decrease in Hezbollah’s popularity in the Arab region following the Lebanese militant group’s intervention in Syria in support of Bashar al-Assad’s regime. According to the survey, 43 percent viewed the militant group "favorably" in 2013, down from 61 percent in 2011. [Al-Monitor, 6/26/2013]

New Qatari emir makes no mention of Syria, focuses on domestic affairs in first speech
In a speech largely focused on domestic affairs, the new emir of Qatar, Sheikh Tamim bin Hamad al-Thani, said he would continue his father’s reform agenda and growth projects and insisted that Qatar would avoid sectarianism and respect all religions as religious divisions would prevent modernization and development. [Middle East Online, 6/26/2013]