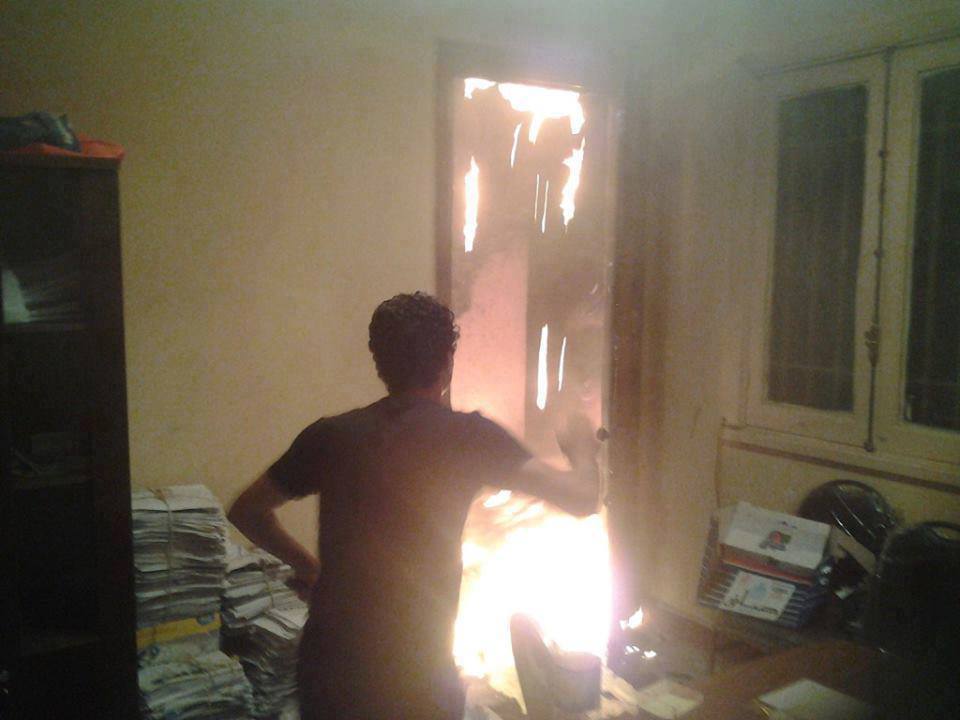 Egypt president says early election calls ‘absurd‘
Egypt’s President Mohamed Morsi rejected as "absurd" opposition calls for an early election less than a year into his term of office, charging in comments published Friday that such calls violated the constitution. In a four-page interview with the state-run al-Ahram daily ahead of the anniversary, Morsi said demands for an early presidential vote are both "absurd and illegal." He also warned against violence during upcoming demonstrations, which the opposition plans for the anniversary to demand his ouster. Meanwhile, the Cairo-based International Development Centre issued a ‘Democracy Index’ in early June assessing the Egyptian presidency’s performance throughout the month of May, highlighting the latter’s "failure" to manage crises. According to the report, the presidential budget saw a LE78 million increase since the 2011 ouster of former president Hosni Mubarak. [AFP/Ahram Online, AP, 6/7/2013]

Cracks show in opposition bloc after Moussa’s Brotherhood meeting
A Wednesday meeting between leading strategist of the Muslim Brotherhood Khairat El-Shater and opposition leader Amr Moussa has put the latter under fire. The dinner meeting was mediated by Ayman Nour, founder of the liberal Ghad al-Thawra party, and took place at his house. Saad al-Katatni, head of the Muslim Brotherhood’s Freedom and Justice Party (FJP), was also invited but did not attend. While critics say Moussa’s move stands in startling contrast to the NSF’s staunch opposition to the Islamist group, Moussa described the gathering as a "social, personal meeting that was under no commission from anybody." Analysts say Moussa’s action might create a rift between members of the already under-fire NSF. [Ahram Online, Aswat Masriya, 6/6/2013]

Salafist, Brotherhood differences ‘undeniable’: Egypt’s al-Borhami
Ongoing differences between Egyptian Salafist parties and the Muslim Brotherhood "cannot be denied," Yasser al-Borhami, deputy head of the ultra-conservative Salafist Call, said on Thursday. Speaking to the press during a visit to Gaza, al-Borhami added that, despite these differences, Salafist groups would "not allow the state to collapse," Egyptian state news agency MENA reported. The Salafist Call’s differences with the Muslim Brotherhood are concerned mainly with the issue of the implementation in Egypt of Islamic Law. While in Gaza, al-Borhami, at the head of a delegation of figures from the Salafist Call, met with Ismail Haniya, prime minister of Gaza’s Hamas-led government. [Ahram Online, 6/6/2013]

Egypt to sign $4.8 bn IMF loan by month’s end: Planning minister
Egypt will sign a long-awaited $4.8 billion loan deal with the International Monetary Fund (IMF) by the end of this month, state news agency MENA reported on Thursday, citing the minister of planning and international cooperation. Recently-appointed Planning Minister Amr Darrag told MENA that contacts between the government and the IMF were "ongoing." He added that Egypt’s economic reform program aimed to reduce the country’s budget deficit to 9.5 percent of GDP in the upcoming 2013/14 fiscal year. Meanwhile, the IMF said it was making good progress in negotiations with Egyptian officials on a $4.8 billion loan Egypt seeks. The fund said it was looking forward to solving some technical issues that will lead to the successful conclusion of ongoing negotiations. "We’re making good progress in our technical discussions with the Egyptian authorities, and we look forward to the resolution of the remaining technical issues," the Middle East News Agency reported the IMF’s communications department director as saying. This would enable us to conclude the negotiations successfully, director Gerry Rice said. [Ahram Online, Aswat Masriya, 6/7/2013]

Haddad: Egypt will not resort to military force to resolve the Nile crisis
Presidential advisor for Foreign Affairs, Essam al-Haddad has said that Egypt will not resort to military force as an option for resolving the Renaissance Dam crisis with Ethiopia. In a statement published on his Facebook page, al-Haddad said that Ethiopia is an important country, one with influence in Africa, and Egypt must adopt a new approach to rebuild relations with the country. He also revealed that Egypt will is keen on dialogue and reciprocal presidential visits. [EGYNews (Arabic), 6/7/2013]

Anti-Morsi petition Rebel Campaign office set on fire; Campaign sues Morsi for incitement
Unknown assailants set on fire the anti-Morsi Tamarod (Rebel) Campaign headquarters in Cairo’s downtown district in the early hours of Friday, al-Ahram Arabic news website reports. Assailants threw Molotov cocktails at the office, the group posted on its official Facebook page immediately after the attack. Campaign spokesman Hassan Shahin was injured in the fire, the campaign wrote on its Facebook page. Organizers said the group has received threats of physical harm from Islamist presidential supporters in recent days. Several campaign members filed a formal complaint against President Mohamed Morsi, Muslim Brotherhood leaders Mohamed Badei and Khairat al-Shater, the Freedom and Justice Party head Saad al-Katatni, Islamic Jama’a member Assem Abdel Maged, and Muslim Brotherhood member Ahmed al-Moghir. They have also announced that they have no intention of backing down from their call for early presidential elections. Political forces condemned the attack on the ‘Rebel’ headquarters, among them supporters of the campaign including the opposition group, the National Salvation Front (NSF) and NSF members the Dostour Party (an NSF member) and Amr Moussa. Islamist parties who do not support the ‘Rebel’ campaign, among them the Salafist Nour Party and the Change and Development party also condemned the attack.  Protesters flocked to a district in downtown Cairo after the headquarters of Tamarod, a campaign against Egyptian President Mohamed Morsi, was set on fire early on Friday. Clashes between Tamarod and Brotherhood supporters in Damanhour also left 22 injured. Before their headquarters were set on fire, organizers of the campaign said they rejected an invitation to meet with Interior Minister Mohamed Ibrahim regarding planned 30 June anti-government demonstrations. [Ahram Online, Aswat Masriya, Arabiya, EGYNews (Arabic), Shorouk (Arabic), 6/7/2013]

Jailed Egyptian blogger Douma declares hunger strike: Lawyer
A prominent Egyptian activist has begun a hunger strike in protest at his detention and to raise awareness of what activists say is a widening crackdown on dissent by President Mohamed Morsi and his Islamist-led government. Ahmed Douma was sentenced this week to six months in jail for calling Morsi a criminal and a murderer in media interviews. He has been in detention since his arrest in April. After the sentencing he was meant to leave prison on bail pending an appeal, but was kept behind bars and charged again, this time with inciting violence. "An example is being made of Douma," Douma’s lawyer Ali Soliman told Reuters on Thursday. He said the blogger began refusing food on Wednesday. [Reuters, 6/6/2013]

US quietly allows military aid to Egypt despite rights concerns
Secretary of State John Kerry quietly acted last month to give Egypt $1.3 billion in US military aid, deciding that this was in the national interest despite Egypt’s failure to meet democracy standards. Despite stating in a May 9 memo that "we are not satisfied with the extent of Egypt’s progress and are pressing for a more inclusive democratic process and the strengthening of key democratic institutions," Kerry said the aid should go forward. According to the memo, the US national interests served by the aid include increasing security in the Sinai, helping prevent attacks from Gaza into Israel, countering terrorism and securing transit through the Suez Canal. [Reuters, SIS, Shorouk (Arabic), 6/6/2013]

Ethiopia to press ahead with Blue Nile dam: official
Ethiopia will press ahead with the construction of its Grand Renaissance Dam on the Blue Nile River, officials said Thursday, the day after Egypt warned "all options are open" if its water supply is affected. "We are going to continue with our project, I don’t think it will depend on the will of politicians in Egypt," said Getachew Reda, spokesman for Ethiopian Prime Minister Hailemariam Desalegn. Getachew stood by the report and said "spin masters" should not selectively accept and reject the report’s findings. "It is not for Egypt to select the part of the findings they agree with and the part they don’t agree with," he told AFP. Meanwhile, in an interview with state daily al-Ahram published late Thursday evening, Egyptian President Mohamed Morsi said that, while Egypt had a "keen interest" in maintaining friendly relations with African states – especially Sudan and Ethiopia – it was also keen not to risk losing a "single drop of Nile water." [AFP/DNE, 6/6/2013]

UN and EU respond to NGO trial verdict
In a statement on Thursday, UN Secretary-General Ban Ki-moon expressed his concern over the conviction and sentencing of a number of local and foreign employees of international NGOs, saying it is a sign of an increasingly restrictive environment for civil society in the country. Rupert Colville, spokesman for the UN High Commissioner for Human Rights, Navi Pillay condemned the NGO trial verdict, adding that the office of the High Commissioner will continue to follow developments on the issue closely. The spokesman pointed out that the Office of the High Commissioner will continue to follow developments closely to the issue in the coming period. Michael Mann, EU foreign policy spokesman said that “real democratic dialogue and elections in accordance with international standards,” were the conditions laid ahead of Egypt for receiving 5bn Euro in aid. Mann added that the EU acknowledges that democratic transition in Egypt is facing difficulties. “We don’t want to lecture Egypt; we want to help Egypt draft NGO laws and encourage dialogue between parties but whenever journalists are arrested we will condemn it; that doesn’t mean our stances have changed” he said. [UN Radio, DNE, EGYNews (Arabic), Shorouk (Arabic), 6/7/2013]

Also of Interest:
Egypt: Time to address violence against women in all its forms | Amnesty