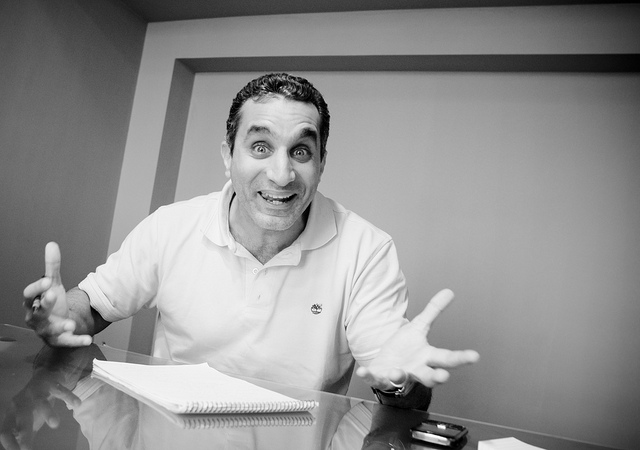 TV host and prominent political satirist Bassem Youssef has been released on LE15,000 ($2,200) bail after reporting to the Public Prosecution’s office. Youssef faces charges of insulting the president, contempt for Islam and publishing false news.

Human Rights Watch is interfering in Egypt’s affairs: Shura Council
Human Rights Committee Secretary Ezzeddin al-Komi of the Shura Council condemned on Friday a recent Human Rights Watch (HRW) report on Egypt’s proposed Law on the Protection of the Right to Peacefully Demonstrate in Public Places. The HRW report published last month argues the law would, "severely limit the right to peaceful public assembly and is open to abuse by police." Komi called on the organization to pay attention to its duties in rejecting human rights violations in the occupied territories in Palestine against civilians. [Ahram Online, Egypt Independent, 3/30/2013]

Shura Council committee discusses second version NGO draft law
The Shura Council’s Committee for Human Development and Local Administration discussed the controversial draft law regulating civil society organisations on Sunday. The discussion comes on the same day that the Egyptian Organisation for Human Rights (EOHR) sent a set of observations regarding the bill to Ahmed Fahmy, the head of the Shura Council. The EOHR said the cabinet’s draft of the bill defines civil work as humanitarian and developmental work but does not include work related to human rights “which is considered one of the basic goals of civil work”, the statement said. [DNE, 3/31/2013]

Shura Council moves to allow religious slogans in campaigns
The Shura Council legislative committee on Sunday removed an article from the draft electoral law that banned the use of religious slogans in election campaigns. The amended draft law is to be submitted to the council Monday for review. The removed article, Article 61 of the political rights draft law, which the Cabinet submitted to the council, stipulated a punishment of imprisonment for no less than three months, as well as a fine of no less than LE5,000 and no more than LE10,000, for using religious slogans in campaigning. [Egypt Independent, 3/31/2013]

Bassem Youssef questioned for insulting Morsi, released on LE15,000 bail
TV host and prominent political satirist Bassem Youssef has been released on LE15,000 ($2,200) bail after reporting to the Public Prosecution’s office. Youssef faces charges of insulting the president, contempt for Islam and publishing false news. He added on Twitter that he faces a fourth, as of yet unspecified charge. Sources also said that the investigating judge also ordered Youssef to have his Twitter account administrator to stop tweeting about the investigation and erase the tweets that had been published. The Egyptian National Association for Change (NAC) released a statement on Saturday denouncing Youssef’s arrest.  The weekly television episode of Youssef’s show will be broadcast at its usual time on Friday evening despite the charges, according to Youssef’s lawyer Hossam al-Sanhouri. [Ahram Online, DNE, Reuters, Egypt Independent, AP, 3/31/2013]

Egypt’s prosecutor-general to appeal verdict removing him from post
Egypt’s prosecutor-general Talaat Abdallah is currently preparing an appeal against the court verdict to dismiss him from his position last week, said State Security Attorney-General Hisham al-Qarmooty Saturday. Additionally, Egypt’s presidency will not reconsider the decision to appoint Talaat Abdullah as prosecutor-general, despite a court verdict overruling his appointment, a source from the presidential office told Ahram’s Arabic news website Sunday. The Human Rights Committee of the Lawyers’ Syndicate condemned the court verdict overturning President Mohamed Morsi’s decision to dismiss Mahmoud and appoint Abdallah in his place. Meanwhile, the Press Syndicate council announced it has decided “not to deal with the current Prosecutor General”, ordering its members not to appear in front of him, “out of respect for judicial rulings.” Justice Minister Ahmed Mekky said that he advised President Mohamed Morsi not to remove Abdel Meguid Mahmoud as prosecutor general, and that the recent court ruling overturning Mahmoud’s removal would be enforceable if it is upheld by the Court of Cassation. [Ahram Online, Reuters, DNE, Egypt Independent, SIS, 3/30/2013]

Port Said football disaster was premeditated: Egyptian court
The Port Said Criminal Court on Saturday asserted that Egypt’s worst-ever football disaster was not a spontaneous incident, holding supporters of Port Said football club Masry responsible for killing scores of rival fans on 1 February 2012. The statement comes after a media ban was imposed Saturday by Judge Abdel-Aziz Shahin on covering ongoing investigations into violence that took place in January in Egypt’s city of Port Said. The decision was taken to ensure the integrity of the investigations, according to Shahin who is commissioned by the justice ministry to head the investigations. [Ahram Online, 3/31/2013]

Egyptian households see energy prices increase
In its quest to rein in a growing budget deficit, the Egyptian government has turned to its extensive subsidy bill to find savings. The government has already announced plans to ration subsidies for petrol and diesel fuel, and hiked fuel prices for heavy industry by 33 percent at the beginning of the year. However, it seems that the government has recently moved to reduce subsidies on electricity and natural gas, which make up a meagre 5 percent of Egypt’s LE145 billion subsidy bill. The government is considering three ways to identify allocations for fuel subsidies in the new fiscal year 2013/14, which starts in July, Petroleum Minister Osama Kamal said. “The first scenario [entails] allocating LE99 billion to subsidize fuel, if the government applies the smartcard system to distribute diesel oil, gasoline and butane gas starting in July, as announced,” Kamal said. [Ahram Online, Egypt Independent, 3/31/2013]

IMF team to arrive in Egypt on Wednesday for loan talks
Cabinet spokesperson Alaa al-Hadidy said the International Monetary Fund delegation will arrive in Cairo on Wednesday to resume negotiations that started in November for a US$4.8 billion loan. Hadidy told reporters on Sunday that negotiations will not include discussions on emergency loans. A government source has also said that there are loans that Egypt can obtain from the World Bank, the European Union, and the African Development Bank, but that first the country needs final approval of the IMF loan and for Egypt to gain the trust of donors. [Reuters, Egypt Independent, 3/31/2013]

President Morsi refers Islamic bonds law to Egypt’s al-Azhar
President Mohamed Morsi on Sunday referred a controversial draft law on Islamic bonds – or sukuk – to al-Azhar’s Senior Scholars Authority, according to Egyptian state television. In late February, al-Azhar, Egypt’s leading Islamic religious authority, said its clerics must be consulted on the proposed law, which would allow the government to issue Islamic bonds. Al-Azhar’s statement set it at odds with the Muslim Brotherhood, which drove the legislation through the Shura Council (the upper house of Egypt’s parliament, currently endowed with legislative powers) on 19 March. [Ahram Online, Reuters, SIS, 3/31/2013]

Police refuse to file 6 April report against Interior Minister
Members of the 6 April Youth Movement, led by Ahmed Maher, attempted to file a police report in Nasr city on Friday against Minister of Interior Mohamed Ibrahim, but the police refused to file the report. Mohamed Adel, a spokesperson for the movement said that members of his group tried to file a police report following a protest by the group outside Ibrahim’s house early on Friday morning. The protest was violently dispersed by the police, reported Adel, and four members were arrested. On Sunday, dozens of April 6 members gathered at the High Court in Cairo on Sunday morning to call for the release of detained activists and the removal of Prosecutor-General Talaat Abdullah who "lacks legitimacy." [DNE, 3/29/2013]

Egypt reopens Alexandria airport after runway protest
Borg al-Arab International Airport in Alexandria reopened Sunday after police strikes forced it to shut down.  Magdy Shaklol, head of a civil aviation association in Alexandria, said negotiations with striking police officers succeeded, and the airport reopened. He told state news agency MENA that flight traffic is returning to normal, and said a flight from Beirut would arrive in half an hour. Before the strike was suspended, the airport sustained significant damage at the hands of roughly 250 low-ranking policemen demanding salary increases. [Reuters, Egypt Independent, Ahram Online, 3/31/2013]

Armed militants demonstrate through North Sinai towns
Militants belonging to various extremist religious groups paraded the streets of two North Sinai towns Sunday, driving SUVs and carrying automatic weapons, security sources said. The sources said the militants demonstrated in Rafah and Sheikh Zuwayed, both on the border with Israel, in a region demilitarized by the peace treaty between Egypt and Israel. [Egypt Independent, 3/31/2013]

Also of Interest:
Sinai family engages in sit-in over revocation of their citizenship | DNE

Islamists weigh in on media in ministry-sponsored seminar
Salafi political leaders and figures stressed the importance of a media code of ethics in the ‘Future of Media’ seminar held by the Ministry of Information. Disqualified presidential candidate Hazem Salah Abu Ismail, al-Jama’a al-Islamiya leader Assem Abdel Maged, and television preacher Khaled Abdallah all attended the seminar. Jama’a al-Islamiya and its political wing, the Construction and Development party, proposed establishing new satellite channels and newspapers to counter what they claim is an “anti-Islamist media.” The media outlets would be financed by Islamist businessmen and would be a collaboration between Muslim Brotherhood members and other hardline Islamist parties, said Khaled al-Sherif, Construction and Development Party spokesperson. [DNE, Egypt Independent, 3/31/2013]

White House condemns assaults on women at Egyptian demonstrations
The White House on Friday condemned the rape and assault of women at recent demonstrations in Egypt and called on the Cairo government to prevent sexual violence and prosecute those responsible. White House deputy press secretary Josh Earnest told reporters that the United States is deeply concerned at reports of rapes and sexual assaults in public squares in Egypt. He added the Egyptian government has a responsibility to take legal measures to prevent sexual violence and to prosecute people who are involved in such crimes.
[Reuters/Ahram Online, 3/29/2013]

Switzerland drafts bill to return smuggled assets
Kamel Guirguis, head of the Public Prosecution’s international cooperation office, has said that Swiss authorities have finalized the first draft law facilitating procedures to restore smuggled assets back to their original owners. Guirguis added Saturday that the draft law was not issued for specific countries, but that its mechanisms would allow Egypt to restore assets smuggled abroad during Hosni Mubarak’s rule. [Egypt Independent, 3/30/2013]