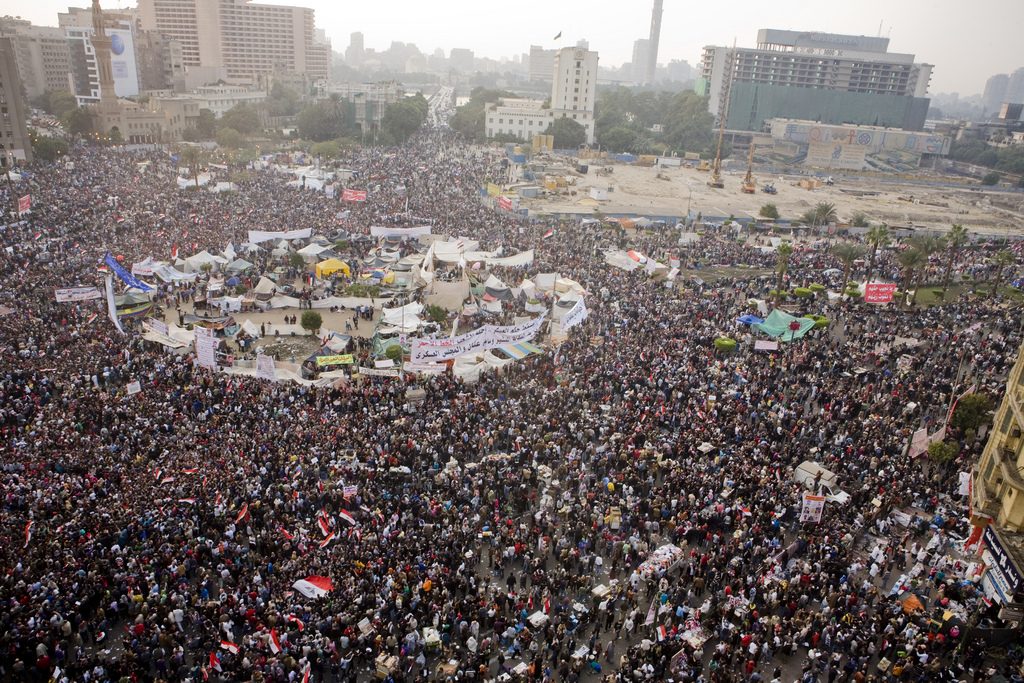 Egypt’s highest appeals court has upheld the acquittal of 24 loyalists of ousted President Hosni Mubarak tried for organizing the ‘Battle of the Camel,’ an attack on protesters that was a pivotal moment in the country’s 2011 uprising.

Morsi: Cabinet reshuffle brings ‘new blood’
President Mohamed Morsi held a meeting with Egypt’s cabinet at the presidential palace following Tuesday morning’s reshuffle and the swearing in of the nine new members, where he said that the new formation presents a promising step forward. The president said that the new cabinet is "an attempt to bring new blood into the government." Meanwhile, Prime Minister Hisham Qandil said that the new government would give a more "promising performance" and would serve to ensure greater "political stability." He said that only nine ministers had been changed since two of those initially slated for dismissal had been judged to be fit and were leading projects that remained unfinished. Commenting on the ministerial reshuffle, Muslim Brotherhood spokesman Ahmed Aref said it will be assessed and held accountable by the Egyptian people. He also called on the current cabinet to not take “long-term strategic decisions” on its own. [Ahram Online, SIS, 5/7/2013]

Interviews with ministers
Ahmed al-Gizawi, the newly-appointed minister of agriculture, said that the wheat issue will be one of the ministry’s top priorities during the coming phase, the state news agency MENA reported on Tuesday. Developing grain production will also be part of the ministry’s priorities in order to close the food gap, the minister said. Judge Ahmed Suleiman, the new minister of justice, told al-Masry al-Youm that  he will seek to streamline litigation procedures for citizens, modeling it after the Turkish system. Dr. Fayyad Abdel Moneim, the new finance minister, said that the most important priority for the ministry is to adopt the budget bill for the fiscal year (2013/2014), complete a package of amendments to the tax laws, implement the maximum wage policy, and complete consultations with the International Monetary Fund regarding economic and social reform. [Aswat Masriya, AMAY (Arabic), AMAY (Arabic), 5/8/2013]

President to oversee government think tank
Egypt’s Information and Decision Support Centre (IDSC) will now be under presidential and cabinet supervision, having previously been overseen only by the cabinet, according to an IDSC statement regarding a draft bill on the procedure. The bill will be sent to the presidency for approval. IDSC is one of Egypt’s most prominent think tanks. Previously overseen entirely by the Cabinet, the body was tasked with supporting decision-makers on a number of economic, social and political issues. Speaking about the change, Emad Mohamed, the media relations officer at the IDSC, said “It is for the purpose of more transparency, accuracy and objectivity, as IDSC has been an entity under the control of the government, but after this decision it will be an independent entity.” Human rights lawyer at the Egyptian Centre for Economic and Social Rights (ECESR) Malek Adly, however, called it a “brazen” act, adding that the move means that not all data will be made available to the public. [DNE, 5/7/2013]

Battle of the Camel acquittals upheld by Egyptian court
Egypt’s highest appeals court has upheld the acquittal of 24 loyalists of ousted President Hosni Mubarak tried for organizing the ‘Battle of the Camel,’ an attack on protesters that was a pivotal moment in the country’s 2011 uprising. On 10 October, a Cairo criminal court acquitted all 25 defendants who were charged with offences related to the incident on 2 February 2011, known as the ‘Battle of the Camel.’ The court did not immediately release its reasoning for the appeal refusal. [Ahram Online, Aswat Masriya, AP, AJE, Ahram (Arabic), Shorouk (Arabic), 5/8/2013]

Detention of Egypt’s Mubarak renewed
Egypt’s Illicit Gains Authority (IGA) has ordered the detention of former president Hosni Mubarak for a further 15 days over graft charges. On Wednesday, an IGA committee resumed its questioning of Mubarak at Tora Prison where he has been held since mid-April following a spell in Maadi Military Hospital. On 24 April, the IGA ordered the detention of Mubarak for an additional 15-day period pending further investigations into graft charges. Mubarak unsuccessfully appealed against the decision. [Ahram Online, Aswat Masriya, 5/8/2013]

Court rejects electoral procedure challenge
The Administrative Court for the State Council rejected a lawsuit on Tuesday that demanded a thorough review of the electoral register, the use of an electronic vote-counting system and replacing the use of a fingerprint to cast a vote. Judge Sami Darwish, vice-president of the State Council rejected the lawsuit that called for removing the names of people who died, policemen and soldiers from the electoral register. Ghada Shahbender of the Egyptian Organization for Human Rights (EOHR) said she was disappointed by the verdict, adding it is an “indication that this is not a transparent system”. [DNE, 5/7/2013]

Egypt govt reshuffle sends negative message to IMF: Economists –
Tuesday’s partial cabinet reshuffle included the replacement of four economic ministers, three of whom are involved in Egypt’s ongoing talks with the International Monetary Fund for a proposed $4.8 billion loan. Cabinet spokesman Alaa al-Hadidy said the ministerial changes would "not affect" the course of Egypt’s loan talks with the IMF. Amr Darrag, new minister of planning and international cooperation assured the public that talks were ongoing. Economists, however, are likely to see things differently. Many of them believe the reshuffle – the second cabinet change within five months – will send a negative message to the IMF and potential investors. [Ahram Online, EGYNews (Arabic), 5/7/2013]

US turns down Egypt’s request for $550 million aid in cash
The United States government has rejected Egypt’s request for aid worth $550 million in cash and insisted to give the country the value of this aid in the form of advanced scholarships in technical fields. A source at the Ministry of Planning and International Cooperation revealed that the US has promised to grant Egypt aid worth $1 billion; of which $190 million are secured, $260 million are hinged on securing the long-awaited loan from the IMF and $550 million will be given in the form of scholarships after US rejected to give this value to Egypt in cash. [Amwal Al Ghad, 5/8/2013]

E-Finance to operate new electronic petroleum subsidies program
Egypt’s cabinet recently decided to activate and support a new electronic payment system for gasoline and petroleum products, awarding the rights to implement the project to the electronic payment company e-Finance for a period of three years. Egypt’s Finance Ministry estimated that a total of EGP 3bn will be saved monthly through implementation of the new program. The government agreed to accept e-Finance’s bid to implement the project, set to last up to three years at a cost of EGP 12.8m a month. [DNE, 5/7/2013]

Egyptian foreign reserves up for first time in 5 months
Egypt’s Net International Reserves (NIR) grew by around $1 billion in April, registering the first increase since October of last year, due to Libyan cash deposits at the Central Bank of Egypt (CBE). Total NIR reached $14.42 billion by the end of April 2013, up from $13.4 billion at the end of the previous month. [Ahram Online, AMAY (Arabic), 5/8/2013]

Police ‘inactive’ in stopping sexual harassment during Sham al-Nessim
Police were “lazy” and slow to react to incidents of verbal sexual harassment throughout the Sham al-Nessim holiday, the ‘I Saw Harassment’ initiative said in an official report on Monday. Despite the lack of police action the initiative did not note any major issues of “sexual harassment” throughout the day. The report came as a result of a campaign that the initiative organized along the Nile Corniche from noon to 7.30pm on Monday to monitor incidents of sexual harassment, conduct surveys, and provide support for women and girls who had been harassed. Meanwhile, Dr. Omayma Kamel, a presidential advisor, said that they are anticipating figures from the Ministry of Interior documenting the prevalence of harassment. She also claimed that figures published by research centers were exaggerated. [DNE, AMAY (Arabic), Ahram (Arabic), 5/7/2013]

Faculty members in solidarity with professor questioned over insulting religion
A number of faculty members announced on Tuesday their solidarity with an Egyptian professor who was questioned over allegations of insulting religion and prevented from teaching. The faculty members rejected the notion of pressing charges of "contempt of religion" in the academic field, as it represents an alarming precedent that threatens academic freedom and suppresses freedom of thought and expression, especially in the field of humanities and social sciences. [Aswat Masriya, 5/85/2013]

EOHR demands investigation into allegations of torture
The Egyptian Organization for Human Rights (EOHR) has called on the prosecutor general and the minister of interior to investigate an incident of torture that occurred in a Port Said prison. In a statement published on Tuesday, EOHR said it had received a complaint regarding the treatment of Mohamed Darwish Khudair, who was arrested in Port Said in 2011 on charges of attempted kidnapping and resisting arrest. EOHR says Khudair was subjected to “severe physical and verbal torture”. The human rights group reported that Khudair accused one of the prison officers of causing him injury and this officer was referred to a criminal court. During this time another prison officer subjected Khudair to “the worst forms of torture”, said EOHR. He also was deprived of food and medical treatment. [DNE, 5/7/2013]

UN official warns Egypt law could prompt crackdown
The U.N.’s top human rights official is urging Egypt’s government to make sure that a draft law on civil groups doesn’t allow a security crackdown on them. Navi Pillay, the U.N. high commissioner for human rights, says the draft law “risks placing civil society under the thumb of security ministries, which have a history of abusing human rights and an interest in minimizing scrutiny.” [AP, UN-OHCHR, 5/8/2013]

Egypt moves for UN condemnation of Israeli aggression toward Syria
The Arab group at the United Nations (UN) has sent letters to the Secretary-General of the UN and the Security Council’s President, urging their condemnation of the Israeli attacks on Syria and demanding that the Security Council act to stop these attacks and prevent them from recurring. The letters, prepared by Egypt’s permanent delegation to the UN, specifically decried Israel’s attacks and warned of their hazardous repercussions. Meanwhile, Assistant Foreign Minister for Arab Affairs Ambassador Nasser Kamel said that Egypt believes in the political solution to the Syrian crisis, especially in light of the Israeli attacks. He also noted that only stability, preserving the social and sectarian fabric and reaching a political solution to such a crisis would preserve Syria’s unity. [Aswat Masriya, SIS, 5/8/2013]

Kamel Amr denounces arrest of Aqsa Grand Mufti, calls on Israel to release him
Egypt’s Minister of Foreign Affairs Mohamed Kamel Amr condemned the Israeli authorities’ arrest of Sheikh Muhammad Hussein, the Mufti of Jerusalem and the Palestinian territories, on Wednesday morning. The foreign minister warned that Israel’s continued violations in Jerusalem, and in particular the increasing frequency incursions al-Aqsa Mosque, will lead to the provocation of millions of Muslims. Dr. Ahmed al-Tayeb, Sheikh of al-Azhar, joined in the condemnation and called on Arab and Muslim rulers, the United Nations, and international institutions for human rights to intervene. [SIS, Shorouk (Arabic), Shorouk (Arabic), 5/8/2013]