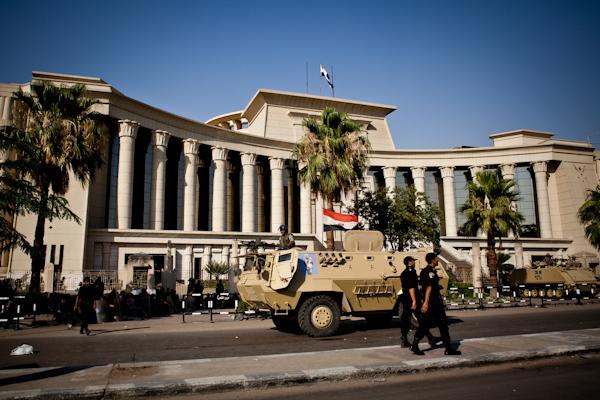 Brawls broke out in an Egyptian courtroom as judges tried to debate rulings on Tuesday that could either bolster the country’s new Islamist President Mohamed Mursi, or undermine him in his power struggle with the military. Legal opinion is split on whether the Cairo administrative court will strike down Egypt’s constituent assembly, formed by an Islamist-dominated parliament with the tasked of re-writing Egypt’s constitution.

EDITOR’S NOTE: According to Al Masry Al Youm, the case reviewed by Cairo Administrative Court requesting the nullification of the Constituent Assembly was postponed to September 1, after MB lawyers demanded judges be changed.

Several pivotal cases to be reviewed by Administrative Court

[Egypt Independent, 7/17/2012] Cairo Administrative Court on Tuesday will review various lawsuits that could lead the country into a new wave of political uncertainty. The court will review a case demanding canceling People’s Assembly dissolution decision and review the legality of a decision by President Mohamed Morsy to reinstate the parliament and the supplement to the Constitutional Declaration. Lawsuits requesting the nullification of the Constituent Assembly and dissolution of the Shura Council will also be reviewed. The court will also review appeals by lawyers and members of Parliament against the Supreme Council of Armed Forces’ decision to dissolve the elected parliament, and an appeal filed against the SCAF issuing the supplement to the Constitutional Declaration. Twelve appeals were filed to the Administrative Court against the 100-member Constituent Assembly. If the court decrees the assembly illegitimate, the SCAF will form another one, according to the supplement to the Constitutional Declaration.

Brawls in Egypt court as judges meet on constitution

[Al Masry Al Youm (Arabic), Reuters, 7/17/2012] Brawls broke out in an Egyptian courtroom as judges tried to debate rulings on Tuesday that could either bolster the country’s new Islamist President Mohamed Mursi, or undermine him in his power struggle with the military. Legal opinion is split on whether the Cairo administrative court will strike down Egypt’s constituent assembly, formed by an Islamist-dominated parliament with the tasked of re-writing Egypt’s constitution. The divisions were reflected at the court, where members of the public pushed and elbowed lawyers and one other, angrily shouting demands and counter demands. At Tuesday’s hearings judges will decide if an assembly drafting a new constitution should be scrapped. They will also hear appeals against decrees by the military and one from Mursi that recalled an Islamist-dominated parliament that the generals had dissolved.

[Egypt Independent, 7/16/2012] Political parties on Monday criticized President Mohamed Morsy for approving a law that was issued by Parliament before its disbandment on 14 June setting the criteria for the Constituent Assembly that would draft the new constitution. Observers considered it an attempt on Morsy’s part to protect the assembly, which is dominated by Islamists, from lawsuits filed against it. The Conservative Party on Monday criticized Morsy’s decision, considering it a circumvention of the judiciary and an abuse of power.

[Al Sharq Al Awsat (Arabic), 7/17/2012] Essam al-Erian, acting chairman of the Muslim Brotherhood’s Freedom and Justice Party, has said that his party is insistent on preserving the People’s Assembly, which the Supreme Constitutional Court ruled in mid-June was invalid due to the unconstitutionality of the law overseeing its election. Erian, in an interview with the London-based Asharq Al-Awsat published on Tuesday, said that he believes the Egyptian people strongly oppose Parliament’s dissolution, adding that several legal avenues are available, including holding a referendum on the issue.

Egypt’s long-awaited new premier likely to be a Liberal economist, not a Brother

[Ahram Online, 7/17/2012] More than two weeks have passed since Egyptian President Mohamed Morsi was inaugurated on 30 June, yet the country still awaits the appointment of a cabinet. The presidency has announced that a prime minister would be named on Tuesday. Morsi explained the long wait on Monday by saying that he preferred to take his time and make “prudent” appointments, rather make any hasty decisions. Names of several potential candidates to head up the incoming government have been floating around for a while now. Almost all of them are economy people, making it very likely that Egypt’s next premier will be a money-man.

[Reuters, 7/17/2012] An industrial dispute in the Egyptian city of Suez triggered clashes between the police and workers who broke into a government building on Tuesday, setting fire to furniture, security sources and workers said. Factory workers at Ceramica Cleopatra, a privately-owned firm, had gathered outside government offices in the port city to demand the authorities intervene to resolve their dispute. Ceramica Cleopatra, one of Egypt’s biggest ceramics firms, has been hit by intermittent strikes for months as factory workers complain of low wages.

[Ahram Online, 7/16/2012] The International Monetary Fund on Monday revised upwards its economic forecast for the Middle East and North Africa even as it trimmed its predictions for global growth. The IMF said it now expects growth of 5.5 per cent for the MENA region in 2012, 1.3 per cent higher than its April forecast, helped by boosts in Saudi and Libyan oil production. Its prediction of a 3.7 per cent climb for the region in 2013 remained unchanged. The region, which is a net importer of raw materials and food staples, may also benefit from a projected easing in global consumer price inflation.

[Egypt Independent, 7/16/2012] The Supreme Council of the Armed Forces “controls” President Mohamed Morsy, a Tunisian government spokesperson has said. Samir Dilou also said the Muslim Brotherhood and its Freedom and Justice Party were forced to field a candidate in the presidential election to prevent a former member of the Hosni Mubarak regime from winning. Dilou said the SCAF is trying to control the president’s powers and restrict them, because the Supreme Constitutional Court only ruled to dissolve one-third of the assembly, not all of it, as was done by the military council shortly after the ruling.

[Ahram Online, 7/16/2012] The Netherlands embassy in Cairo clarified on Monday that any political asylum granted to Egyptian Copts will be assessed on a case-by-case basis. News reports had circulated in some private media outlets over the past few days that the Netherlands officially agreed to grant Egyptian Coptic Christians political asylum as a group. In their statement, however, the Dutch embassy stressed that no change has been made in their processing of asylum requests. They did add, however, that political asylum will be granted if the petitioner can prove a real risk of a violation of article three of the European Convention for the Protection of Human Rights.