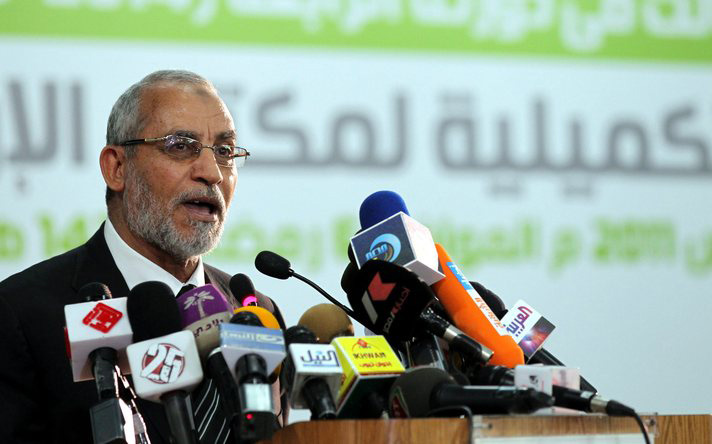 1) Egyptian election officials have not yet confirmed date of the upcoming presidential election. Chairman of the presidential election commission expressed hope that the process could be over by the end of May, and attributed the delay in finalizing the elections schedule to the logistical challenges of organizing the expatriate vote.  [BBC, Arabic, 2/22/2012]

2) Supreme Guide Mohamed Badie said that the Brotherhood wants the next president to have “an Islamic background.” "The candidate that we support will not be a candidate who belongs to a particular Islamist movement, or we would have run ourselves," Badie said, while noting that "the candidate must have an Islamic background.” [Reuters, English, 2/22/2012] [al-Moheet, Arabic, 2/22/2012]

4) The Freedom and Justice Party issued an official statement of support for civil society, citing remarks by the party’s chairman, Mohamed Morsy on February 20: “The FJP supports immediate lifting of restrictions on the establishment and registration of NGOs, so interested groups can work legally and transparently,” Morsy said. “Indeed, Egypt needs the support of NGOs especially in the areas of human development, education, technology transfer and public administration.” [IkwhanWeb, English, 2/20/2012]

5) On February 21, Secretary of State Hillary Clinton expressed hope that the U.S. will soon resolve the crisis with Egypt over its plans to try NGO employees.  "We’ve had a senior team in Cairo in recent days trying to work through the issues so that they can be resolved as soon as possible…I think it’s probably better just to continue the hard work of our engagement and hope that we’ll see a resolution soon," Clinton said. [AFP, English, 2/22/2012]

6) Hosni Mubarak declined an opportunity to address the court in the last session before the verdict in the seven-month trial in which he faces the death penalty.  The prosecution is asking for the death sentence for Mubarak, usually carried out by hanging in Egypt. Mubarak’s defense team argues that he is still president, and thus can only be tried for treason or in a special court. The judge was expected to set a date for the verdict and sentencing later on February 22. [Washington Post, English, 2/22/2012] [al-Ahram, English, 2/22/2012]