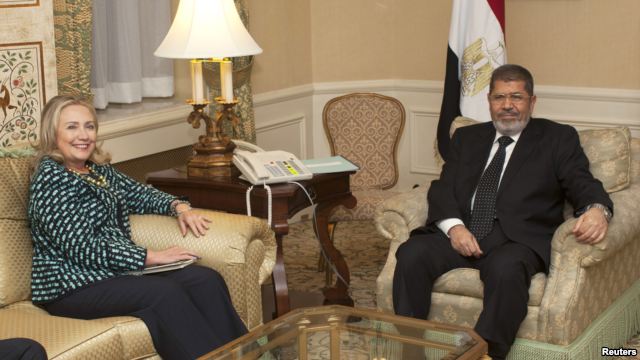 Secretary of State Hillary Clinton reassured Egypt’s new Islamist president on Monday that the United States would forge ahead with plans to expand economic assistance despite anti-American protests that cast new shadows over U.S. engagement with the region.

Poll: After 80 days, 79% of the citizens are satisfied with Morsi’s performance
A second poll conducted by the Egyptian Center for Public Opinion Research found that 79% of the citizens approved of the performance of President Mohamed Morsi, after 80 days on the start of his presidency, while opposed by only 13%, with 8% unsure. The poll, which was conducted on 1665 citizens in various provinces showed higher support for the President’s performance in the countryside compared to urban setting (80% versus 78%), with high male approval over female (81% versus 77%). [EGYNews (Arabic), 9/25/2012]

Future of Egypt’s Shura Council finalized
According to Dr. Gamal Gibril, head of the System of Governance Committee in the Constituent Assembly, members agreed to keeping the Shura Council in Egyptian political life under a new name, the Senate, granting it full legislative powers. Jibril said in his speech today before the CA that members of the new Shura Council will be elected except for ten appointed by the President. Term limits will not exceed 6 years and half term elections every 3 years will revise its membership. [Ahram (Arabic), 9/25/2012]

Egyptian intellectuals propose alternative constitution stressing freedoms
Freedom of expression could be threatened under Egypt’s new constitution, a group of leading intellectuals said Monday. Egypt’s Constituent Assembly, which is tasked with drafting a new constitution, should be disbanded and reconstituted with new membership, prominent Egyptian novelist Bahaa Taher asserted at a press conference organised by the National Committee for the Defence of Freedom of Expression (NCDFE). A coalition of women’s rights [Ahram Online, 9/24/2012]

Egyptian Copt charged with blasphemy referred to misdemeanors court
Egyptian Prosecutor-General Abdel-Meguid Mahmoud on Monday referred political activist Albert Saber – charged with insulting religion – to a misdemeanours court. Albert was arrested on 13 September after allegedly posting the controversial anti-Islam film, ‘The Innocence of Muslims’ – which prompted widespread protests throughout the region earlier this month – on his Facebook page. Saber’s first court session has been scheduled for 26 September. [Ahram Online, 9/24/2012]

Egypt outlines development projects to create jobs, lure back investors
Egypt outlined a string of projects on Monday to develop areas including those around the Suez Canal and in the south of the country in a bid to create jobs and attract investors back to an economy damaged by political turmoil. The projects, a mix of government and public-private partnerships, include building a new tunnel under the Suez Canal and a major Mediterranean port to spread Egypt’s population more evenly away from the crowded Nile Valley and Delta region, where the vast majority of the nation’s 83 million people live. [Reuters, 9/24/2012]

Teachers to suspend strike after meeting with Education Minister
Deputy Head of Independent Teachers Syndicate Ayman al-Bayali said Monday that protesting teachers will suspend their strike for 15 days until the government responds to their demands. During a meeting with Education Minister Ibrahim Ghoneim and members of the Syndicate, Bayali threatened that teachers will strike again if their demands weren’t met. [Egypt Independent, 9/25/2012]

Students and workers clash at AUC
In an escalation of events, students closed the gates of the American University in Cairo for the third time on Sunday and the administration decided to suspend all the university’s activities until further notice, as allegations of violence flew between the two sides. Before making the decision, the administration sent an email to the faculty urging them to try and convince the students to open the gates and to use other more democratic tactics. As a result, many members of faculty and staff went to negotiate with the students on the gate. Quarrels led to shouting matches, sometimes developing into physical fights. [Egypt Independent, 9/25/2012]

Morsi opposes foreign intervention in Syria
In an interview with PBS television’s Charlie Rose ahead of the UN General Assembly meeting in New York, President Mohamed Morsi said the diplomatic quartet of Egypt, Iran, Saudi Arabia and Turkey could help end the 18-month-old conflict in Syria. "President Assad has no choice but to leave," Morsi added. "There is no room for political reform. Change is what the people want, and the will of the people must be respected," he added. [AFP/Ahram Online, Shorouk (Arabic), 9/25/2012]

Egypt: Libya Backtracks On Closing Borders With Egypt
The Libyan authorities backtracked on closing its borders in face of Egyptians and trucks carrying goods after Egyptian security agencies threatened to apply the principle of reciprocity and preventing Libyans from crossing borders. Director of the ports security Mohamed El-Shahat said that the problem backlog at Salloum border crossing is on way to be resolved after the Libyan authorities allowed all vehicles to cross borders. [allAfrica, 9/24/2012]

Jama’a al-Islamiya, Sudan ruling party sign cooperation agreement
Sudan’s ruling party and the political party of Jama’a al-Islamiya in Egypt signed a joint cooperation agreement Monday in Khartoum. The two sides said in a joint statement that the real challenge facing Islamists in both Sudan and Egypt is to unite by establishing strong alliances on the state level and to work together. [Egypt Independent, 9/24/2012]