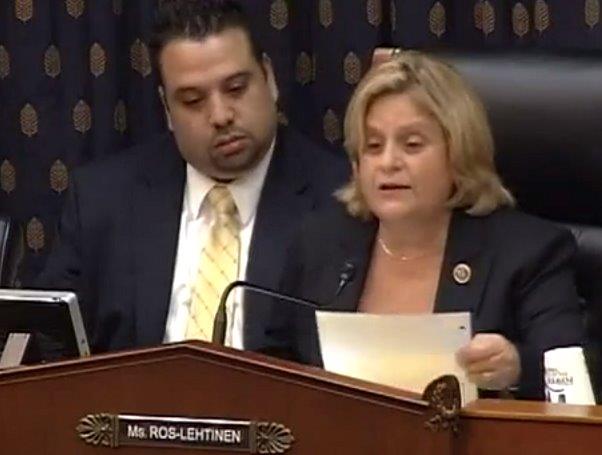 In Washington DC, the Subcommittee on the Middle East and North Africa held a hearing on the verdict convicting forty-three NGO workers of operating illegally. Chairperson of the Subcommittee, Ileana Ros-Leitnen, called on Congress to send a strong message to President Morsi to pardon all the defendants and allow the accused NGO to continue to operate without additional government interference.

Al-Nour calls for ‘real’ reconciliation, warns Morsi over growing opposition
Egypt’s Salafi Nour Party has urged President Mohamed Morsi to respond to its initiative to resolve the burgeoning political crisis, as anti-government opposition extends beyond party political lines ahead of 30 June demonstrations. The Nour Party’s initiative sets out plans for dialogue talks which guarantee mechanisms for upcoming parliamentary elections and electoral guidelines. According to the plan, Morsi would also have to accept any eventual outcome from dialogue, as promised. [DNE, Egypt Independent, 6/12/2013]

Political forces prepare for June 30
President Mohamed Morsi will meet with representatives from twelve Islamist parties on Saturday in anticipation of mass protests planned by opposition and activist groups for 30 June. The Islamic Legitimate Body of Rights and Reformation, an independent cross-party committee of Muslim scholars that includes Salafi and Muslim scholars, called for the meeting. Islamic forces would stand behind the president, a representative claimed, even if opposition protests descended into violence. Meanwhile, Amr Moussa, a leading member of the National Salvation Front (NSF), urged Morsi to accept the demands of the "Tamarod" (Rebel) campaign and not regard the campaign as a conspiracy. In a statement issued earlier on Wednesday, Moussa said that the NSF did not reject previous invitations from the presidency for dialogue, adding that the front just expressed the need to have guarantees ensuring the dialogue’s seriousness. Tarek al-Zomor, head of al-Jama’a Islamiya’s political arm, the Construction and Development party, denounced the June 30 calls to protest as illegal, describing them as a “systematic call to resort to violence.” The Muslim Brotherhood has also called on President Morsi and PM Qandil to hold the Interior Ministry to account for statements expressing its refusal to protect demonstrations. [Egypt Independent, Aswat Masriya, ONA (Arabic), Shorouk (Arabic), 6/13/13]

Government to auction off official gifts
The Ministry of Finance will next week hold a landmark public auction to sell off gifts state officials received from Arab governments and international figures. Gifts received by Egyptian officials between July 2012 to June 2013, either during foreign trips or visits by other countries, will be on sale during the auction. The sale is expected to feature forty-two precious items, Finance Minister Fayyad Abdel Moneim said in a press conference on Thursday. The initiative follows Prime Minister Hisham Qandil’s announcement that government officials should hand over presents worth more than US$100 to the public treasury to ensure transparency and protect public funds. [Egypt Independent, EGYNews (Arabic), 6/13/2013]

Foreign direct investment dries up
Egypt is seeing a mass exit of foreign direct investments (FDIs) amounting to around $140m from about ten countries, according to a report by the General Authority for Investment and Free Zones. “Delayed completion of an economic reform plan which places sealing the IMF deal on hold, coupled with the escalating conflict between judges and the ruling regime and the non-consensus cabinet reshuffle which put stability at risk is applying pressure on FDIs,” said Alia Mamdouh, an economist at CI Capital. According to a report by the United States Bureau of Economic and Business Affairs, FDI accounted for less than 25 percent of all investment in Egypt before the revolution and has fallen tremendously since as a result of significant impediments to investment. [DNE, 6/13/2013]

Egypt to see blackouts for three years at least: Experts
Blackouts in Egypt have become more frequent this summer, accentuated by new factors. The shortfall between production and consumption that persisted for several years has expanded even more because of a shortage of dollars affecting fuel supplies needed for electrical power plants. Actual power production in Egypt has fallen to 19,000 Megawatts (MW) at some points, while the country has capacity that should exceed 26,000 MW. Despite the risks the energy crisis poses to the economy, no radical solution is expected in the short term. The government announced a five year plan to produce an additional 13,200 MW. To build power plants with this capacity, investment of LE90 billion ($12.85 billion) will be needed according to official figures. However, building new power plants will not be enough. The government needs to improve gas supplies, calm social tensions, encourage people to rationalize consumption, and finally reduce subsidies to solve the financial liquidity problem, according to experts. [Ahram Online, 6/12/2013]

Brotherhood, Rebel swap blame for Alexandria clashes
Scuffles between supporters and opponents of Egypt’s Islamist President Mohamed Morsi have injured up to sixteen in the northern port city of Alexandria. Egypt’s Muslim Brotherhood and the opposition Rebel campaign have blamed each other for starting clashes in Alexandria on Wednesday night that led to the destruction of a local Freedom and Justice Party (FJP) office. This comes as the Tamarod campaign announced on Wednesday that they are nearing their goal of gathering 15 million signatures on a petition withdrawing confidence from the president. [Ahram Online, AP, Aswat Masriya, Al Ahram (Arabic), DNE, Ikhwanweb, 6/13/2013]

Islamist parties call for protests against violence
Islamist parties called for a million man march in front of Raba’a al-Adaweya mosque in Nasr City on June 21 under the slogan “No to violence.” Several Islamist political parties, including the Freedom and Justice, al-Watan, Building and Development, New Labor, and al-Wasat parties, attended the press conference on Wednesday to call for protests rejecting violence. The call came amid fears of clashes between supporters of President Mohamed Morsi and anti-regime protesters on June 30. Meanwhile, the Black Bloc announced that it will participate in the June 30 protests, adding that its members will not resort to violence. Commenting on the June 30 protests, Bishop Rofael, Secretary of the Holy Synod, said in a Wednesday tweet that “every person is free” and “any statements [regarding the protests which are] attributed to the [Orthodox] church are incorrect.” [DNE, Aswat Masriya, Egypt Independent, Shorouk (Arabic), 6/12/2013]

Ethiopia expects Egypt talks over Nile Dam, says won’t back down
Ethiopia’s foreign ministry said on Wednesday the country had no intention of suspending construction of what would be the biggest hydro electric plant on the continent, despite their frustration with Egypt’s ‘war talk’ at the Grand Ethiopian Renaissance Dam (GERD) conference. The Ethiopian parliament on Thursday ratified an accord that replaces colonial-era deals that awarded Egypt and Sudan the majority of the world’s longest river. An Egyptian expert on a tri-partite committee assessing the consequences of the dam has claimed the project would adversely affect Egypt’s share of River Nile water supplies. Prime Minister Hisham Qandil has said that Foreign Minister Mohamed Kamel will visit Ethiopia by the end of June in a bid to make the latter’s Renaissance Dam project a "win-win" situation for both countries and in a show of ‘good will.’ In an interview with CNN, Qandil emphasized their understanding of the rights of States to establish developmental projects on Nile. The Egyptian Armed Forces confirmed that they are not yet involved in a dispute although are ready and able to protect the nation. The patriarch of the Ethiopian Coptic Orthodox Church’s visit has been postponed while UNHCR appeals to Egypt to protect Ethiopians in Cairo. [DNE, Ahram Online, SIS, Reuters, Egypt Independent, ONA (Arabic), CNN (video), 6/13/2013]

Undersecretary Sherman meets with political parties, Congressional committee calls for pardon of NGO trial defendants
A number of political forces met with Undersecretary Wendy Sherman to discuss the latest developments taking place in Egypt, their respective views on the current political situation, and their position on the June 30 demonstrations. The Dostour, Wafd, Egyptian Democrats, Nour, Reform & Development, and Strong Egypt parties participated in the meeting. All but the Nour party rejected President Morsi’s call for dialogue, insisting that he be removed from power. Meanwhile, in Washington DC, the Subcommittee on the Middle East and North Africa held a hearing on the verdict convicting forty-three NGO workers of operating illegally. Chairperson of the Subcommittee, Ileana Ros-Leitnen, called on Congress to send a strong message to President Morsi to pardon all the defendants and allow the accused NGO to continue to operate without additional government interference. [Shorouk (Arabic), ONA (Arabic), House Committee on Foreign Affairs, AMAY (Arabic), 6/13/2013]