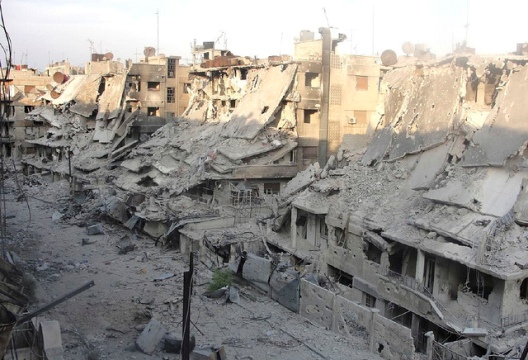 The death toll in Syria’s civil war has risen to at least 130,433, more than a third of them civilians, but the real figure is probably much higher, the Syrian Observatory for Human Rights said on Tuesday.  More than 73,000 people were killed in 2013 alone, the bloodiest year yet in the brutal civil war that began in March 2011. The shelling of a bus in Aleppo capped a merciless year. [Reuters, 12/31/2013]

Ad featuring puppet prompts investigation by state security prosecutors
Prosecutors have questioned officials in one of Egypt’s largest telecommunications companies over an online advertisement featuring a puppet, which a controversial blogger has accused of delivering a coded message linked to the Muslim Brotherhood, the company said Wednesday. The Egyptian unit of Vodafone, the world’s biggest mobile operator by revenue, rejected the suggestions. The preliminary investigation was launched following a complaint by twenty-five year-old Ahmed Spider, a self-styled youth activist known as a strong supporter of ousted President Hosni Mubarak, security and judicial sources said. Spider explained the alleged code on the al-Tahrir network on Tuesday night. A statement by Vodafone said that the prosecutors summoned the company representatives and asked about the accusations but did not make any accusations themselves. [Reuters, AP, Mada Masr, Ahram Online, Egypt Independent, 1/2/2014]

Morsi jailbreak trial to begin late January
Former president Mohamed Morsi and other Muslim Brotherhood members are to face a fresh trial beginning on January 28, an appeal court in Cairo has announced. One hundred and thirty Brotherhood members will be tried alongside Morsi, including senior leaders Mohamed Saad al-Katatni, Essam al-Erian, Mohamed al-Beltagy, and Safwat Hegazy. They are accused of collaborating with nearly seventy members of the Palestinian Islamist group Hamas and Lebanese Shia group Hezbollah to escape from Wadi al-Natroun prison during the January 2011 uprising and attempting to murder police officers. Symbolically, the trial date falls on the third anniversary of the day when Morsi and more than thirty others from his Muslim Brotherhood group, who were jailed at the time, escaped from a Cairo prison. [Ahram Online, Reuters, AFP/DNE, AP, Egypt Independent, 1/2/2014]

Muslim Brotherhood rejects terrorist designation
The Muslim Brotherhood responded on Monday to its recent designation as a terrorist organization. In a statement the group called the government’s move “illegitimate” before declaring that the “government is a failure.”  The Egyptian government formally listed the group as a terrorist organization after accusing it of carrying out a suicide bomb attack on a police station that killed sixteen. The decision gives the government the power to charge any member of the Brotherhood with belonging to a terrorist group, as well as anyone who finances the group or promotes it “verbally, or in writing.” According to authorities, the organization will be legally accountable under Article 86 of the Egyptian Penal Code, which stipulates that the death penalty may be handed out to individuals belonging to the organization if found guilty of acts of terrorism.  Shaaban Abdel Aleem, a member of the Salafi-led Nour Party’s presidential council, also rejected labeling the Muslim Brotherhood a terrorist group, stating that everyone in the group is responsible for himself as well as the violence he commits. More than 1,000 Brotherhood-funded entities are now eligible to be shut down across the country. [Ahram Online, DNE, Egypt Independent, Mada Masr, Reuters, 12/30/2013]

Interior minister accuses Hamas of involvement in Mansoura blast
Minister of Interior Mohamed Ibrahim has accused Palestinian Islamist movement Hamas of providing logistical support to assailants in the recent Mansoura terrorist attack that killed sixteen and injured more than 130. Ibrahim also said on Tuesday that “ninety percent” of those responsible for the bomb attack in the city of Mansoura last week have been arrested. The minister said at a press conference that the details will be announced once all the perpetrators have been arrested. No further details on the arrests were given. [Ahram Online, Egypt Independent, 1/2/2014]

Libya says protesters agree to reopen major oilfield
Libya hopes to resume oil production at the large el Sharara oilfield within three days after protesters agreed to suspend their two-month stoppage, according to officials. Oil prices fell below $110 a barrel on the news. Protesters have been demanding the establishment of a local council and national identity cards for tribesmen from the Tuareg minority. They have blocked the oilfield since the end of October, one of many disruptions that have crippled Libya’s vital oil sector. The defense ministry said the protesters had agreed to suspend their strike after the government agreed to listen to their demands. Meanwhile the labor ministry warned that strikes at the major ports and oilfields deter foreign investment and hurt Libya’s ability to pay public salaries. [Reuters, 1/2/2014]

Over one million register for constitutional elections
On the final day of voter registration through a telephone text message system, the High National Elections Commission (HNEC) has registered 1,001,910 people to vote for the constitutional draft committee. 59.4% are men and 40.6% are women. The highest rate of registrations in a single day was December 31, with a total of 85,729. By contrast, in the July 2012 elections for the General National Congress, almost three million eligible voters registered to participate. HNEC head Nuri Elabbar said the elections will likely take place in mid-February and that Libyans would still be able to register or change their polling stations in person between January 11-16. [Libya Herald, 1/1/2014]

Zidan vote of ‘no-confidence’ on GNC agenda next week
The General National Congress (GNC) will vote on January 5 on a motion to withdraw confidence in the government of Ali Zidan and to form a crisis government. It will be the second item on the GNC’s agenda, following a discussion of the oil port blockages in eastern Libya. The GNC had given Zidan a deadline of one week beginning December 17, 2013 to resolve the oil crisis, which remains unresolved. The no-confidence vote will not be the first time that some GNC members have attempted to bring down the current government, but previous efforts failed due to the GNC’s lack of a quorum. A vote to remove a government would need broad agreement across all political groupings, including the independents, as it would require 120 votes. [Libya Herald, 1/1/2014]

A deadly mix in Benghazi
In an investigative report into the September 2012 assault on the US Consulate in Benghazi, the New York Times found no evidence that al Qaeda or other international terrorist groups had any role in the attack. Instead, the assault was led by local militias and largely fueled by anger over an amateur anti-Islam video that had recently gone viral. The in-depth report reveals the risks of using aid to acquire loyalty, how the United States relied too much on apparent allies to warn of a possible attack, and that focusing on the combat against al Qaeda may distract from safeguarding US interests. [New York Times, 12/28/2013]

United Nations seeks access to besieged Palestinian district after fifteen die of hunger
The United Nations appealed on Monday for the Syrian army and rebel fighters to allow urgent aid to reach a Palestinian district of southern Damascus where it said fifteen people have died of malnutrition in recent months. The UN Relief and Works Agency (UNRWA) spokesman said five Palestinian refugees died in the Yarmouk district over the weekend. Ten others have died since September, the last time UNRWA was able to deliver aid to Yarmouk. “The situation has progressively deteriorated for some 20,000 Palestinians trapped inside Yarmouk,” the spokesman told reporters. “The continued presence of armed groups that entered the area at the end of 2012 and its closure by government forces have thwarted all our humanitarian efforts.” [Reuters, 12/30/2013]

Turkey seizes arms in truck bound for Syria
Turkish security forces have seized a truck laden with weapons bound for Syria and arrested three people, including a Syrian, local media reported on Thursday. Acting on a tipoff, security forces stopped the truck in the southern Hatay province on the Syrian border. A significant quantity of ammunition and weapons were discovered in the truck, whose drivers claimed they were carrying aid on behalf of the pro-Islamic Humanitarian Relief Foundation (IHH). IHH dismissed the allegations as “slanderous.” [AFP, 1/2/2014]

Tunisia arrests four militants after firefight
Tunisia says four militants have been arrested after late-night gun battles between militants and security forces in the southern city of Sidi Bouzid, where the popular uprising culminating in the country’s revolution began. In a statement, the interior ministry said the arrests followed clashes in the impoverished city, and police confiscated explosives, money, ammunition, and an assault rifle. Police say those arrested belonged to Ansar al-Sharia, a banned ultraconservative Islamist group linked to terrorist attacks and the September 2012 assault on the US Embassy in Tunis. [AP, 1/2/2014]

Tunisian parties reach compromise on constitution
The head of Tunisia’s transitional parliament said rival political parties reached agreement on contentious points in a draft constitution, and the document will go to the legislature on January 3. Parliament President Mustapha Ben Jaafar said on Saturday that the ruling Islamist party, Ennahda, which had wanted a pure parliamentary system, agreed instead to give more powers to a president, including the power to dissolve the legislature. In another compromise, the government, which had already agreed to hand power to technocrats in the run-up to elections, will do so on January 8. [AP, 12/28/2013]

US denies role in arrest of Tunisian militant
The United States denies taking part in the arrest of the head of Tunisian militant group Ansar al-Sharia in Libya, a spokesman for US Africa Command said, after Tunisia’s state media reported that US and Libyan forces had captured the Islamist leader. Tunisia’s TAP agency, citing a senior security source said Abu Iyadh was captured in Libya’s coastal city of Misrata on Monday morning. The Libyan government has not commented on the story, and Misrata officials deny the militant leader was caught in their city. Ansar al-Sharia in Tunisia “denies any information stating that its prince, the Tunisian Abu Iyadh, may God protect him, has been captured,” according to the group’s Twitter account. [Al Arabiya, 12/30, 2013]

Teacher’s union member killed, motive unclear
Mohamed Taher Laabidi, a member of a teacher’s union, was killed in his house in the northwestern town of Sers early yesterday morning by two masked men. The interior ministry claims his wife has confessed to involvement in his death. Laabidi’s death grabbed headlines but does not appear to be politically motivated. Speaking at a radio station, Sami Tahri, deputy secretary general for communication of the powerful union UGTT, said that further investigations must be conducted in order to determine the motives and the nature of the crime. [Tunisia Live, 1/2/2014]

Houthis welcome ceasefire proposal
After a meeting called by President Abdrabbo Mansour Hadi between military leaders and representatives from Ansar Allah, the Houthi group welcomed a ceasefire proposal. For weeks the deadly conflict between Houthis and Salafis in Saada has intensified, threatening to disrupt the National Dialogue. [Al-Masdar (Arabic), 1/1/2014]

Alleged AQAP members killed in drone strike in Abyan
Two alleged al-Qaeda in the Arabian Peninsula affiliates were killed in a drone strike yesterday in the al-Mahfad district of Abyan governorate in southern Yemen, according to the interior ministry. However, several local sources claim that six people died in the attack. [Yemen Times, 1/2/2014]

Car bomb in Beirut kills four, wounds sixty-six
Four people were killed and sixty-six others were wounded Thursday when a car bomb ripped through the Beirut southern suburb of Haret Hreik where Hezbollah enjoys broad support. Thursday’s blast comes only days after a car bomb in Downtown Beirut killed former Minister Mohammad Shatah and seven others. Lebanon has been hit by a spate of deadly security incidents linked to the ongoing crisis in neighboring Syria. [Daily Star, 1/2/2014]