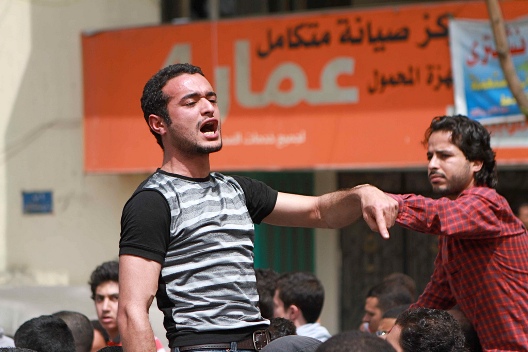 Three leading figures of Egypt’s 2011 uprising were jailed for three years each on Sunday for their role in recent protests, as the army-backed authorities intensified a crackdown on dissent.

Mansour hints Sisi ‘hasn’t decided yet’ whether to run for presidency
Egyptian Interim President Adly Mansour hinted Sunday that the country’s army chief, Abdel-Fattah al-Sisi, is still deciding whether or not to run for the presidency amid the soaring popularity of the general following Mohamed Morsi’s ouster. Mansour, in a meeting Sunday with dozens of political figures in Cairo to discuss the post-Morsi roadmap, urged attendees not to focus their efforts on “one certain person” whom they want to see as president, because “this person has not yet made his decision and he might eventually decide not to run.” Meanwhile, former presidential candidate and Popular Current founder Hamdeen Sabbahi denied claims circulating on news websites that he would support Sisi for president, announcing his intention to run. Sabbahi, backed by the Nasserist led Popular Current movement, called for a serious national dialogue between the country’s political forces aiming to “reach consensus on a platform expressing the [Egyptian] revolution’s demands, a team to implement them and a presidential candidate,” read the statement. However, head of Egypt’s constitutional drafting committee, Amr Moussa, said that he is not willing to run in upcoming presidential elections, expressing his support for Sisi if he runs. [Ahram Online, Egypt Independent, Aswat Masriya, 12/22/2013]

Egypt activists Maher, Adel and Douma sentenced to three years in jail
Three leading figures of Egypt’s 2011 uprising were jailed for three years each on Sunday for their role in recent protests, as the army-backed authorities intensified a crackdown on dissent. Ahmed Maher, Ahmed Douma and Mohamed Adel are symbols of the protest movement that ignited the revolt that toppled President Hosni Mubarak in 2011. They were each handed a three year sentence with hard labor and obliged to pay an EGP 50,000 ($7,200) fine. The defendants will also be under surveillance for three years after their release. The verdict was the first under a law passed by the army-backed government in November that requires police permission for demonstrations. The European Union urged Egypt to reconsider the jail sentences, while the April 6 Movement announced Sunday that it will drop its support for Egypt’s transitional roadmap, put into effect following the ouster 3 July of Islamist president Mohamed Morsi, due to the verdict. Pro-revolution groups, including the April 6 movement, have also called for a demonstration on Monday to denounce the sentencing. The United Kingdom expressed concern over the verdict, with Mark Simmonds, a minister at the UK’s Foreign Office saying, “This represents a serious setback to attempts to return Egypt to the democratic path and undermines the values expressed by Egyptians during the Revolution of January 2011.” In a statement released Monday, several human rights organizations condemned the ruling against the activists and questioned the due process behind it. Finally, former member of parliament Mostafa al-Naggar commented on the ruling saying that Egypt is currently witnessing a campaign to seek revenge for the revolution. [Ahram Online, Reuters, Egypt Independent, Aswat Masriya, DNE, Mada Masr, 12/23/2013]

Prominent Egyptian judges summoned for ‘law violation’
Investigative judge Mohamed Shereen Fahmy summoned on Sunday founding members of ‘Judges for Egypt’ over allegations of forming a group that violates the law. The summoned judges include former ministers of justice Ahmed Mekki and Ahmed Soliman, ex-presidential advisor to Mohamed Morsi, Mahmoud Mekki, former head of the 2012 constituent assembly Hossam al-Gheriany, former deputy head of the appeals court Mahmoud al-Khodeiry and the former head of the Judges Club Zakaria Abdel-Aziz. The judges – accused of forming a group disturbing security and social peace, as well as inciting strife among judges – are known for their leading role in the movement demanding the independence of the judiciary in 2005-2006 under ousted president Hosni Mubarak. [Ahram Online, Mada Masr, 12/23/2013]

More charges brought against former president Mohamed Morsi
Egypt’s deposed Islamist president, Mohamed Morsi, and 129 others including members of Hamas and Hezbollah, were referred to trial on Saturday on murder and other charges related to a mass jail break during the 2011 uprising against Hosni Mubarak. These are the third set of charges brought against Morsi. Apart from kidnapping and holding police officers hostage, using heavy artillery, and sabotaging governmental premises, the defendants are also charged with stealing poultry and cattle from jail facilities. Meanwhile, a Misdemeanor court recused itself from considering a lawsuit on Monday accusing Morsi of adopting an “illusionary” platform as a candidate in the 2012 presidential elections.  [Reuters, Ahram Online, Egypt Independent, DNE, Aswat Masriya, 12/23/2013]

Egypt says to complete $1.5 billion payment to oil firms this week
Egypt will complete payment this week of $1.5 billion of the $6.3 billion it says it owes oil firms, a state executive said on Monday, in line with a plan aimed at restoring confidence in an economy hit by nearly three years of political turmoil. “Today we are reimbursing $1 billion to the foreign partners and the rest during this week,” the chairman of state-run Egyptian General Petroleum Corporation (EGPC), Tarek al-Molla, told Reuters by telephone. Molla said $1.2 billion of the initial tranche is being paid in U.S. dollars and the remaining $300 million in Egyptian pounds, as officials had indicated. [Reuters, DNE, 12/23/2013]

Al-Azhar and Ain Shams University student protests rage on
On Monday, hundreds of pro-Morsy students from Ain Shams University blocked al-Khalifa al-Maamoun street, bringing traffic to a complete stop. Before heading out on the streets, the students staged a protest outside the university’s administrative office, demanding the release of colleagues who were detained over recent clashes with security forces. Police forces and a number of civilians teamed up to disperse the protest. At Al-Azhar University, students shut down the gates at the Schools of Pharmacy and Agriculture to interrupt midterm examinations. Students had done the same on Sunday at the schools of translation and commerce. Student demonstrations have also continued in several other universities across Egypt. Students at Al-Azhar University in the male campus prevented professors and administrators from entering campus Sunday and boycotted semester exams. Security forces had been deployed in front of the campus to secure it for exams. In a statement posted on their official Facebook page, the Al-Azhar Student Union showed support for students who decided not to attend exams and also asked for the support of the rest of the student body. Meanwhile, Egyptian rights watchdog Association for Free Thought and Expression (AFTE) released a report detailing the violent protests that have plagued universities nationwide during exams week in mid-December. The AFTE has called on students, parents, and the public to “communicate with the institution, and to collect sufficient data to enable the institution to take the necessary legal procedures to enable [detained students] to take their Fall semester exams.” [Ahram Online, Egypt Independent, DNE, Aswat Masriya, 12/23/2013]

Muslim Brotherhood ‘Raba’a’ channel launched, airing from Turkey
The Muslim Brotherhood’s new satellite channel, “Raba’a,” launched Friday and is being aired from Turkey, reported Al-Ahram Arabic website. The channel’s sign is the four-finger Raba’a sign that Brotherhood and Morsi loyalists use in regular ongoing protests against what they describe as a “coup against the legitimate president” in Egypt. The new Raba’a channel opened by hosting pro-Brotherhood Egyptian cleric Yusuf Al-Qaradawi. [Ahram Online, 12/21/2013]

Militant group in Egypt’s Sinai warns military as curfew is imposed in Rafah villages
An al-Qaeda-inspired group in Egypt’s volatile Sinai has warned the country’s military and police, urging troops to desert their ranks or face death at the hands of its fighters. Ansar Jerusalem, or Ansar Bayt al-Maqdis as the group is known, said in a statement on militant websites Monday that it considers Egyptian troops to be infidels because they answer to a “secular government.” If the warning is ignored, Ansar Jerusalem says it “will be more determined to fight” the military and police. Meanwhile, on Friday,  Armed forces imposed curfew in the villages of al-Mahdiya and al-Moqataa, south of Rafah, North Sinai in the aftermath of clashes that took place between the forces and armed elements. Two soldiers and several armed elements were killed, while eights armed forces personnel were injured. On Sunday Egypt’s army spokesman said the Second Field Army has killed four Takfiris after a shootout with them during a crackdown in North Sinai. The crackdown resulted in the demolition of a bricks factory owned by one of the extremely dangerous Takfiri elements and 17 huts belonging to Takfiris, Muslims who accuses other Muslims of apostasy. [AFP/Ahram Online, AP, Egypt Independent, Aswat Masriya, 12/23/2013]

Interior ministry says United States has no right to comment on Morsi trial
No foreign parties have the right to comment on ousted President Mohamed Morsi’s trial, an Interior Ministry spokesman has said. It is unacceptable for any party to interfere in Egyptian affairs, said spokesman Badr Abdel Aati. The Egyptian judiciary is handling the case and there is bigger understanding of the situation in Egypt, the state-run news agency MENA reported Abdel Aati as saying. A Pentagon statement has said that Secretary of Defense Chuck Hagel has made a phone call last Thursday to Egypt’s Defense Minister Abdel Fattah al-Sisi during which he expressed his concern towards the latest charges against Morsi and Muslim Brotherhood leaders. [Aswat Masriya, 12/21/2013]