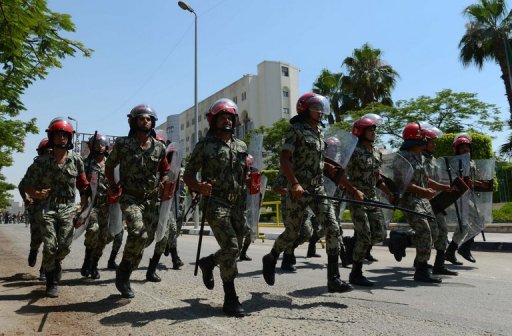 The Supreme Administrative Court has ruled on Tuesday against the Ministry of Justice issued decree allowing military police and intelligence the right to arrest civilians. Rights lawyer Khaled Ali, who filed the appeal against the law, confirmed to Ahram Online from the court that the ruling was in his favour.

[Reuters, Al Ahram (Arabic) 6/26/2012] The Muslim Brotherhood has reached some agreements with the army on the powers that Egypt’s first Islamist president will hold and the fate of the dissolved Islamist-led parliament, Brotherhood officials said on Tuesday. Mursi, seeking to fulfill a promise of inclusive government, will name six vice-presidents – a woman, a Christian and others drawn from non-Brotherhood political groups -to act as an advisory panel, said Sameh Essawi, an aide to the president. Mursi has resigned as head of the Brotherhood’s Freedom and Justice Party to be a "president for all Egyptians" but critics question his independence from the movement’s opaque leadership. The party appointed Essam el-Erian as its interim leader on Tuesday to replace him, but Ahram Online reports that he is still holding his position as the FJP’s vice-president, saying the party’s general assembly is entitled to appoint the new president. The aide, who asked not to be named, said Mursi’s team and the generals who have ruled Egypt since Mubarak’s removal had also agreed on how ministries should be divided in the cabinet. "The ministries of finance and foreign affairs would go to the Brotherhood provided they steer clear of the defence, interior and justice ministries," the aide said.

[Ahram Online, Al Ahram (Arabic) 6/26/2012] The Supreme Administrative Court has ruled on Tuesday against the Ministry of Justice issued decree allowing military police and intelligence the right to arrest civilians. Rights lawyer Khaled Ali, who filed the appeal against the law, confirmed to Ahram Online from the court that the ruling was in his favour. The justice ministry issued a decree on 13 June giving military personnel the right to arrest civilians, a right previously reserved for police officers. The decree is reportedly based on the Military Judiciary Law 25 of 1966. According to the ministry, the decree will remain in effect until a new constitution is drafted. The decree has been condemned by both activists and Rights organisations.

[Egypt Independent, 6/26/2012] A forthcoming court ruling will likely invalidate the Constituent Assembly, said Lawyers Syndicate President Sameh Ashour on Monday night. The Administrative Court is hearing lawsuits on Tuesday filed by a number of lawyers and legal centers against the validity of the second Constituent Assembly, which was elected by former members of the now dissolved People’s Assembly and the Shura Council. According to the recently passed supplement to the Constitutional Declaration, if the Constituent Assembly is disbanded or otherwise unable to carry out its work, the Supreme Council of the Armed Forces will form another within a week. The SCAF claims that their Constituent Assembly would represent all segments of society and would have to craft a new constitution within three months from the date of its formation, which in turn would be put forward for a referendum within 15 days of its completion.

[Egypt Independent, Al Shorouk (Arabic), 6/26/2012] The Administrative Court on Tuesday decided to delay ruling on lawsuits appealing the dissolution of Parliament and the recently-issued supplementary Constitutional Declaration until 7 and 10 July, respectively. Former presidential candidate and human rights activist Khaled Ali, The Arab Network for Human Rights Information and the Association for Freedom of Thought and Expression had filed a lawsuit before the court against controversial additions to the interim constitution issued by the ruling military council last week that largely diminishes the powers of the country’s elected president. The petitioners also challenged the constitutional court’s jurisdiction and the constitutionality of the ruling military’s ensuing decision to dissolve the parliament.

[Egypt Independent, Al Shorouk (Arabic), 6/25/2012] Cairo’s Court of Appeals decided on Monday to postpone the hearing of Major General Hussein Saeed Mohamed Moussa’s appeal against a verdict finding him guilty of destroying evidence regarding the killing of protestors during the 2011 revolution. The appeal will be considered on 16 July. Last year the Cairo Misdemeanor Court found the former director of the Central Security Telecommunications Department guilty of destroying the Central Security Operation room phone records following the 25 January revolution, and sentenced him to two years in prison. Moussa immediately appealed the verdict and has been released on bail pending the result of his appeal.

[Reuters, 6/26/2012] The International Monetary Fund said on Tuesday it stands ready to support Egypt in dealing with its "significant immediate economic challenges" in the wake of its presidential election. The lender called the election of the Muslim Brotherhood’s Mohamed Mursi "an important step" in the nation’s transition. Brotherhood officials have said they plan to pick up from the previous government’s stop-start negotiations for a $3.2 billion IMF loan.

An Iranian news agency said Egypt’s Islamist President-elect Mohamed Morsy had voiced interest in restoring long-severed ties with Tehran to create a strategic "balance" in the region, but a Morsy aide denied the interview ever took place. Iran’s Fars agency said it spoke to Morsy a few hours before Sunday’s election results were announced and quoted him saying the two countries should get closer — comments that go counter to Western efforts to isolate Tehran over its nuclear program. On its web page, Fars published a transcript and an audio of the conversation. Reuters was unable to verify the recording but the man purported to be Morsy did not sound exactly like him. Morsy, striving to reassure Egypt’s western allies wary at the prospect of Islamist rule, is unlikely to stage major foreign policy reversals so early in his rule.