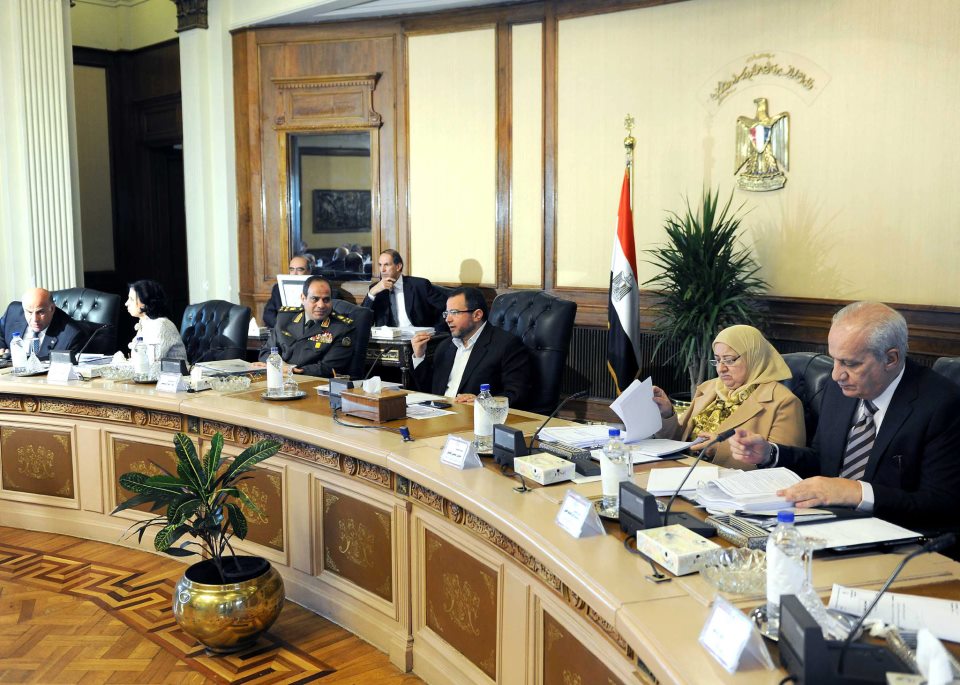 Egypt’s Islamist-led government has asked independent legal experts to propose amendments to the new constitution, the state news agency MENA said on Tuesday, signaling that it may be heeding concerns of the liberal and leftist opposition.

Egypt’s ElBaradei cites 3 ‘conditions’ for opposition talks with presidency
Egypt’s political opposition is "ready" to hold dialogue with the administration of President Mohamed Morsi on three "conditions," Mohamed ElBaradei, a leading figure in the opposition National Salvation Front and founder of the liberal Constitution Party, said Monday. Speaking at an economy conference organised by Egypt’s leftist Popular Current movement, ElBaradei cited the three conditions as follows: appointment of a "neutral and credible" government capable of managing the country; appointment of an independent prosecutor-general; and formation of a new committee tasked with drafting a new elections law. [Egypt Independent, Ahram Online, Reuters, 4/8/2013]

State to investigate cathedral violence amidst public outcry
The presidency claimed it had issued directives to the Ministry of the Interior to take “necessary measures” to protect citizens and ordered an immediate investigation. The Egyptian presidency on Tuesday blamed Coptic youths for starting fights outside St. Mark’s Coptic Orthodox Cathedral with residents of the nearby Abbasiya district during a funeral Friday. Prime Minister Hisham Qandil has also called for the immediate arrest and punishment of the perpetrators of the latest sectarian violence that left two dead and tens injured. An open-ended sit-in was staged on Monday at the Shura Council by a number of council members, mainly from liberal and leftist parties, protesting the sectarian clashes, while the Council’s Security Committee, as well as April 6 co-founder Ahmed Maher have called for the dismissal of the interior minister. The Lawyer’s Syndicate formed a fact-finding commission to investigate the attack on the Cathedral. Religious institutions, political forces and public figures of all persuasions across Egypt have roundly condemned the recent spate of sectarian violence that hit the country over the past few days, while disagreeing on its causes. The leader of Egypt’s Coptic Orthodox Church on Tuesday blasted Morsi, saying he had promised him in a telephone conversation to do everything to protect the Coptic cathedral, "but in reality he did not." [Egypt Independent, DNE, Aswat Masriya, Ahram Online, AP, Shorouk (Arabic), EGYNews (Arabic), 4/9/2013]

Prosecutor general will only leave if court forces him, says spokesperson
Prosecutor General Talaat Abdallah will not resign unless a final verdict ordering his dismissal is issued by the judiciary, public prosecution spokesperson Mostafa Doweidar told the Turkish news agency Anadolu on Monday. It isn’t enough for the Supreme Judicial Council to ask Abdallah to step down, Doweidar said. “For there are thousands of judges and prosecutors who want him to stay,” he claimed. “Only the judiciary has the final say here.” The Muslim Brotherhood also reiterated that Prosecutor General Talaat Abdallah will remain in office and that the statement issued by the Supreme Judicial Council on Sunday has “no value,” and indeed can even be read as recognition of the legitimacy of Abdallah as chief prosecutor of the country.[Egypt Independent, 4/8/2013]

Egypt, in gesture to opponents, eyes constitution changes
Egypt’s Islamist-led government has asked independent legal experts to propose amendments to the new constitution, the state news agency MENA said on Tuesday, signaling that it may be heeding concerns of the liberal and leftist opposition. MENA did not say which articles would be reconsidered, who would sit on the lawyers’ committee or when it would report. A cabinet spokesman was not available for comment and Qandil was travelling in Africa on Tuesday. The agency quoted Qandil as saying the proposed amendments would not be binding on a new parliament, expected to be elected late this year, but that he would send them to President Mohamed Morsi for a decision. [Reuters, Ahram Online, Shorouk (Arabic), 4/9/2013]

Egypt PM to visit donor Qatar amid IMF loan talks
Egypt’s prime minister was due in Qatar on Tuesday for talks with his country’s biggest Gulf Arab financial backer as Cairo is negotiating for an IMF loan to help ease a deepening economic crisis. Hesham Qandil was to fly to Doha after attending the swearing in of Kenya’s new president in Nairobi, his office said. He is due to hold a joint news conference with Qatari Prime Minister Sheikh Hamad bin Jassim al-Thani on Wednesday. Qandil’s visit follows three days of preparatory meetings by Central Bank Governor Hesham Ramez in Qatar, amid tension between Cairo and its major donor over two financial disputes, of which Egypt moved to defuse one on Monday. [Reuters/Egypt Independent, 4/9/2013]

Al-Azhar unsure about sukuk bill
Al-Azhar’s Senior Scholars Authority held an emergency meeting on Monday to discuss the Shura Council’s bill on sukuk (Islamic bonds), which President Mohamed Morsi sent to them to determine if it is compliant with Sharia. The board discussed the draft law for four hours, and had reservations regarding Article 20, said a source. The article stipulates that the legal committee that would determine whether the sukuk conform to Sharia would be formed by the finance minister, in contradiction with Article 4 of the Constitution, which says that al-Azhar would rule in all matters regarding Sharia. [Egypt Independent, 4/8/2013]

Egypt scraps tax on dividends, investment gains
Egypt will cancel a tax on stock dividends and investment gains from takeovers and will return revenue already levied on one bank tie-up, a government official said on Monday, after protests by investors in the country’s struggling equity market. The Muslim Brotherhood-led government shocked foreign investors last month when it imposed a 10 percent tax on investment gains from the takeover by Qatar National Bank (QNB) of local lender National Societe Generale Bank (NSGB). It had unveiled the tax plans in December as part of austerity measures to control a soaring budget deficit, but had given no indication when it might be applied. [Reuters/Egypt Independent, Ahram Online, 4/8/2013]

US teargas shipment arrives in Suez
A shipment of teargas canisters from the United States arrived at the Abadeya Port in Suez on Sunday, according to official documents obtained by al-Masry al-Youm. Five containers carrying 140,000 teargas canisters were shipped to the Interior Ministry by Aramex International, a courier service based in Alexandria. The shipping documents stipulate that only the Egyptian government may use the canisters, and that they are forbidden to re-export the shipment or sell it to third parties. [Egypt Independent, 4/8/2013]

30 suspects arrested since Khusus clashes: Security source
A source in the Qalyubiya  governorate’s security directorate said that 30 suspects had been apprehended in relation to Saturday’s sectarian flare-up in the city of Khusus, Egyptian state news agency MENA reported on Monday. According to the security source, five suspects had been arrested in possession of weapons and one hundred crates full of Molotov cocktails. The suspects had since been referred to Egypt’s Public Prosecution for investigation, the source said. In the aftermath of the Khusus violence, 15 people were arrested and police surrounded the area. Two men – Islam aged 17 and Ahmed aged 21 – have also been arrested over the attacks on mourners at Abbasiya Cathedral on Sunday. The suspects, aged 17 and 21, were arrested on Monday night and are still being questioned, state news agency MENA reported. [Ahram Online, Egypt Independent, EGYNews (Arabic), 4/9/2013]

Egypt train services resume after strike ends
Egypt’s train drivers ended Tuesday morning their biggest general strike, which had brought the nation’s railway movement to halt since Sunday. Egypt National Railways Authority chief Hussein Zakariya said the strike caused losses worth of nearly LE9 million but that 90 percent of the train’s are running again. He added that the strike ended after the drivers agreed to resume work in exchange for promises to discuss their demands, which include bigger allowances and bonuses equal to those of metro workers, as well as Zakariya’s removal. [Egypt Independent, Ahram Online, 4/9/2013]

Calm prevails by cathedral as Egypt steps down security
Egypt stepped down security by Abbasiya’s Coptic Orthodox Cathedral on Tuesday, withdrawing forces that were deployed there to contain confrontations that erupted in light of a funeral for victims of sectarian violence.  A calm atmosphere prevailed early on Tuesday as traffic flowed smoothly. Security forces have reopened Ramses Street, a major thoroughfare in front of the cathedral, and street cleaners are clearing the rubble left by the night of fighting which left one dead. Several pro-revolution forces, including the leftist Popular Current Party, the liberal Dostour Party, the Revolutionary Socialists and the Social Democratic Party, will march today to the federal palace, passing by the cathedral. The demonstration’s purpose is to protest this recent wave of violence, demand the sacking of the interior minister and call for the punishment of those responsible for the incident. [Ahram Online, DNE, Aswat Masriya, SIS, Shorouk (Arabic), 4/8/2013]

An al-Azhar student faces investigation for being Shi’a
A female student at the al-Azhar College for Girls in Assiut is facing an investigation to ascertain if she is a Shi’a or not. Mahmoud Shehata, dean of the college, confirmed on Monday that the student has been referred to the legal affairs department. He added that if she is found to be a Shi’a then legal action will be taken against her, according to state-affiliated news agency al-Ahram. [Ahram Online, 4/8/2013]

US condemns latest wave of Muslim-Christian violence
The United States Embassy has condemned the violence that broke out in Cairo on Sunday outside the Coptic Orthodox Cathedral and the clashes that led to them in Qalyubiya on Friday. In a statement issued on its official Facebook page, the embassy expressed its "deepest condolences to the friends and families of the Egyptians, both Christian and Muslim, who were killed or injured in the recent violence." The embassy welcomed President Mohamed Morsi’s promise to conduct a full and transparent investigation, emphasizing that it is the responsibility of the state to protect all of its citizens. [Egypt Independent, Aswat Masriya, State Department Briefing, 4/8/2013]

Egypt hosts international meeting on Syria
The Ministry of Foreign Affairs hosted a meeting on Sunday with officials from 10 other countries to discuss the situation in Syria and review the outcomes of the Friends of Syria meeting held in Rome in February. A statement published by the ministry on Sunday night reported that representatives from the United States, the United Kingdom, France, Germany, Italy, Saudi Arabia, the United Arab Emirates, Qatar, Jordan and Turkey attended the meeting. President of the Syrian National Coalition (SNC) Ahmed Moaz al-Khatib was also in attendance. The participants in the meeting expressed their full support for al-Khatib’s efforts to “achieve the goals of the Syrian revolution in attaining liberty, justice, and human dignity”. They also praised “his commitment to preserve a united and inclusive Syria for all Syrians”, and welcomed his “assurances that the coalition remains committed to building consensus amongst all Syrians”. [DNE, 4/8/2013]