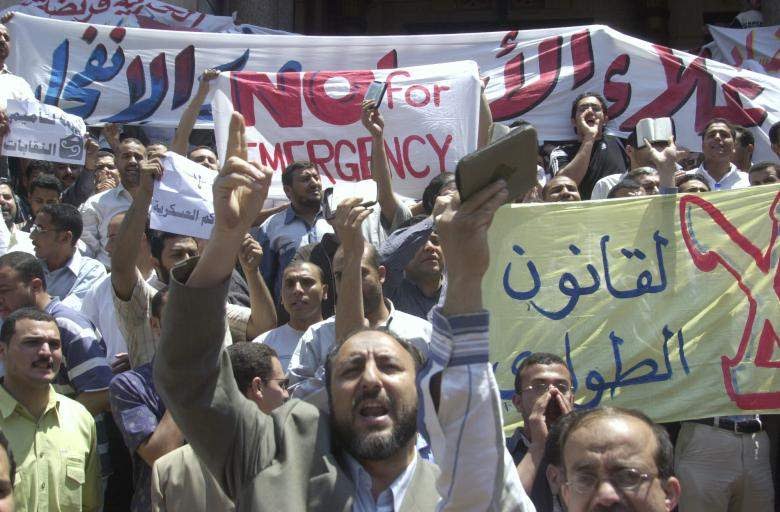 Egypt’s ruling Supreme Council of the Armed Forces (SCAF) announced Thursday afternoon the lifting of the longstanding state of emergency, adding that the military will continue to secure the country until the 30 June transfer of power following the upcoming presidential elections runoff.

On Wednesday, religious leaders in Alexandria endorsed the Muslim Brotherhood candidate and forbade voting for Shafiq, according to the London-based Al-Sharq Al-Awsat newspaper. Yasser al-Borhamy, vice president of the Salafi Dawah, confirmed his group’s support of Morsy during a public meeting held at a Borg al-Arab area mosque on Wednesday. Sherif al-Masry, member of a preachers’ association in Alexandria, forbade voting for Shafiq, emphasizing that the candidate was prime minister during the Battle of the Camel, when armed men on horses and camels attacked Tahrir Square protesters in February 2011. Masry also accused him of involvement in the smuggling of former regime figures’ assets abroad.

In a conference at the Social Democratic Party of Egypt, the participants prepared a document which obligates each candidate to immediately start consultations to form a coalition government that would represent all political forces, including youth, women and Copts, and announce the name of their prime minister before the run-off. It also obliges them to propose a Constituent Assembly that would represent all segments of society, including youth, women and Copts in a pro rata manner. Decisions by the assembly are to be passed by a two-third majority, and its members are to be announced before the run-off. The document recognized the independence of the judiciary and the right of citizens to a civil trial, and called for codifying the status of the armed forces as per the 1971 Constitution, with the military budget to be controlled by Parliament without prejudice against the security and confidentiality of the military. The final version of the document will be announced at a press conference on Friday at the Lawyers Syndicate.

Egypt’s ruling Supreme Council of the Armed Forces (SCAF) announced Thursday afternoon the lifting of the longstanding state of emergency, adding that the military will continue to secure the country until the 30 June transfer of power following the upcoming presidential elections runoff. Human Rights Watch (HRW) urged Parliament to pass legislation insuring that all exceptional measures of the law are suspended. HRW further recommended that the Ministry of Interior release all 188 detainees still being held in Egyptian prisons under Emergency Law provisions and to transfer all trials under the mandate of the Emergency State Security Court (ESSC) to regular civilian courts.

The Muslim Brotherhood is scheduled to meet with secular and liberal political players Saturday to discuss standards for selecting members of a new constitution-drafting assembly. Mohamed Abul Ghar, head of the Egyptian Social Democratic Party, told Al-Masry Al-Youm that secular forces feel the Brotherhood is trying to delay an agreement on the criteria for selecting the Constituent Assembly until after the presidential election. The People’s Assembly Constitutional and Legislative Affairs Committee on Saturday approved a draft law on standards for forming the assembly. Some MPs oppose the draft law, saying it does not stipulate that the assembly adequately represent all segments of society, as agreed upon in previous meetings with military leaders.

In anticipation of a violent reaction to former President Hosni Mubarak’s sentencing, officials unveiled a plan to secure the Saturday session of his trial that includes the deployment of 160 tanks and thousands of police officers. Security forces will also use bomb-sniffing dogs, electronic gates and metal detectors. The former president, his sons Gamal and Alaa Mubarak, and businessman Hussein Salem were also tried for corruption in a separate case heard during the same proceedings, which began last summer. The prosecution has requested the death penalty for Mubarak, a punishment usually carried out by hanging in Egypt. Mubarak’s defense team plans to appeal a potential guilty verdict.

The general assembly of Egypt’s influential Supreme Constitutional Court has agreed to appoint judge Maher al-Beheiry as its chairman, succeeding Farouk Sultan, whose term ends on 30 June. State-owned MENA news service quoted Hatem Bagato, head of the commissioners at the Supreme Constitutional Court, as saying that the court’s general assembly selected Beheiry, the first deputy of the president of the court, to succeed Sultan. The decision will be ratified by either Field Marshal Hussein Tantawi or the country’s new president, Bagato said. Currently, two major laws before the court could have deep political influence. One of them is the elections law, which if ruled unconstitutional, will dissolve the current Islamist-dominated Parliament. The second is the law barring former regime figures, such as Ahmed Shafiq, from running in the presidential election.

Egypt’s major stocks flatlined on Wednesday as reports that the joint chief executives of the country’s leading investment bank will stand trial for corruption put the brakes on a potential market rally. Egyptian state television reported late on Wednesday morning that the two sons of Egypt’s deposed president and the two chief executives of investment bank EFG-Hermes are to stand trial alongside five others for corrupt stock exchange dealings. Gamal and Alaa Mubarak, already standing trial for graft with their father, are being charged with EFG-Hermes co-chief executives, Hassan Heikal and Yasser El-Mallawany. The accusations related to the sale of El-Watany Bank of Egypt (AWB). Foreign investors were the driving force behind the declines, selling LE127.4 million more in stocks than they bought. Non-Egyptian Arabs, however, picked up most of the slack. The verdict in the trial of ousted President Hosni Mubarak, due on Saturday, is yet another cloud hanging over Egyptian stocks.