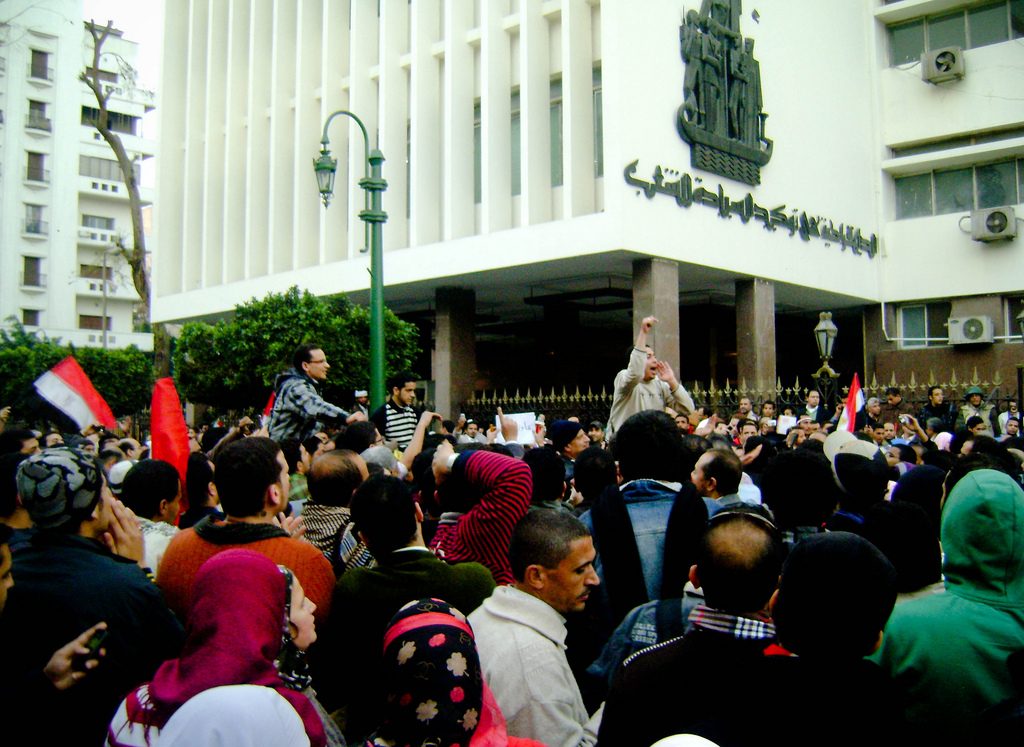 The Egyptian State Lawsuit Authority (ESLA) has appealed a ruling made by the Administrative Court suspending parliamentary elections, which were called for by President Mohamed Morsi in February.

Spokesperson: Cabinet reshuffle ‘off the table’
Cabinet spokesperson Alaa al-Hadidy confirmed Tuesday that a Cabinet reshuffle is “not on the table,” calling rumors to the contrary “speculation.” Several political factions have suggested a Cabinet reshuffle, but their demands have fallen on deaf ears for now. The administration is continuing to carry out its duties, said Hadidy, adding that the president’s office is pleased with Hisham Qandil and his government’s efforts in the face of considerable challenges. [Egypt Independent, Aswat Masriya, 3/12/2013]

New elections law will be ready in 15 days, says FJP
Yasser Hamza, a member of the Freedom and Justice Party’s legal committee, claimed Tuesday that the Shura Council will finalize a new law governing the parliamentary elections within 15 days. The Shura Council’s legislative committee approved a draft law in principle on elections and political rights presented by the Wasat Party. [Egypt Independent, 3/12/2013]

Justice ministry presser tackles private security firms, al-Gendy case
The Egyptian government is currently studying the possibility of using private security firms for domestic policing, Justice Minister Ahmed Mekki said at a Tuesday press conference at which he also discussed the controversial case of slain activist Mohamed al-Gendy. "The interior minister has informed me that the initial forensic report about al-Gendy’s death had shown that he was killed in a car accident," Mekki said. "The interior minister also requested that this information be announced by the prosecution, but I have decided to announce it myself." [Ahram Online, Ahram (Arabic), 3/12/2013]

Opposition front says it was not invited to national dialogue
The National Salvation Front and its members did not receive an official invitation from Egypt’s presidency to attend national dialogue, a front spokesman said. “We welcome the dialogue but we have clear demands and agenda which include reshuffling the cabinet, sacking the chief public prosecutor, forming a committee to amend the constitution and amending the election law,” spokesman Khaled Dawood said. In interview aired on Tuesday, leading NSF member, Mohamed ElBaradei, said that the state is collapsing, adding that Egypt is now “at the bottom of the barrel.” Meanwhile, ElBaradei, also a founder of the Dostour Party, was named its honorary president after deciding he would not run for the post during internal party polls scheduled for September. [Aswat Masriya, | Egypt Independent, 3/12/2013]

Egypt Presidency appeals parliamentary elections suspension
The Egyptian State Lawsuit Authority (ESLA) has appealed a ruling made by the Administrative Court suspending parliamentary elections, which were called for by President Mohamed Morsi in February. The ESLA appealed the ruling on behalf of the Egyptian president, the minister of justice and the head of the Shura Council, Egypt’s upper house of parliament, which temporarily holds legislative powers. The Supreme Administrative Court (SAC) has scheduled a hearing for the appeal on 17 March. The hearing will combine the president’s appeal with another already submitted by former MP Mohamed al-Omda. ESLA’s decision was the cause of controversy among members of the Shura Council’s Constitutional and Legislative Affairs committee. [Ahram Online, Egypt Independent, Reuters, AP, SIS, EGYNews (Arabic), 3/13/2013]

Three accused of attempting to torch Muslim Brotherhood headquarters
Five detainees arrested for attempting to torch the Muslim Brotherhood headquarters in Moqattam were released on an EGP 500 bail on Tuesday. Eight people were arrested by Muslim Brotherhood members alongside the police on Sunday hours after the prosecutor general highlighted a law that allows citizens to arrest those who vandalize public and private property, block roads, and prevent public officials from carrying out their duties, among other crimes. Egypt’s Coalition for Child Rights (ECCR) denounced on Tuesday the act, as four children were among those arrested. [DNE, Ahram Online, Aswat Masriya, 3/12/2013]

Ministry expects LE300 bn worth of investments next year
Minister of Planning and International Cooperation Ashraf al-Araby said that the volume of governmental and private investments is expected to reach around LE300 billion by financial year 2013-2014. Araby said Tuesday that the new economic plan is expected to be finished within 10 days, and will then be put up for public comment. According to Araby, the new economic development plan next year’s plan is expected to be concluded in 10 days to be reviewed by society once finished. [Egypt Independent, 3/12/2013]

Egypt’s wheat stocks decline amid political crisis
Strategic stocks of wheat held by top global importer Egypt stand at 2.207 million tons from international and local markets, enough to last 89 days, a cabinet report said on Wednesday. That compares with stocks of 2.292 million tons, or 95days cover, reported on February 27. Egypt’s wheat imports are sharply down this year as the country struggles through a political and economic crisis. “The total strategic stocks of local and imported wheat have reached 2.207 million tons, enough for 89 days until June 9,2013,” a report by the cabinet said. [Al Arabiya/Reuters, 3/13/2013]

Interior Ministry says police gun use will increase "gradually"
An Interior Ministry official said Thursday that gun use among police and security forces will increase “gradually.” Abdel Fattah Othman, the head of the ministry’s general administration for media and public relations, said the Police Authority Law allows members of police to use arms in the defense of public buildings in a Facebook post.  Othman added that the ministry “will not back away from its role to protect state establishments and will confront [any attempts of vandalism]” or “be involved in attempts to creating division between the ministry and Egyptians.” [Egypt Independent, DNE, 3/12/2013]

Islamists form community police militias
Jama’a al-Islamiya and the Muslim Brotherhood announced Tuesday that they are working to form groups known as the civilian police in cooperation with other Islamist groups. The militias will be able to arrest people they deem to be criminals or breaking laws. Ahmed al-Iskandarani, a spokesman for the Jama’a al-Islamiya’s Construction and Development Party, said the groups would not take action if police were on the streets. However, should police call for further strikes or withdrawals, community police groups would step in under the supervision of the Interior Ministry. “This system is applied in other countries,” he said. To garner further support for the militias, the organizers have issued an open call online. [Egypt Independent, Ahram Online, 3/12/2013]

Director: NSA bans film on Egyptian Jews
Egyptian security agencies have stopped the screening of a documentary on the Egyptian Jewish community a day before it was due to debut in local cinemas, the film producer said in a statement Tuesday. He said no reasons were given. The "Jews of Egypt", a documentary that follows the lives of the Egyptian Jewish community in the first half of the 20th century until they left under duress in large numbers in the late 1950s, was screened in Egypt last year in a private film festival and had been approved by censorship, a regular procedure in Egypt. "Banning the film after gaining the regulatory approval twice is a barefaced encroachment by the National Security Agency," said the director. [Egypt Independent, AP, 3/13/2013]

Muslim Brotherhood shot down in SU elections
In student union elections Monday, opposition parties dominated over the Muslim Brotherhood at Mansoura, Cairo, Helwan and Aswan universities. At Mansoura University, the student coalitions, composed of students from a number of opposition parties including al-Dostour, the Popular Current and 6 April Movement, won the majority of the seats for the faculties of law, engineering, science and commerce. By contrast, the MB claimed 11 seats out of a total of 224 between these four faculties, with none at all in the Faculty of Science. Their greatest success was in the Faculty of Arts where they managed to claim 22 seats out of 56. [DNE, 3/12/2013]

Port Said ends civil disobedience, weak response in schools
Despite calls for schools to resume classes, many parents have kept their children at home in Port Said, said an Aswat Masriya witness. In mid-February, hundreds of residents started a civil disobedience, demanding justice and an apology from the president and his administration for what they believe is negligence of their demands. Almost all schools have suspended classes since the beginning of the civil disobedience. Most companies, factories and government facilities resumed work at a normal pace in Port Said, after the Armed Forces assumed the responsibility of securing the governorate. [Aswat Masriya, 3/12/2013]

Foreign Ministry in talks over release of 4 Coptic detainees in Libya
An unnamed diplomat said Tuesday that the Foreign Ministry is in daily contact with four Egyptian detainees in Libya accused of preaching, according to Turkish Anadolu news agency. “Our consul visits the remaining four every day and there are no complaints of ill-treatment,” said the diplomat on the condition of anonymity. Libyan authorities arrested dozens of Egyptian Copts last month in Benghazi on charges of preaching Christianity and illegally entering the country. The arrests were amid protests and clashes with Muslim residents in Benghazi and Misrata, who also attacked Coptic churches. [Egypt Independent, 3/12/2013]

Egypt’s president Morsi to attend Arab League Summit
Egypt President Mohamed Morsi will attend the 24th Arab League Summit, expected to take place in Doha, Qatar on 26 and 27 of March. According to al-Ahram Arabic-language news website, Morsi said that he is looking forward to what can be achieved at the summit noting how critical and challenging a period for it is for the region. [Ahram Online, 3/12/2013]