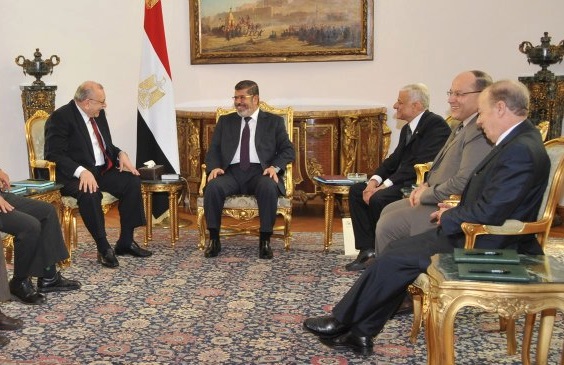 Egyptian President Mohamed Morsi has told Egypt’s top judges that he would personally adopt their proposals for a new judicial authority law in hopes of containing mounting tension between Egypt’s Islamist forces and the judiciary.

Morsi’s office ‘surprised’ at claims it restricts media access
The office of Egypt’s president has expressed its “surprise” at recent accusations that it restricts the work of journalists issued with permits in order to cover its work. The office said in an official statement on Monday that “[this] contradicts the rules [the office] follows while working with journalists, whom the presidency respects and is keen on communicating with.”   Head of Egypt’s journalists syndicate Diaa Rashwan recently criticized the presidency, saying that it restricts the work of journalists. Rashwan said in an interview that the presidency "withholds information" and that the president’s media office “has refused to approve several significant newspaper representatives, saying that they are ‘troublesome.’” [Ahram Online, SIS, 4/29/2013]

Egypt presidency, judiciary draw closer on proposed legislation
Egyptian President Mohamed Morsi has told Egypt’s top judges that he would personally adopt their proposals for a new judicial authority law in hopes of containing mounting tension between Egypt’s Islamist forces and the judiciary. After nearly three hours of talks, the president’s office and the Supreme Judicial Council said they had agreed to launch a conference on the future of the justice system that would work out a reform acceptable to both sides. Morsi agreed with judicial leaders on Sunday to have them draft their own new judicial law that he will endorse and present to the Shura Council. Meanwhile, the Wasat Party has not withdrawn its proposals to amend the judicial authority law and has no plans to do so in future, the party has said. A march scheduled for Monday against the draft judicial authority law has been postponed. Opposition groups decided to cancel the march, planned to finish at the Shura Council, after President Mohamed Morsi met senior judges on Sunday in a bid to defuse a dispute over the draft law. [Ahram Online, Reuters, DNE, SIS, AP, IkhwanWeb, 4/29/2013]

Nour Party delegation travelling to Washington DC for the first time next week
For the first time since its formation, a delegation of the Salafi Nour Party will be travelling to Washington DC to meet with US officials and representatives of the Egyptian community. The delegation aims to inform US officials of the party’s vision for Egypt, as well as to dispel any preconceived notions both US officials and members of the Egyptian community may have about the party’s parent organization, the Salafi Call. [El Watan (Arabic), 4/29/2013]

Egypt court retracts minister’s decision to suspend "Tahrir preacher"
Egypt’s administrative Disciplinary Court halts an order to suspend Sheikh Mazhar Shahin, who is well-known for leading prayers in Cairo’s Tahrir Square during and after Egypt’s 18-day uprising in 2011. The charges against him included criticizing President Mohamed Morsi and the Muslim Brotherhood. The Disciplinary Court’s cancellation of the endowment ministry’s order, however, annuls any consequences of the suspension, even including any salary withheld. [Aswat Masriya,  Ahram Online, 4/29/2013]

Egypt court upholds detention period for Mubarak
A Cairo court upheld Sunday a 15-day detention period for former president Hosni Mubarak, which he had appealed, in relation to a corruption case brought by the illicit Gains Authority.
The media was not allowed in court in Mubarak’s appeal session Sunday on the order of the presiding judge. The 84-year-old former president would not have been released if he had won the appeal as he faces detention orders in two other corruption cases in which he is accused of making private use of state money allocated for renovating presidential palaces, and of receiving gifts from state newspapers. [Ahram Online, Aswat Masriya, DNE, 4/28/2013]

Court postpones Abdallah bench recusal request
Cairo Court of Appeals on Sunday adjourned Prosecutor General Tala’at Abdallah’s request for the recusal of the court bench that reversed his appointment until Tuesday. The request resulted in the temporary suspension of the removal order on Abdallah until the case is resolved. Meanwhile, the Egyptian Center for Economic and Social Rights asked the Supreme Judicial Council to lift Abdallah’s immunity, and that of the head judge of the Court of Cassation, for failing to implement the amnesty law that absolves defendants of wrongdoing during the 18-day uprising. [DNE, Al Masry Al Youm (Arabic), 4/29/2013]

Egypt may be 65-70 pct self-sufficient in wheat this year
Egypt may reach 65 to 70 percent self-sufficiency in wheat production this year because of an expected boost in the local harvest, the prime minister said on Saturday. Egypt usually imports around 10 million tons of wheat a year but this year the state says it will buy only around 4 to 5 million tons from abroad, hoping to get the rest from local production. Prime Minister Hisham Qandil said there were indications this year’s crop could reach 9.5 million tons, echoing predictions by other officials. [Reuters, 4/27/2013]

Striking Egypt police close security HQs in Ismailia, Kafr al-Sheikh
A police strike on Sunday closed security directorates in the Suez Canal city of Ismailia and Upper Egypt’s Kafr al-Sheikh. Dozens of security personnel and low-ranking officers in Ismailia protested against "deteriorating living standards and inadequate weapons." They also called for Interior Minister Mohamed Ibrahim to resign, according to al-Ahram’s Arabic-language news website. In Kafr al-Sheikh in Upper Egypt, meanwhile, dozens of police personnel closed the gates of the local security directorate and hung banners calling for the sacking of the interior minister. Protesters, who prevented other directorate employees from entering the building, voiced opposition to what they describe as the "Brotherhoodization" of the interior ministry, state news agency MENA reported. [Ahram Online, 4/28/2013]

Students protest across Egypt
Students across Egypt took to the streets on Sunday in protest at the aggressive handling of student movements by security forces and university staff, as well as the gross neglect of students’ needs by universities. Clashes have been reported at several universities, including Ain Shams and Alexandria. Muslim Brotherhood students have issued a statement demanding the formation of a fact-finding committee by the ministry of education to discover who was responsible for recent violence on university campuses. Several recent deaths on campuses should be investigated and new security measures should be established to protect students, the statement added. Cairo University students who live in the university’s dormitories banned staff from entering the dormitory’s administrative buildings on Monday morning for the second day, demanding better student services, an ambulance service in case of emergencies, and sacking of higher education minister. [DNE, Ahram Online, IkhwanWeb, 4/29/2013]

Egypt minister must resign over offensive talk: Journalists union head
In an interview on Saturday, the head of Egypt’s journalists syndicate Diaa Rashwan blasted the Minister of Information Salah Abdel-Maqsoud’s “inappropriate” comments to female journalists, demanding  his resignation. Meanwhile, scores of women gathered at Maspero, the headquarters of the Egyptian Radio and Television Union, on Sunday afternoon to protest against Abdel Maqsoud. Several Egyptian women’s movements, including Fouada Watch, Baheya Ya Masr and Shoft Tahrosh (I have seen harassment) called for a demonstration in protest to Abdel Maqsoud’s remarks to a female journalist on Thursday in a press conference. [Ahram Online, DNE, 4/28/2013]

Labor strikes and protests double under Morsi
Labor strikes and social protests have more than doubled since President Mohamed Morsi’s election and are likely to continue doing so, a study shows. A report published on Sunday by the Egyptian Centre for Economic and Social Rights (ECESR) about labor movements during 2012 shows that most of the year’s 3,817 labor strikes and economically motivated social protests happened following Morsi’s election. The report blamed Morsi’s government for not issuing a law for independent unions and syndicates despite their being a draft submitted back in 2011 by former labor minister, Ahmed al-Borai. [DNE, 4/28/2013]

Morsi aide discusses Syria crisis with Ahmadinejad
Egyptian presidential aide for foreign affairs Essam al-Haddad and the presidency’s chief of staff Rifa’a al-Tahtawi met Sunday in Tehran with Iranian President Mahmoud Ahmadinejad to discuss Egypt’s initiative on the Syrian crisis. An Iranian Foreign Ministry statement said they agreed on "the necessity of an action plan…to act on the Egyptian president’s plan on the Syria crisis through an acceptable political solution which can help end the violence and help national reconciliation with the participation of the people of Syria". [Ahram Online, Reuters, DNE, 4/28/2013]

Libya to help ease Egypt crisis with $1.2 bln oil deal; Egyptians enter Libya illegally
Libya will soon start shipping oil to neighboring Egypt on soft credit terms, two senior Libyan officials said, as Cairo struggles to pay for energy imports and avoid fuel shortages. The officials told Reuters that Tripoli would supply Cairo with $1.2 billion worth of crude at world prices but on interest free credit for a year, with the first cargo expected to arrive next month. Tripoli has already deposited $2 billion at the Egyptian central bank and Qatar has announced $8 billion in loans, grants and other deposits since Islamist President Mohamed Morsi was elected last June. The Ministry of Foreign Affairs announced on Sunday that over 4,000 Egyptians have entered Libya illegally this year due to deteriorating economic conditions. [Reuters, DNE, 4/29/2013]