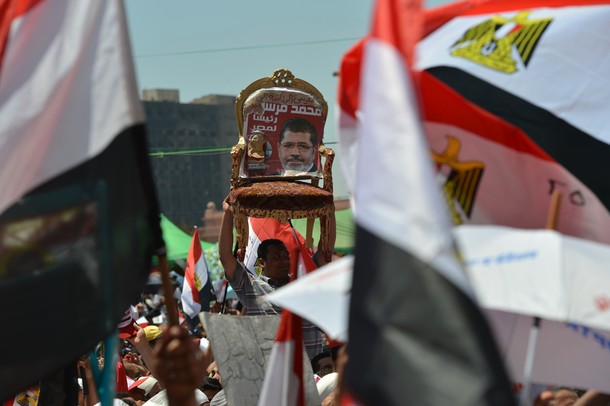 Egypt’s president-elect plans Friday to address thousands who have camped out in Cairo’s Tahrir Square to demonstrate against the military’s hold on power despite the election of a new civilian leader, a nod to the protesters who supported his bid for leadership. Morsi’s spokesman, Yasser Ali, said the president-elect wants to stand with the thousands who have been in the square for over a week to express concern about the power grabs.

[Associated Press, Egypt Independent, Ahram Online, El Watan (Arabic), 6/29/2012] Egypt’s president-elect plans Friday to address thousands who have camped out in Cairo’s Tahrir Square to demonstrate against the military’s hold on power despite the election of a new civilian leader, a nod to the protesters who supported his bid for leadership. Morsi’s spokesman, Yasser Ali, said the president-elect wants to stand with the thousands who have been in the square for over a week to express concern about the power grabs. Morsi’s first test in his power struggle with the generals will be the venue of his oath-taking ceremony. He will be sworn in before a high court Saturday. Traditionally, presidents are to be sworn in before parliament. For many of the protesters, Morsi’s swearing-in before the court, as dictated by the generals’ constitutional declaration, was a concession to the military. Ali said Morsi’s agreement to take oath before the court does not mean the battle to regain his powers is over. (EDITOR’S NOTE: Morsi is due to speak at 6pm Cairo time according to FJP sources.)

[Ahram Online, 6/29/2012] Egypt’s ruling Supreme Council of the Armed Forces (SCAF) will undergo a minor personnel reshuffle, Al-Ahram’s Arabic-language news website reported on Thursday. Some council members are expected to leave the SCAF after reaching the legal retirement age. A full list of the council’s 19 members is expected to be announced Thursday evening. According to the Al-Ahram report, General Hasan El-Ruweini will be named deputy defence minister and will no longer serve as commander of Egypt’s central region.

[Egypt Independent, 6/29/2012] Dozens of activists and political and public figures held a press conference on Thursday to announce a new front called the Third Current, which aims to preserve the civil state. The conference was attended by representatives of the campaigns of former presidential candidates Amr Moussa, Hamdeen Sabbahi and Khaled Ali, as well as politicians, lawyers and former MPs. In a statement issued by the founders declared that the Third Current’s aim is to “defend basic rights and freedoms, and to be an effective political opposition group.”

[Egypt Independent, 6/28/2012] Al-Masry Al-Youm has received a copy of the investigation into the destruction of confidential files kept by the now-dissolved State Security Investigations Services (SSIS). Forty-one defendants in the case have been put on trial. The Justice Ministry assigned Judge Mohamed Shawky the case. On Tuesday, Shawky decided to put on trial former SSIS head Hassan Abdel Rahman, his deputy Tareq Abu Gheida and 39 other security branch heads from different governorates.

[Egypt Independent, 6/28/2012] Judge Osama al-Saidi has begun investigating complaints submitted by former MP Essam Sultan accusing Ahmed Shafiq of squandering public funds. Saidi, who was assigned the investigation by the Justice Ministry, has dispatched a committee of experts to the Bitter Lakes district in Ismailia to inspect the land that Shafiq had allegedly allocated to the former president’s sons, Alaa and Gamal Mubarak, when he was minister of civil aviation. It is alleged that Shafiq sold the land for a price lower than its real value, which is considered a deliberate waste of public funds. Shafiq, who lost in the presidential runoff to the Muslim Brotherhood’s Mohamed Morsy, flew to the United Arab Emirates following the official announcement of the election results.

Egypt sends copy of ruling against Salem to Spain

[Egypt Independent, 6/28/2012] The Cairo Criminal Court sentenced former Petroleum Minister Sameh Fahmy and Salem to 15 years in prison on Thursday for their involvement in Egypt’s gas deal with Israel. Spokesperson for the public prosecution Adel al-Saeed said Thursday that once the ruling was issued against Salem, a copy of the ruling was sent to Spain as part of the extradition request. A Spanish national court had ordered the handover of Salem on the grounds that he exploits his Spanish nationality to evade extradition.

[Al Ahram Gateway (Arabic), Egypt Independent, 6/29/2012] The Foreign Ministry has summoned Mohamed bin Nakhira, the United Arab Emirates’ ambassador to Egypt, to clarify statements made by the Dubai police chief on his Twitter that are alleged to have insulted the Muslim Brotherhood and its followers, said ministry spokesperson Amr Roshdy on Thursday. Dahi Khalfan, Dubai’s chief of police, allegedly published comments criticizing the Muslim Brotherhood’s Mohamed Morsy’s ascension to the presidency. Previously, Khalfan had accused the Brotherhood of wanting to capture power in oil-rich Gulf countries. The Coalition of Egyptian Revolutionaries has called on the UAE to dismiss Khalfan and issue a formal apology.

U.S. Ambassador in Cairo: Washington supports the peaceful transition of power in Egypt

[Al Ahram (Arabic), 6/29/2012] U.S. Ambassador Anne Patterson in Cairo confirmed that the U.S. government is keen to support the peaceful transition of power in Egypt, and would help the new government nurture an environment for competitiveness business in Egypt. She stressed that democracy offers opportunity for all types of entrepreneurs and that an open economy would promote foreign direct investment and the tourism sector which would provide thousands of jobs.