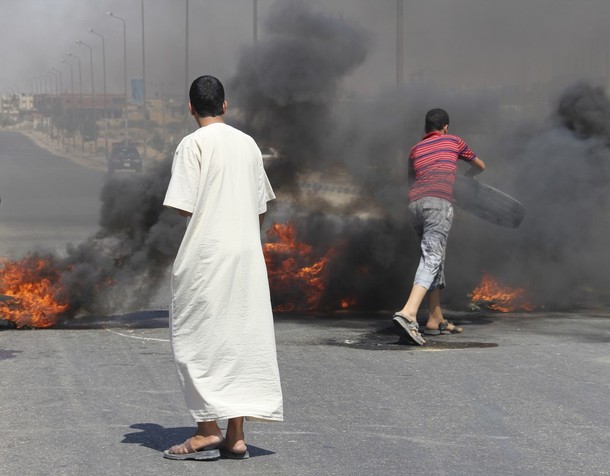 Egypt branded Islamist gunmen who killed 16 police near the Israeli border as "infidels" and promised on Monday to launch a crackdown following the massacre that strained Cairo’s ties with both Israel and Palestinians. An Egyptian official has said "Jihadist elements" crossed from the Gaza Strip into Egypt before leading the assault on a border station.

[Reuters, AFP, Al Masry Al Youm (Arabic), 8/6/2012] Egypt branded Islamist gunmen who killed 16 police near the Israeli border as "infidels" and promised on Monday to launch a crackdown following the massacre that strained Cairo’s ties with both Israel and Palestinians. An Egyptian official has said "Jihadist elements" crossed from the Gaza Strip into Egypt before leading the assault on a border station. They then stole two armored vehicles and headed to nearby Israel, where they were killed by Israeli fire. Egypt’s military, which still holds many levers of power in the most populous Arab nation, called the attackers "infidels" and said it had been patient until now in the face of the instability in Sinai. Egypt announced it was closing its border crossing into Gaza "indefinitely", cutting off the sole exit route for most Palestinians at the height of the Muslim-fast month of Ramadan. Hamas said it was working with Egypt to try to identify those behind the bloody operation. Some accused Israel of orchestrating the attack to enforce a de facto blockade on Gaza. Gunmen who launched a deadly assault on an Egyptian border post near Israel on Sunday were backed by mortar fire from the Gaza Strip, the Egyptian army has said.

[AP, Al Shorouk (Arabic), 8/5/2012] Egypt’s President Mohammed Morsi on Saturday gave a lengthy speech to the army in praise of its role during the run-up to his election, proclaiming that he, his government and the powerful generals will cooperate for the future.

Speaking with the head of the armed forces, Field Marshal Hussein Tantawi by his side, and hundreds troops including generals in the audience, Morsi stressed his legitimacy as Egypt’s first popularly elected president, but also acknowledged that his ascension to the office would have been impossible without the military’s support.

[Egypt Independent, 8/5/2012] Presidential spokesperson Yasser Ali said appointing former Prime Minister Kamal al-Ganzouri as an adviser is not a revocal of President Mohamed Morsy’s previous criticisms of him. In response to questions from state-run Al-Ahram newspaper Saturday as to why Morsy and the Freedom and Justice Party attacked Ganzouri’s cabinet ahead of elections and then appointed him as an adviser, Ali said that criticizing the former prime minister does not mean underestimating his national and economic value. Morsy granted Ganzouri Order of the Republic on Thursday and appointed him as an advisor, a step that stoked controversy in some quarters.

[Al Shorouk (Arabic), 8/6/2012] The spokesman for the Constituent Assembly, Dr. Wahid Abdel Meguid, said that considerable progress been made in the discussion of articles related to freedom of the press and media in the Assembly, and resulted in the development of proposals for three major articles. Article 1 states that the freedom to issue newspapers to individuals and legal persons of public, private and political parties is guaranteed upon notification in accordance with the law regulating the establishment of broadcasting stations, radio, television and digital media. Article 2 provides that the freedom of the press, printing, publication and mass media shall be guaranteed, and limits censorship except in times of war time. Article 3 provides that the State shall guarantee the independence of newspapers and media owned or sponsored, as a platform for national dialogue between the various views and political trends and social interests.

Over 1,200 Egyptians missing since the revolution began, says campaign

[Ahram Online, 8/4/2012] More than 1,200 Egyptians have been reported missing since 25 January 2011, human rights campaigners said on Saturday as they launched an initiative to track down the disappeared. The campaign, ‘We Will Find Them,’ plans to create a database with full details of all those who have gone missing since the start of the January 2011 uprising. Some of the missing are thought to have been participating in anti-regime protests and may have been arrested, while other disappearances have little explanation.

Copts have not been forcefully displaced from Egypt village: presidency

[Ahram Online, 8/5/2012] Dashour’s Copts have not been forced to migrate following recent clashes, said presidential office spokesperson Yasser Ali Saturday. Those Copts who left the town were motivated by fear of future clashes. Ali said President Mohamed Morsi had received reports stating that Copts were not forced to leave but did so of their own volition. Copts who have suffered material damages will be compensated, Ali said, adding that the president also contacted Al-Azhar’s grand imam and the acting Coptic pope to intervene to end the crisis. On Sunday evening, dozens of Copts protested in front of the Presidential Palace in Heliopolis, Cairo, against the forced migration of Christians in Dahshur, Giza.

[Ahram Online, 8/5/2012] Mervat El-Tellawi, secretary-general of the National Council for Women (NCW), said Saturday after meeting with President Morsi that although she was disappointed with the low number of women in the newly-appointed Cabinet, she "strongly felt" during her talks with the president that he supports the cause of Egyptian women and is willing to meet their demands. "The president discussed the status of women in Egypt as well as the status of the council, and talked about the issue of development of women in rural areas. Asserting that women are the true indicator of success in achieving social justice," El-Tellawi said in a news conference following her meeting with Morsi Saturday afternoon.

[Egypt Independent, 8/5/2012] The government is in contact with the International Money Fund to resume negotiations on a US$3.2 billion loan to Egypt, Finance Minister Momtaz al-Saeed said Sunday. In a joint press conference with Local Development Minister Osama Saleh after a Cabinet meeting of economic officials, Saeed stressed that the goal is not the loan itself, but a certificate allowing international institutions to give Egypt grants and loans, thereby reflecting confidence in the Egyptian economy. The minister expected that the IMF managing director Christine Lagarde will visit Egypt soon to resume negotiations with Egyptian officials for the loan. Negotiations were put on hold in May due to lack of political consensus on the loan within Egypt.

Sinai incident behind the drop in Egyptian market

[Al Masry Al Youm (Arabic), 8/6/2012] Egyptian stock indexes tumbled in early trading Monday, as a reaction to the recent attack, which occurred Sinai, Sunday, killing and wounding a number of Egyptian soldiers. The main index « EGX30 » fell by 1.24%, after losing about 62 points, reaching 4972 points, down from the 5000 point level crossed in trading last week after stocks rallied due to greater investor confidence.

Australian Foreign Minister Bob Carr announced on Sunday that Australia will be sending humanitarian aid to Syrian refugees scattered across Syria’s neighbouring states, according to a press release posted on the Australian Foreign Ministry’s official website. Donations to Syrian refugees are similarly coming from Egypt. The neighboring states include Turkey, Lebanon, Jordan and Iraq, where most Syrian refugees flee and where most humanitarian aid targeting them is distributed, but increasingly large numbers of Syrian refugees are also fleeing elsewhere. In Egypt alone, the number of Syrian refugees reached an estimate of 15,000 two weeks ago, according to a refugee legal aid team in Cairo. Due to Egypt’s domestic refugee laws, asylum seekers do not have a right to receive free educational and medical assistance, unlike other countries.

Photo Credit: AP / Angered by the attack Sunday evening that left at least 16 on Egyptian soldiers dead, residents of Rafah protest by burning tires in the road on the outskirts Rafah, Egypt