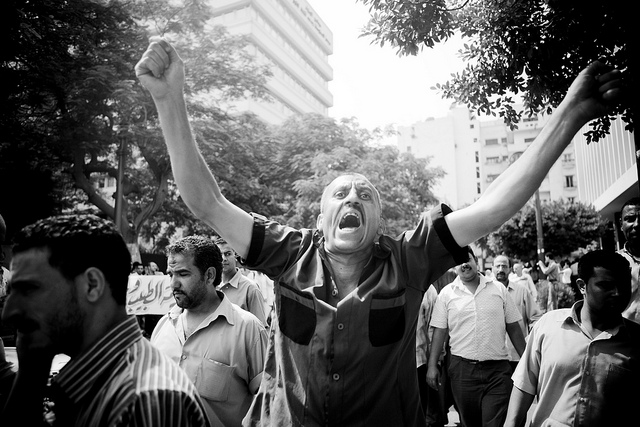 On Wednesday, Egyptian workers will celebrate the first Labor Day since the election of President Mohamed Morsi, by voicing longstanding demands and unfulfilled promises. A march organized by dozens of political parties, movements and labor organizations saw thousands of workers march from Sayyeda Zeinab near downtown Cairo to the Shura Council.

Presidency: Cabinet reshuffle to rely on efficiency
Egypt’s presidential spokesman Omar Amer announced on Wednesday that negotiations with different parties and political forces are still ongoing regarding the awaited cabinet reshuffle. On 20 April, President Mohamed Morsi stated in an interview with Al Jazeera that Egypt’s cabinet would be reshuffled "soon," although he declined to specify which ministers would be replaced. “The ministerial reshuffle will be announced soon,” said Amer during the press conference held at the presidential palace refusing to reveal any name of any of the nominated ministers." Notably, Amer has again reaffirmed that the reshuffle will not include Prime Minister Hisham Qandil. [SIS, Ahram Online, 4/30/2013]

Morsi addresses workers ahead of Labour Day
President Mohamed Morsi spoke to engineers and workers at a new steel and iron plant in Helwan on Tuesday, one day before Labor Day. In his address, he emphasized the importance of workers and the steel sector specifically in bolstering the Egyptian economy. Morsi called on workers to continue performing their duties to support Egypt and the various sectors that rely on their work. He also mentioned plans the government had to create thousands of jobs in the iron and steel sector over the next three years, as well as plans to halt the government’s privatization policy. In a statement on Wednesday, Prime Minister Hisham Qandil reiterated the government’s commitment to improving workers’ conditions, labeling it one of the government’s “high priorities.”  [DNE, Aswat Masriya, Ahram Online, SIS, Ahram (Arabic), Shorouk (Arabic), 5/1/2013]

ElBaradei: Egypt leader will need opposition help
Egypt’s leading opposition leader Mohamed ElBaradei said Tuesday he believes the Islamist president will eventually be forced to reach out to the opposition because his group is losing support and isn’t able to tackle the country’s myriad problems alone. ElBaradei said members of the dominant Muslim Brotherhood "live in a delusion" if they think they can manage the country on their own, describing them as a "minority." He said that if the opposition were to enter elections now, it could win a large chunk of parliament, even a majority. He added that Egypt’s government must seek political compromise to win broad support for a crucial IMF loan and revive the country’s ailing economy. [Reuters, AP, 4/30/2013]

Egypt prosecutors call for investigation of Judges Club head
Prosecutors have asked Egypt’s Supreme Judicial Council to lift judicial immunity from Egyptian Judges Club head Ahmed al-Zend so that the latter might be investigated on charges that he had encouraged foreign interference in Egypt’s affairs. Meanwhile, the Judges Club board and members of the Supreme Judicial Council (SJC) met at the High Court in Cairo to discuss whether they would take part in the judicial reform conference called for by President Mohamed Morsi. After the meeting, al-Zend announced the club’s decision to invite Morsi to a meeting with judges to solve the current judiciary crisis. [Ahram Online, DNE, 4/30/2013]

Egyptian activist Ahmed Douma detained for insulting president
Egyptian prosecutors in the Nile Delta city of Tanta ordered the detention of activist Ahmed Douma on Tuesday for four days, pending investigations into charges of "deliberately spreading false news and rumors" during two recent television appearances. Douma was accused of calling Morsi a criminal and a murderer, alleged statements the charge sheet said could damage the public opinion of the president. According to Douma’s official Twitter account, he is accused of insulting the president by calling him a killer, a criminal, and saying he is wanted by the state. [Ahram Online, Reuters, Shorouk (Arabic), 4/30/2013]

Admin Court: Unenforced rulings constitutional responsibility of president
The Alexandria Administrative Court ruled on Wednesday to cancel the government’s decree preventing the implementation of the court verdict issued in favor of a member of the teachers’ union against the Ministry of Education. The ruling allowed salary and bonuses denied to the plaintiff while working for the Ministry of Education in Alexandria. The court explained that "the non-implementation of judicial rulings of any party or authority in the state represents a serious breach of the principle of separation of powers, and remains primarily the responsibility of the President. Under article 132 of the new Constitution assigns him as arbiter between the authorities, and it is incumbent on him to order the implementation of these provisions." [Shorouk (Arabic), AMAY (Arabic), Ahram (Arabic), 5/1/2013]

Interior ministry denies threatening Islamists
The interior ministry denied reports, prompting a call by some Islamic groups to protest, that the national security sector resumed practices persecuting Islamists. Such reports come in the context of Islamists accusing security officials of targeting them and threatening to kill them. The ministry said in a statement that those calls are based on unfounded allegations, and that the ministry is committed to maintaining the law and respect for human rights, and remaining apolitical. The statement added that ministry’s policy does not compromise freedoms of citizens and is committed to its mandate entrusted with fighting terrorism and espionage, gathering information, and cooperating with state agencies to maintain national security [Ahram (Arabic), Shourouk (Arabic), 5/1/2013]

Egyptian workers to press for revolution’s demands on Labor Day
On Wednesday, Egyptian workers will celebrate the first Labor Day since the election of President Mohamed Morsi, by voicing longstanding demands and unfulfilled promises. A march organized by dozens of political parties, movements and labor organizations saw thousands of workers march from Sayyeda Zeinab near downtown Cairo to the Shura Council. “Our march is demanding the enforcement of the main goal of the revolution, which is social justice,” renowned labor activist Kamal al-Fayoumi told Ahram Online. Egypt’s Mahalla textile workers staged protests to denounce what they called deliberately marginalizing them and not responding to their demands. Steel workers reacted to President Morsi’s speech, ridiculing his call to increase productivity without adequate investment in modernizing and developing the steel plants. [Aswat Masriya, Ahram Online, Shorouk (Arabic), Shorouk (Arabic), 5/1/2013]

Al-Azhar to form committee after mass food poisoning, 10 officials charged
Following an outbreak of food poisoning among students of Al-Azhar University in Cairo, Al-Azhar’s Grand Imam Ahmed al-Tayyeb ordered on Tuesday the formation of a committee to supervise the university campus and create a plan for enhancing services. The decision came during al-Tayyeb’s meeting with Al-Azhar’s student union, after 179 students were admitted to hospital on Monday and Tuesday after eating at the university dormitory. Meanwhile, the first district attorney in East Cairo’s prosecution office has announced that ten defendants accused of culpability in a mass outbreak of food poisoning at al-Azhar University on 1 April will stand trial on 15 May. The head of the university’s dormitory as well as the dormitory kitchen manager and eight others are charged with negligence and violating regulations. [Ahram Online, 5/1/2013]

US congressional delegation reaffirms support for Egypt
A US congressional delegation reaffirmed Washington’s support for Egypt on Tuesday during its meeting with President Mohamed Morsi. The delegation, headed by Chairperson of Intelligence Committee Senator Dianne Feinstein, said that Egypt’s stability is key to the stability of the region. The delegation and the Islamist president discussed the situation in the Middle East, particularly in relation to peaceful settlements of conflicts in the region. Meanwhile in Washington, US Secretary of State John Kerry and Egyptian Foreign Minister Kamel Amr discussed bilateral relations between the two countries, as well as discussing the current situation in Syria. [Aswat Masriya, Shorouk (Arabic), 5/1/2013]

Presidency: Egypt committed to Non-Proliferation Treaty
The presidency said in a press statement that Egypt did not withdraw from the nuclear Non-Proliferation Treaty, and Egypt is committed to its obligations towards this Treaty. Spokesman of the presidency Ambassador Omar Amr said Egypt walked out Monday 29/4/2013 of the second session of the Preparatory Committee for the United Nations Non-Proliferation Treaty (NPT) Review Conference in Geneva, which started its meetings in Geneva on April 22. The move came to protest against the failure of the conference to implement resolution 1995 setting up a nuclear weapon-free zone in the Middle East. In related news, Electricity and Energy Minister Ahmed Imam said that Egypt and the United Arab Emirates (UAE) are going to establish nuclear plants stressing its economic and developmental benefits. [SIS, 5/1/2013]

Qatari PM meets with Morsi; Qatari government reviews investment projects
Prime Minister Hamad bin Jassim al-Thani arrived in Cairo on Tuesday for a quick visit on his way back from New York City. Minister of Aviation Wael al-Maadawy received him at Cairo International Airport. The Qatari prime minister met with President Mohamed Morsi at the Presidential Palace to discuss bilateral relations and regional peace. The two were also set to discuss issues concerning the Arab Peace Committee, which al-Thani had attended in the United States. Al-Thani said the Qatari government is currently reviewing a number of new investment projects in Egypt. During a meeting with Prime Minister Hisham Qandil, al-Thani stated that Qatar would continue to support Egypt and that he was confident in the country’s ability to achieve economic recovery. He praised Egypt’s favorable investment environment which will help to create new job opportunities, increase exports and increase economic growth in the country. [DNE, 4/30/2013]