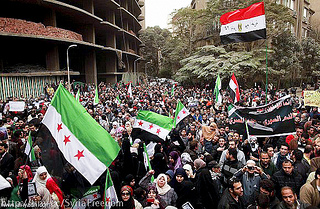 Egyptian President Mohamed Morsi on Saturday announced the "definitive" severing of relations with war-torn Syria, vowing to close the regime’s embassy in Cairo and recall Egypt’s charge d’affaires from Damascus.

Egypt’s Morsi replaces governors; Wave of protests over controversial picks
A reshuffle of seventeen governors on Sunday has drawn protests in governorates across Egypt, with political groups attacking perceived attempts to "Brotherhoodize" the state ahead of June 30 protests. Seven out of the seventeen new governors are linked to Morsi’s Muslim Brotherhood. [Aswat Masriya, Egypt Independent]

Political participation law passed; electoral commission granted right to set poll dates
The Shura Council on Sunday passed a political participation bill after discussing amendments proposed by the Supreme Constitutional Court (SCC). One of the approved articles grants the Supreme Electoral Commission (SEC) the right to set election dates. The president has the authority to call referenda and can set the date of elections if the House of Representatives is dissolved, the article adds. [Daily News Egypt, Ahram Online]

Bible-burning Egyptian cleric jailed for eleven years
A Cairo court handed down a suspended eleven year sentence against an Egyptian Muslim preacher for blasphemy on Sunday for burning a Bible during a protest last year outside the US embassy.The court also sentenced Abu-Islam’s son to eight years in prison (also suspended) and fined him LE 2000 for taking part in burning the Bible with his father. [Aswat Masriya, Ahram Online]

Derna judge murdered outside courthouse
Senior judge Mohammed Naguib was gunned down outside the Derna courthouse on Sunday in a drive-by shooting. This is only the latest in a series of threats and assaults against the judiciary in Derna, many of which are assumed to have come from Salafist militias based in the region. [Libya Herald, Reuters]

Soldiers killed in Benghazi clashes
At least four soldiers and one civilian have been killed after special forces clashed with armed fighters in the eastern port city of Benghazi, the army reported. The clashes came just hours after dozens of protesters forced a brigade of former rebel fighters from their base in Benghazi on Friday evening. The interim leader of Libya’s army warned of a "bloodbath" as the unrest in the city flared up again, a week after clashes in which more than thirty people were killed. [Al Jazeera]

ICC suspends demand for Senussi
The International Criminal Court has postponed its demand that Libya hand over Muammar al-Qaddafi’s security chief and brother-in-law, Abdullah al-Senussi for trial in the Hague on human rights charges. The ICC judges acted after Libya filed a further challenge to the court’s decision that Senussi would not receive a fair trial in Libya and that the Libyan authorities had not been able to mount a proper investigation into the allegations against him. [Libya Herald, 6/16/13]

Libyan guards fire at Egyptian protest on the border
Libyan security forces fired at an Egyptian protest at the Saloum border crossing, but no one was injured. About 200 Egyptians had gathered and reportedly pelted the Libyan side with stones after they allowed twenty trucks loaded with goods to cross into Libya, a market for Egyptian traders. Last week Libyan border guards prevented an Egyptian truck from Saloum from entering Libya. Eight people were injured in clashes that broke out after. [Ahram Online, 6/16/13]

More than seventy Syrian officers defect to Turkey – official
More than seventy Syrian military officers, including six generals and twenty-two colonels, have deserted in the past thirty-six hours and crossed the border into Turkey, the biggest such defection in months, a Turkish official told AFP on Saturday. The defections came after Washington said it had proof that Syrian government forces carried out deadly chemical weapons attacks against rebels and that the United States would begin providing military support to the opposition. [NOW, NaharNet]

Saudi Arabia supplying missiles to Syria rebels – Gulf source
Saudi Arabia began supplying anti-aircraft missiles to rebels "on a small scale" about two months ago, a Gulf source said on Monday. The shoulder-fired weapons were obtained mostly from suppliers in France and Belgium, the source told Reuters. The supplies were intended for General Salim Idris, leader of the Supreme Military Council of the Free Syrian Army (FSA), who was still the kingdom’s main "point man" in the opposition, the source added.  [Reuters]

Russia says it will not allow Syria no-fly zones
Russia, a veto-wielding member of the United Nations Security Council, will not permit no-fly zones to be imposed over Syria, Foreign Ministry spokesman Alexander Lukashevich said on Monday. Lukashevich added that calls for a no-fly zone flouted international law, speaking ahead of planned talks between President Vladimir Putin and US President Barack Obama on the sidelines of a G8 summit in Northern Ireland. [Reuters, NOW]

Hackers and bloggers converge in Tunis to discuss internet freedom
The Tunisian Internet Agency hosted a group of hackers from Tunisia and abroad in its Tunis headquarters to share their experiences and ideas for promoting greater internet freedom. The agency once played the lead role in online censorship before the regime invited them as part of the third annual Freedom Online conference. [Tunisia Live, Al Arabiya]

Tunisia’s Popular Front Coalition welcomes al-Qotb party
The al-Qotb (“Pole”) party has joined Tunisia’s Popular Front coalition, a grouping of left-wing parties including assassinated leftist politician Chokri Belaid’s al-Watad party, after four months of ongoing negotiations. Members of al-Qotb said that they joined the Front to fight against violence and terrorism, to complete the transitional period, to preserve the country’s wealth, and to alleviate the suffering of the poor. [Tunisia Live]

State weighs options for confronting ‘Salafi rebellion’
Salafi jihadi organizations, and individuals whose views reflect those of al-Qaeda, have grown in prominence in Tunisia in an unprecedented manner. Will the current socio-political and security atmosphere transform Tunisia from a modern country into a hub for terrorist or Salafi jihadi activity? [Al Arabiya Institute for Studies, Washington Post]

Dutch couple missing in Yemen probably kidnapped – police source
A Dutch woman and her husband have been missing for a week in Yemen and are likely to have been kidnapped, a police source in the capital Sanaa said on Saturday. The source said the woman works as a researcher in Yemen and disappeared with her husband after they left their home in Sanaa’s Hadda district, which houses many diplomatic missions. [Reuters/Al Arabiya]

National Security releases seven detained Houthis
Seven detained Ansar Allah members have been released following last Sunday’s clashes between members of the Houthi group and National Security Forces that left thirteen dead and over one hundred injured. Demonstrators were gathered to protest the continued detention of Ansar Allah members. Ali al-Bukhaiti (representative of the Ansar Allah movement in the National Dialogue Conference) said that pressure from demonstrators and NDC members led to the release of some Ansar Allah detainees. [Yemen Times]

Hamas calls on Hezbollah to pull fighters out of Syria
The Palestinian Hamas movement on Monday urged Lebanese militant group Hezbollah to withdraw its forces from Syria and focus on fighting Israel instead, in a statement on a leader’s Facebook page. The statement by Moussa Abu Marzouk, a Cairo-based Hamas leader, also stated that Hezbollah’s involvement in Syria had stoked sectarian conflict in the region. The call marks a further deterioration in relations between Hamas and Hezbollah.  [Reuters, International Middle East Media Center]