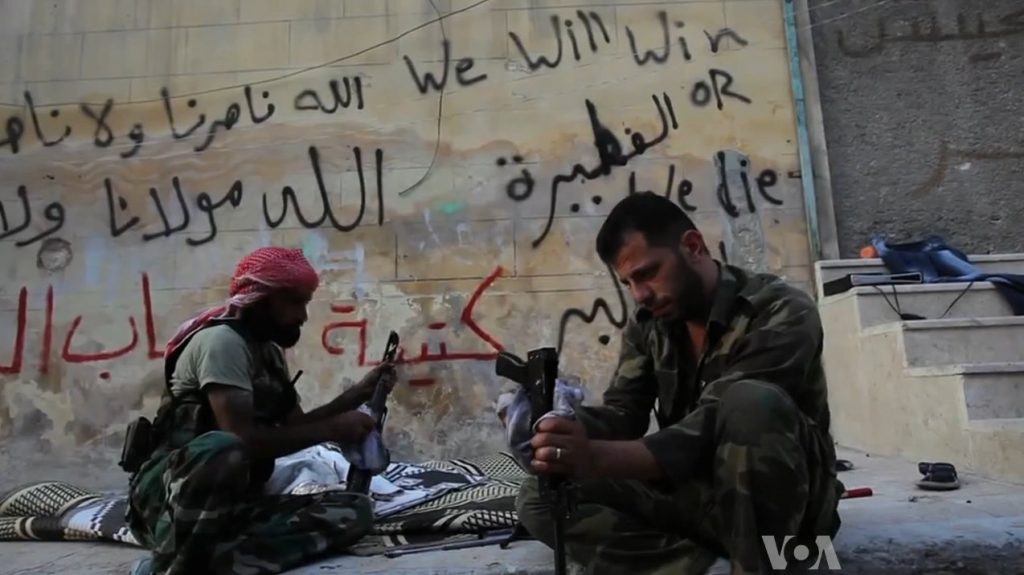 Britain and France are free to supply weapons to Syrian rebels fighting President Bashar al-Assad from August, after attempts to renew an EU arms embargo on Syria failed on Monday.

President refers NGOs law to Shura Council
Egypt’s presidency referred the final draft of a proposed NGO law to the Shura Council for deliberation, having changed a handful of controversial articles included in previous drafts of the bill. The presidency also announced it would discuss the amendments at a press conference on Tuesday afternoon. [Aswat Masriya, Ahram Online, Reuters, AP]

Libya denies Niger attacks launched from its territory
Libya dismissed on Monday Niger’s assertion that the Islamist insurgents who attacked an army base and a uranium mine there last week had come its desert south, an area many countries fear has become a safe haven for militants. [Reuters]

Majority of Libyans want decentralization: ministry survey
More than half of Libyans want to see a decentralized country, according to a constitutional survey sponsored by  Ministry of Higher Education and Scientific Research. The results of the “Comprehensive National Survey on Libyans’ Opinions on the Constitution” were presented today at the Rixos Hotel.  A representative total of 2,042  Libyans had been asked what they wanted to see in the new draft constitution. The idea of a decentralized Libya was backed by 57 percent of respondents. [Libya Herald]

Libyan Prime Minister visits NATO
NATO Secretary General Anders Fogh Rasmussen told Libya’s Prime Minister Ali Zeidan on Monday (27 May 2013) that the Alliance was proud of the role NATO played to protect the Libyan people and to fulfill the historic mandate of the United Nations Security Council. Stressing NATO’s expertise in the reform of security and defence sectors, especially when it comes to institutional education and training, Mr Fogh Rasmussen told the Prime Minister: “We stand ready to help the Libyan government in these areas, where you need us and where we can add value.” The Secretary General said, “I am confident we can develop our relationship to help build the new Libya, as a safe and secure country.” [NATO News]

Emirates to resume services to Libya
Emirates will restart passenger flights to Tripoli from September 1, 2013, illustrating Libya’s importance in Emirates’ global network and the airline’s commitment to the country. Emirates’ three-weekly flights to Tripoli, served by a Boeing 777-200ER in a three-class configuration, will make a quick stop in Malta every Sunday, Tuesday, and Thursday. [Gulf News]

Rockets hit Hezbollah controlled areas in Beirut
The Lebanese capital has lurched ever closer to a long-feared sectarian spillover from the Syrian war after a rocket attack pummeled Beirut’s southern suburbs near the heartland of Hezbollah. Additionally,  gunmen killed three Lebanese soldiers at an army checkpoint in the eastern Bekaa Valley on Tuesday before fleeing towards the Syrian border, Lebanese officials said. [Guardian, Reuters]

11 killed as Syria rebels, Kurds clash: watchdog
Eleven rebels have been killed in clashes in northern Syria with Kurdish rebels of the main Kurdish Democratic Union Party (PYD), the Syrian Observatory for Human Rights said on Sunday. There were also reported clashes in the same area of Aleppo province several days previously at a checkpoint installed by rebel forces south of the town of Kubani. This comes as Syrian Kurds are pushing to be part of the Geneva peace talks.  [Daily Star, NOW]

Protesters with controversial group detained; legality of arrests disputed
Nine supporters of the Leagues for the Protection of the Revolution (LPR) were detained this weekend during demonstrations in Tunis. The government and the Leagues dispute the legality of the arrests. Demonstrators with the Leagues were detained for several hours on Friday after protesting in the Tunis suburb of Kram, LPR spokesman Nasreddine Wazfa told Tunisia Live. [Tunisia Live]

Three members leave constitution drafting committee in protest
Three members of the parliamentary committee charged with drafting the constitution have withdrawn over what they consider restrictions on key freedoms and rights in the current draft. The members of the Joint Committee for Coordination and Drafting claim that the ruling Ennahdha party has “reneged” on agreements reached by the end of the National Dialogue related to the inclusion of union rights, freedom of belief, and the right to protest in the constitution, according to state news agency TAP. [Tunisia Live]

Draft constitution to be submitted to constituent assemblies ‘within two days’
The draft constitution will be submitted to constituent commissions "within two days," National Constituent Assembly (NCA) President Mustapha Ben Jaafar was quoted as saying by an NCA press release issued on Monday. Receiving representatives of National Dialogue partner organizations, Ben Jaafar deemed "positive" the pressure put on by parties and civil society to expedite drafting of the constitution. [All Africa]

John McCain meets with Yemeni president
Today President Hadi welcomed Senator John McCain during his visit to Sanaa. They discussed  the progress of Yemen’s political transition, with McCain emphasizing US support for President Hadi, praising Yemen’s decision to “take the peaceful route” during its revolution, and noting that it is an exemplary model for the region. [Saba (Arabic)]

Hadi welcomes Obama’s plans to repatriate Yemeni detainees
President Hadi welcomed President Obama’s speech on Thursday in which he outlined plans to close Guantanamo Bay and repatriate cleared Yemeni prisoners, saying that Yemen will work “in joint cooperation with the US” to “rehabilitate and reintegrate them into society.” [Al-Masdar (Arabic)]

Qatar seeking to send Yemeni soldiers into Syria
Qatar, which has been a staunch supporter of the Free Syrian Army against President Bashar al-Assad in Syria, is reportedly now looking to recruit 10,000 of Yemen’s Republican Guards to fight alongside other Arab-backed militias in a bid to offset Assad’s recent advances against the opposition. [Yemen Post]

Jail sentence overturned in Kuwait leader insult
An opposition activist in Kuwait says an appeals court has overturned a five-year prison sentence against a former parliament member for insulting the Gulf nation’s ruler. Monday’s decision does not clear Musallam al-Barrack, who still faces the charges and has a new sentencing hearing next month. But it helps ease an escalating political confrontation between al-Barrack’s supporters and the Western-backed rulers in Kuwait. [Daily Star]

Iraq death toll passes 500 in May
Violence in Iraq has killed more than 500 people in May, AFP figures showed on Tuesday, as authorities struggled to contain a wave of unrest that has raised fears of all-out sectarian conflict. As of Tuesday, 507 people were killed and 1,287 wounded, making May the deadliest month in at least a year. [Daily Star]